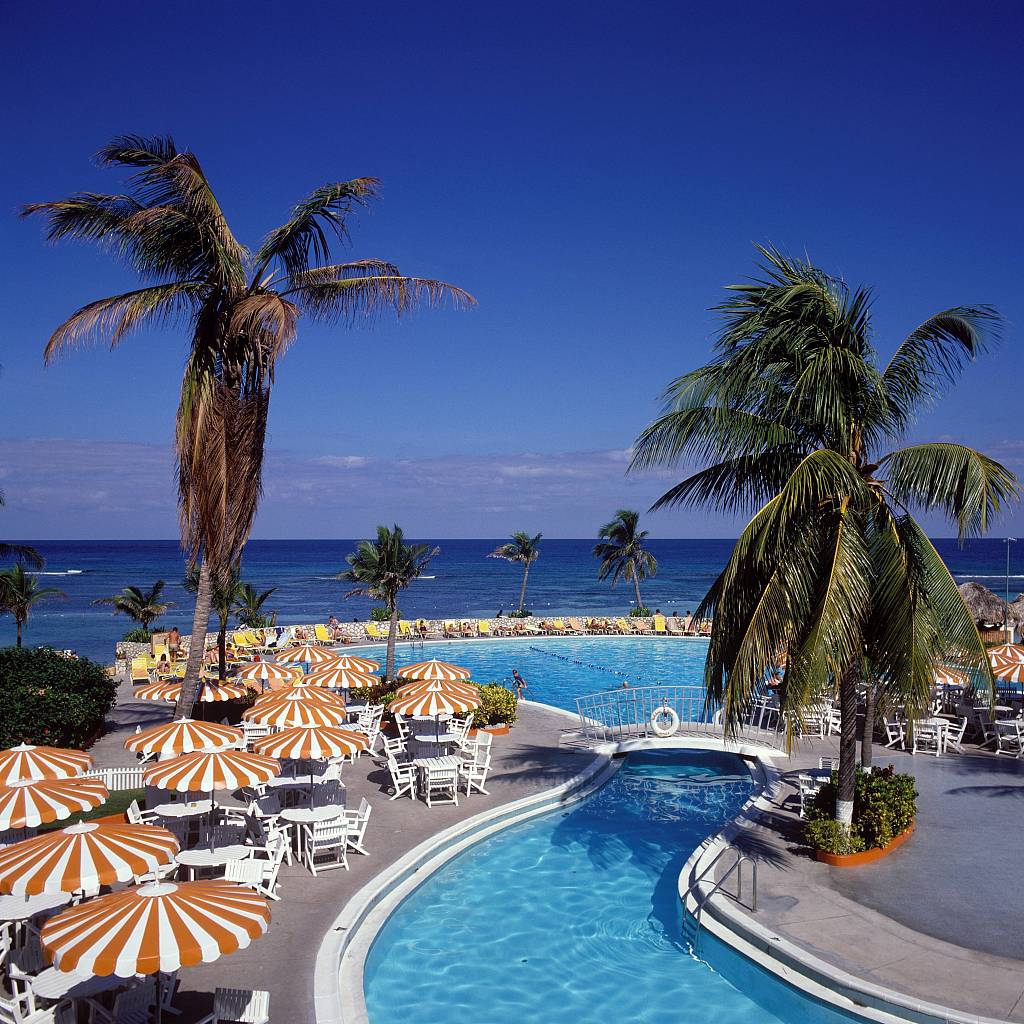 Jamaica is an island country, and the third largest island of the West Indies, situated south of Cuba. Jamaica has a maximum length, from east to west, of 234 kilometers; the maximum width is 82 kilometers. The total area of the country is 10,991 square kilometers. Kingston is the capital and largest city of Jamaica, and also a large commercial seaport.

The terrain of Jamaica is mountainous, except for several tracts of lowlands in the southern coastal area. The principal range, situated in the eastern section of the island, is the Blue Mountains, of which Blue Mountain Peak (2,256 meters) is the highest point on the island. The coastline, 1,022 kilometers long, is irregular, particularly in the south, and the island has a number of excellent natural harbors, including those at Kingston, Saint Ann's Bay, Montego Bay, and Port Maria.

The Jamaican economy is heavily dependent on services, which now account for over 60% of GDP. The country continues to derive most of its foreign exchange from tourism, remittances, and bauxite/alumina.

2017 main economic data are as follows:

Resources: Mineral deposits in Jamaica include gypsum, lead, and salt. The bauxite deposits in the central section of the island are among the richest in the world. Rich soil is found on the coastal plains. Jamaica is party to several regional agreements on conservation of marine resources and combating oil pollution in the Caribbean Sea. It ratified the World Heritage Convention in 1983.

Jamaica has a two-party political system. The People's National Party (PNP) is socialist in orientation, and the Jamaica Labor Party (JLP) supports free enterprise in a mixed economy.

Jamaica is a member of the United Nations, the Organization of American States and the Commonwealth of Nations, and one of the founding members of the Caribbean Community. 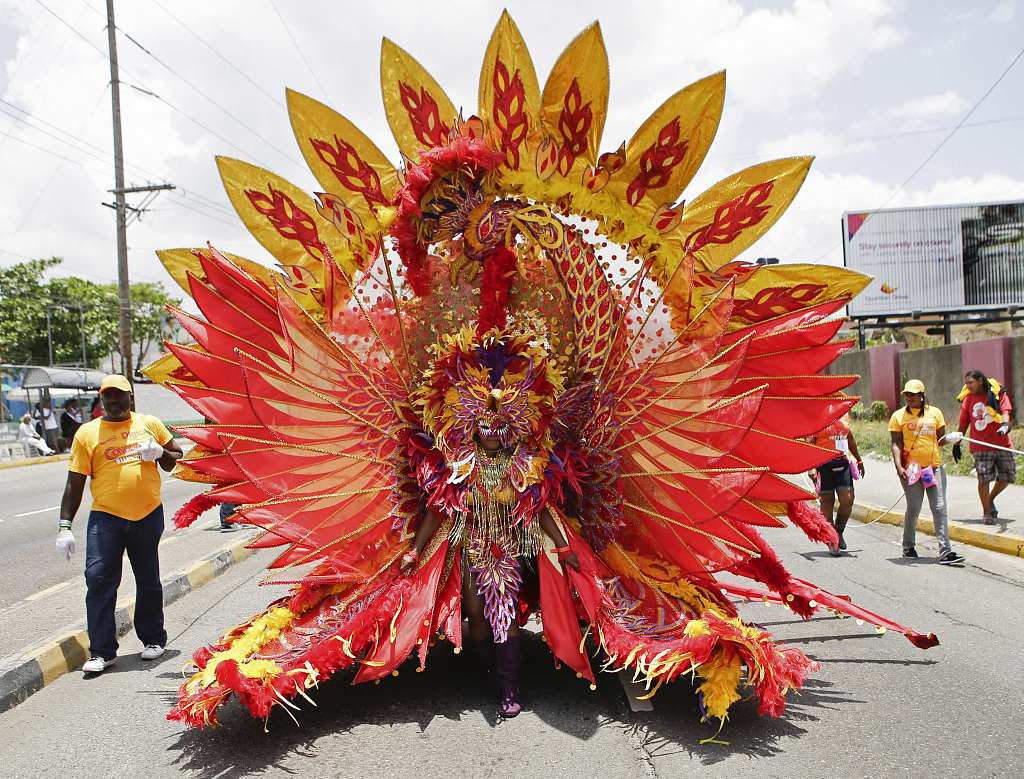 The Carnival Queen wearing her "Phoenix" costume is pictured during the Jamaica Carnival Roadmarch in Kingston April 27, 2014. (Photo: VCG)

The position of Jamaica as a dependency of Britain for more than 300 years is reflected in both language and customs, which are combined with African influences. Reggae, a distinctively syncopated style of Jamaican music, much of it highly political, was popularized in the 20th century by Bob Marley and others. It was a pervasive influence on rock music in the 1980s, especially in Britain.

The People's Republic of China and Jamaica formally established diplomatic relations on November 21, 1972. In 1973, China opened its Embassy in Jamaica. 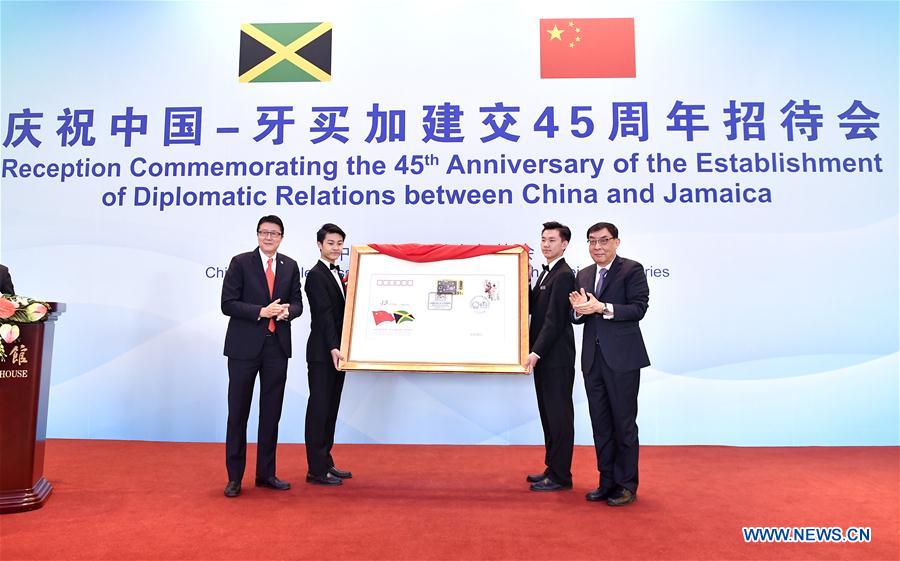 Ma Peihua, vice chairman of the National Committee of the Chinese People's Political Consultative Conference, and Jamaica's Ambassador to China Antonia Hugh attend a reception to mark the 45th anniversary of the establishment of diplomatic relations between China and Jamaica, in Beijing, capital of China, Nov. 21, 2017. (Xinhua/Yan Yan)

Over the past decades since the establishment of diplomatic ties, bilateral friendly relations and cooperation in the political, economic, cultural, military and other fields have developed steadily. In international affairs, the two countries share much common ground and common interests and have always supported and closely cooperated with each other.

The partnership between the two countries has resulted in many tangible outcomes, such as the acquisition of Alpart in 2016 by Jiuquan Iron and Steel Company (JISCO) and the proposed development of an industrial park and special economic zone alongside the JISCO/Alpart operations in Nain, St Elizabeth.

The cooperation between the two countries also includes the western children’s hospital project, completion of two state-of-the-art early-childhood institutions in 2018, as well as the Bright Journey Eye Care Mission now under way at the Kingston Public Hospital (KPH), where hundreds of people are receiving cataract surgeries.

Hundreds of Jamaicans have travelled to China on scholarships and training program annually and have returned to the island to contribute to national development.

Jamaica is the fifth Caribbean nation to sign on to the BRI. Jamaica is poised to benefit from significant economic and infrastructural development initiatives under a new Memorandum of Understanding (MOU) with the People’s Republic of China. Minister of Foreign Affairs and Foreign Trade, Senator the Hon. Kamina Johnson Smith, and Chinese Ambassador to Jamaica, His Excellency Tian Qi, signed the agreement under the Belt and Road Initiative (BRI), at the Ministry’s New Kingston offices on April 11, 2019.