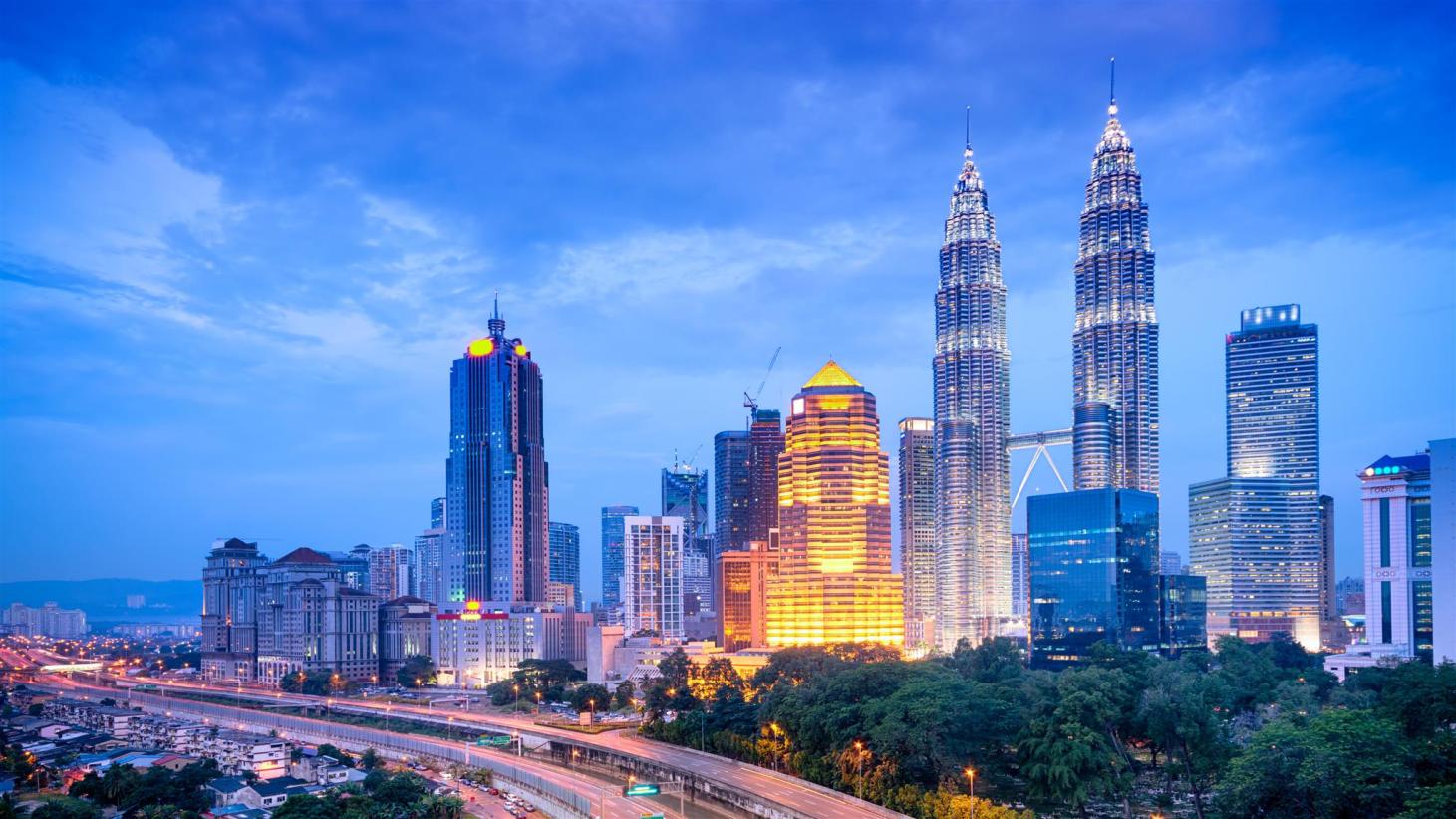 Malaysia has land borders with Thailand in West Malaysia, and Indonesia and Brunei in East Malaysia. It is linked to Singapore by a narrow causeway and a bridge. The country also has maritime boundaries with Vietnam and the Philippines. The land borders are defined in large part by geological features such as the Perlis River, the Golok River and the Pagalayan Canal. Some of the maritime boundaries are the subject of ongoing contention.

East Malaysia, on the island of Borneo, has a coastline of 2,607 km. It is divided between coastal regions, hills and valleys, and a mountainous interior. The highest mountain ranges form the border between Malaysia and Indonesia. Sarawak contains the Mulu Caves, the largest cave system in the world, in the Gunung Mulu National Park which is also a World Heritage Site.

Located near the equator, Malaysia's climate is categorized as equatorial, being hot and humid throughout the year. The average rainfall is 250 centimeters a year and the average temperature is 27 °C. Malaysia faces two monsoon winds seasons, the Southwest Monsoon from late May to September, and the Northeast Monsoon from October to March.

Malaysia is located on the Sunda shelf, and is tectonically inactive. The oldest rocks in the country date from 540 million years ago, and are mostly sedimentary. The most common form of rock is limestone, formed during the Paleozoic Era. Malaysia has the 29th longest coastline in the world. The two distinct parts of Malaysia, separated from each other by the South China Sea, share a largely similar landscape in that both West (Peninsular) and East Malaysia feature coastal plains rising into hills and mountains.

Malaysia is a relatively open state-oriented and newly industrialized market economy. The state plays a significant but declining role in guiding economic activity through macroeconomic plans. Malaysia has had one of the best economic records in Asia, with GDP growing an average 6.5 percent annually from 1957 to 2005. The economy of Malaysia in terms of gross domestic product (GDP) at purchasing power parity (PPP) in April 2019 was estimated to be $999.397 billion, the third largest in ASEAN and the 25th largest in the world.

International trade, facilitated by the shipping route in adjacent Strait of Malacca, and manufacturing are the key sectors. Malaysia is an exporter of natural and agricultural resources, and petroleum is a major export. Malaysia has once been the largest producer of tin, rubber and palm oil in the world. Manufacturing has a large influence in the country's economy, although Malaysia's economic structure has been moving away from it. Malaysia remains one of the world's largest producers of palm oil.

Malaysia's energy infrastructure sector is largely dominated by Tenaga Nasional, the largest electric utility company in Southeast Asia, with over RM99.03 billion ($dx.zz) of assets. Malaysia's road network is one of the most comprehensive in Asia and covers a total of 144,403 kilometers. Malaysia has 118 airports, of which 38 are paved. The national airline is Malaysia Airlines, providing international and domestic air services.

Malaysia's main newspapers are owned by the government and political parties in the ruling coalition, although some major opposition parties also have their own, which are openly sold alongside regular newspapers. A divide exists between the media in the two halves of the country. Peninsular-based media gives low priority to news from the East, and often treats the eastern states as colonies of the Peninsula. The media have been blamed for increasing tension between Indonesia and Malaysia, and giving Malaysians a bad image of Indonesians. The country has Malay, English, Chinese, and Tamil dailies.

Since conventional media is so tightly controlled by the government, Malaysia has a lively alternative media scene, characterized by such news portals as Malaysiakini and The Malaysian Insider which take advantage of the government's pledge not to censor the Internet despite its stranglehold on most mass media outlets.

In Malaysia, mass vaccination is practiced in public schools. The vaccines may be administered by a school nurse or a team of other medical staff from outside the school. All the children in a given school year are vaccinated as a cohort.

Malaysia became the first ASEAN country to establish diplomatic ties with China on May 31, 1974.

The bilateral ties have developed with the partnership between the two countries remaining constant over the years thanks to their adherence to the principle of non-interference in each other's internal affairs and striving to be good neighbors.

Chinese tourists who visited Malaysia in 2018 increased by 29 percent, achieving a record of 2.94 million visitors, surpassing 2.28 million visitors in the entire of 2017.

The value of bilateral trade reached a record high of $108.6 billion in 2018 while the number of tourist arrivals from China to Malaysia increased by nearly 30 percent to just short of 3 million.