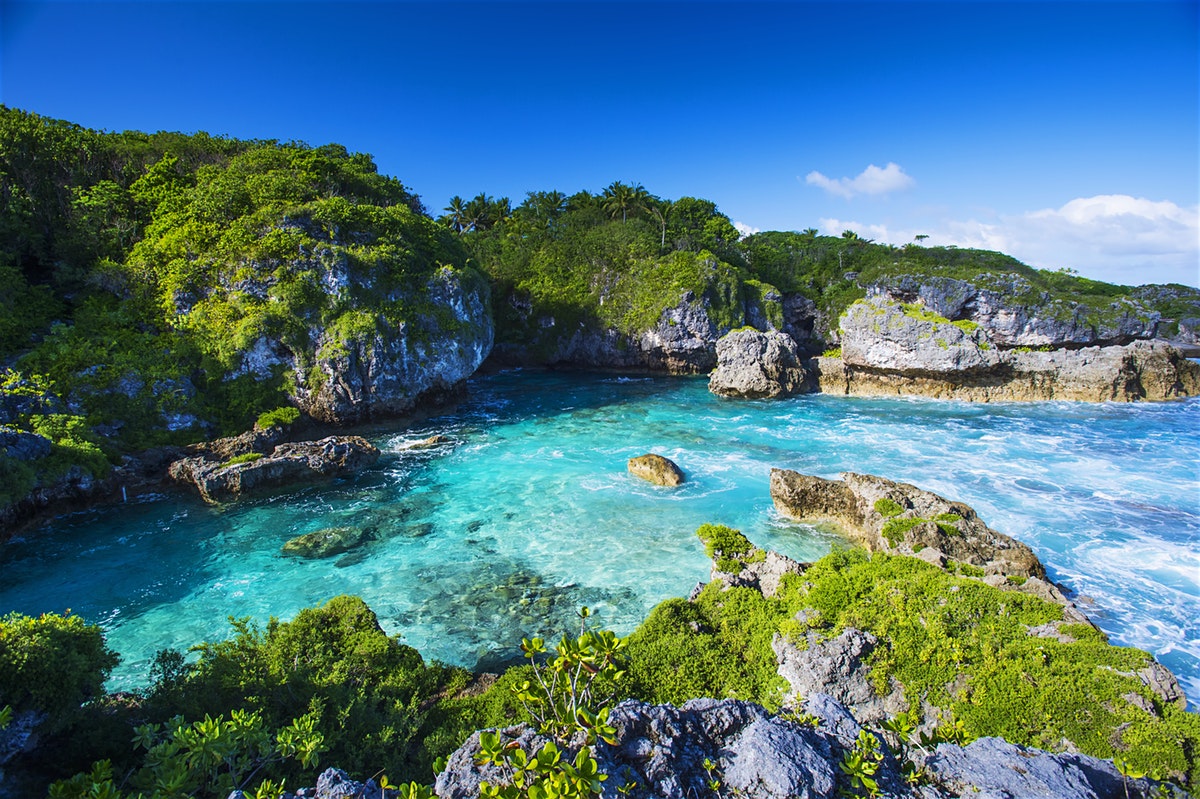 Niue is a 269 square km raised coral atoll in the southern Pacific Ocean, east of Tonga. There are three outlying coral reefs within the Exclusive Economic Zone, with no land area. Niue is one of the world's largest coral islands. The terrain consists of steep limestone cliffs along the coast with a central plateau rising to about 60 meters above sea level. A coral reef surrounds the island, with the only major break in the reef being in the central western coast, close to the capital, Alofi. A notable feature is the number of limestone caves near the coast.

According to the World Health Organization, residents are evidently very susceptible to skin cancer. In 2002 Niue reported skin cancer deaths at a rate of 2,482 per 100,000 people–far higher than any other country. Niue is separated from New Zealand by the International Date Line. The time difference is 23 hours during the Southern Hemisphere winter and 24 hours when New Zealand uses Daylight Saving Time.

A leader in green growth, Niue is also focusing on solar power provision, with help from the European Union. However, Niue currently deals with one of the highest rates of greenhouse gas production per capita in the world. Niue aims to become 80% renewable by 2025.

Niue's economy is small. Its gross domestic product (GDP) was NZ$17 million in 2003, or US$10 million at purchasing power parity. Niue uses the New Zealand dollar. The Niue Integrated Strategic Plan (NISP) is the national development plan, setting national priorities for development. Cyclone Heta set the island back about two years from its planned timeline to implement the NISP, since national efforts concentrated on recovery efforts.

The government and the Reef Group from New Zealand started two joint ventures in 2003 and 2004 to develop fisheries and a 120-hectare noni juice operation. Noni fruit comes from Morinda citrifolia, a small tree with edible fruit. Niue Fish Processors Ltd (NFP) is a joint venture company processing fresh fish, mainly tuna, for export to overseas markets. NFP operates out of a state-of-the-art fish plant in Amanau Alofi South, completed and opened in October 2004.

Niue is negotiating free trade agreements with other Pacific countries, PICTA Trade in Services (PICTA TIS), Economic Partnership Agreements with the European Union, and PACERPlus with Australia and New Zealand. In August 2005, an Australian mining company, Yamarna Goldfields, suggested that Niue might have the world's largest deposit of uranium. By early September these hopes were seen as overoptimistic, and in late October the company cancelled its plans, announcing that exploratory drilling had identified nothing of commercial value.

Remittances from expatriates were a major source of foreign exchange in the 1970s and early 1980s. Continuous migration to New Zealand has shifted most members of nuclear and extended families there, removing the need to send remittances back home. Foreign aid has been Niue's principal source of income. Although most aid comes from New Zealand, this is currently being phased out with reductions of NZ$250,000 each year. The country will need to rely more upon its own economy. The government generates some revenue, mainly from income tax, import tax and the lease of phone lines.

Education in Niue is free and compulsory for 8 years. Niue has one primary school, and in 1995, the gross and net primary enrollment rates were both 100 percent. The government has collaborated with UNESCO to develop an Education for All plan to improve learning achievements and provide better educational opportunities for children with special needs.

Niue has two broadcast outlets, Television Niue and Radio Sunshine, managed and operated by the Broadcasting Corporation of Niue, and one newspaper, the Niue Star.

On October 18, 2008, Zhang Limin, China's first ambassador to Niue, presented his credentials to Niue Prime Minister Toke Talagi in the capital of Alofi.

China and the Pacific Island Countries agreed to strengthen their mutually-beneficial cooperation in the field of agriculture on March 29, 2019.