Commercial capital: Colombo, with a population of 753,000

Location: Indian Ocean to the southwest of the Bay of Bengal and to the southeast of the Arabian Sea. The northwestern island is geographically separated from southeastern India  by the Palk Strait.

Climate: Tropical and warm. Due to being close to the equator, the weather is warm all the year-round, and the annual average temperature is 28 C. Affected by the Indian Ocean monsoon, the southwestern coastal area is humid. The average annual precipitation is 1,757 millimeter (2017).

Culture: The culture of Sri Lanka dates back over 2,500 years. Sri Lanka is a multi-religious country. Buddhism is the country’s main religion, which was officially introduced in the third century B.C., constituting the majority with 69.3%. Other religious groups are Hindus 15.5%, Muslims 7.6% and Christians 7.5%, according to gov.lk.

Legislative power is exercised by a parliament, elected by universal franchise on a proportional representation basis. A president, who is also elected by the people, exercises executive power including defense. Sri Lanka enjoys a multiparty system, and the people vote to elect a new government every six years.

Sri Lanka is mainly an agricultural country. The chief crops are tea, rubber, coconut and rice, with tea being a major foreign exchange earner. Its industrial foundation is weak and the main economic sectors are agricultural products, tourism and clothing. It was the first South Asian country to liberalize its economy. In 1978, the country began to adopt an opening up policy and attract foreign investment, and promote privatization to shape a market economy.

The structure of the exports have shifted recently, from agricultural products to industrial products, including textiles, clothing, tea, rubber and its products, and jewelries. Sri Lanka has maintained a moderate growth in recent years and achieved a growth of 6% or more for four consecutive years from 2005 to 2008. 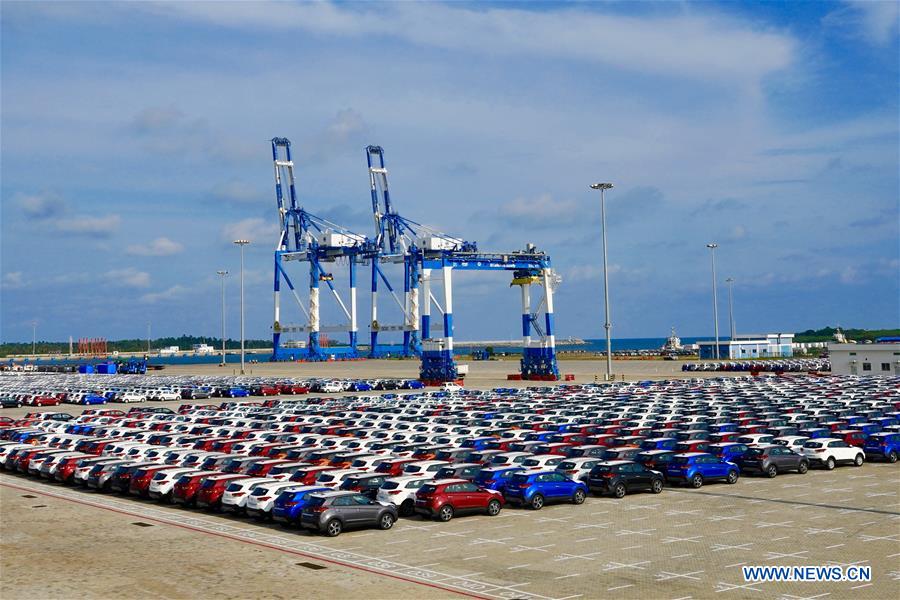 Sri Lanka was among the first countries to recognize the People's Republic of China in January 1950. It established diplomatic ties with China on February 7, 1957. Due to its strategic position in the Indian Ocean, its friendship with China has lasted for centuries from the ancient Silk Road. It is also a firm supporter and active participant in the Belt and Road Initiative proposed by China.

In 2013, the two countries established a strategic cooperative partnership and made new progress in pragmatic cooperation in various sectors.

High-level exchanges between the two countries were frequent.

In March 2013, Sri Lanka’s then President Mahinda Rajapaksa sent a letter of congratulation to President Xi Jinping on his taking office and had a telephone conversation with Xi.

In May 2013 Rajapaksa paid a state visit to China, during which he met with Xi. The two sides issued the Joint Communiqué of the People's Republic of China and the Democratic Socialist Republic of Sri Lanka, and agreed to build a strategic cooperative partnership of sincere mutual assistance and everlasting friendship.

In June 2013, then prime minister Jayaratne came to China for the first China-South Asia Expo. In August that year, Jayaratne attended the closing ceremony of the Second Asian Youth Games held in China.

In September 2014, Chinese President Xi Jinping paid a state visit to Sri Lanka and said that China regards Sri Lanka as an all-weather friend and partner. Xi and his counterpart, then Sri Lankan president Mahinda Rajapaksa, attended the opening ceremony of the Colombo Port City Project, marking the inauguration of a large construction project undertaken by the China Harbor Engineering company.

On January 9, 2015, Maithripala Sirisena won the Sri Lanka presidential election. Chinese President Xi Jinping sent a congratulatory message to him on his election.

In March 2015, Sirisena paid a four-day state visit to China and attended the Boao Forum for Asia Annual Conference under the theme of “Asia’s New Future: Toward a Community of Common Destiny.”

During his visit, Sirisena met with President Xi in Beijing. He appreciated the assistance given by China and said that Sri Lanka would utilize more direct investment by China into the State and private sectors than the previous era of the country. Xi said that China wants to strengthen ties between the two countries and take cooperation to a higher level.

On October 16, 2016, President Xi met with President Sirisena on the sidelines of the eighth BRICS summit in the western Indian state of Goa. Both leaders vowed to deepen bilateral ties of the two countries.

On February 7, 2017, Xi and Sirisena exchanged congratulatory messages, marking the 60th anniversary of the establishment of diplomatic relations between both countries.

On May 14-15, 2017, Sri Lankan Prime Minister Ranil Wickremesinghe attended the Belt and Road Forum for International Cooperation in Beijing and met with Chinese President Xi. Wickremesinghe said Sri Lanka is committed to consolidating its traditional friendship with China and deepening bilateral cooperation in a variety of areas.

On February 4, 2018, Chinese President Xi Jinping sent a message to Sirisena, congratulating Sri Lanka on the 70th anniversary of its independence from British colonial rule in 1948, and calling for better development of their strategic cooperative partnership.

On March 19, 2018, President Sirisena sent a congratulatory letter to Xi, extending warm congratulation to Xi for his re-election as the president of China.

On August 28, 2018, Chinese Ambassador to Sri Lanka Cheng Xueyuan called upon President Sirisena and handed over a letter of birthday greetings from President Xi. On the same day, Sirisena replied a letter of thanks through the Chinese Embassy and expressed deep gratitude to Xi for the warm greetings extended.