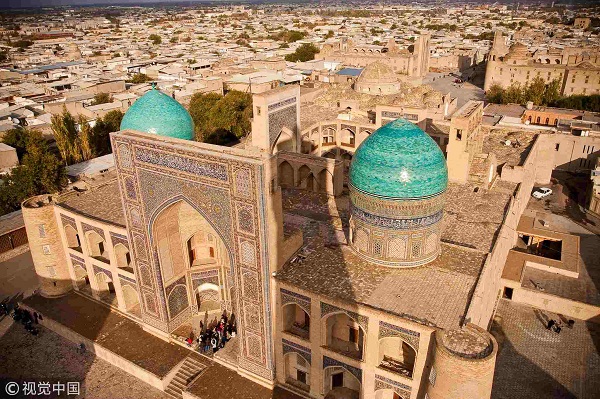 Full name: The Republic of Uzbekistan

Location: Located in the hinterland of Central Asia, Uzbekistan’s all five neighboring countries have no seaports. Uzbekistan is bordered by Afghanistan in the south, Kazakhstan in the north and northeast, Kyrgyzstan and Tajikistan in the east and southeast, and Turkmenistan in the west.

Language: Uzbek is the official language and Russian is a lingua franca in Uzbekistan.

At the beginning of independence, Uzbekistan’s first president, Islam Karimov, proposed the “five principles” of building a country according to the “Uzbek model of development”: economic priority, state coordination, law supremacy, gradual progress and social security. Under the guidance of the “five principles”, Uzbekistan is committed to rejuvenating the national spirit and religious traditions, improving social tolerance, enhancing inter-ethnic compatibility, and implementing social security for vulnerable groups. At the same time, safeguarding national security is one of the main tasks of the country.

After taking office as the president of Uzbekistan, Shavkat Mirziyoyev announced to follow the “Uzbek model of development” and formulate five major priorities for national development in 2017-2021, accelerating the reform of the economic, judicial, and administrative fields, opening online public complaints and proposals channels and responding to the public in a timely manner.

Uzbekistan’s pillar industries of the national economy are gold, cotton, oil and natural gas. After taking office, Uzbek President Shavkat Mirziyoyev took a series of measures in the area of economic openness, economic liberalization and attracting foreign investment, keeping Uzbekistan’s economy an upward momentum. According to the data released by the Uzbekistan National Statistical Committee in January 2018, Uzbekistan's GDP in 2017 was 249.14 trillion Som, an increase of 5.3 percent year-on-year, per capita GDP 7,692,000 Som, an increase of 3.6 percent year-on-year. The contribution rate of the private economy to GDP was 81 percent, state-owned economy to GDP was 19 percent, and the annual inflation rate was 14.4 percent.

The year 2013 was the first year of the strategic partnership between the People's Republic of China and the Republic of Uzbekistan. Bilateral relationship entered its third decade and a new stage of development.

The two countries enjoyed close high-level exchanges. From 8 to 10 September, President Xi Jinping paid a state visit to Uzbekistan. He held talks with Uzbek President Islam Karimov and visited the historical and cultural city of Samarkand with President Karimov's company. The two presidents signed and issued the Joint Declaration Between the People's Republic of China and the Republic of Uzbekistan on Further Developing and Deepening the Strategic Partnership and signed the Treaty on Friendship and Cooperation Between the People's Republic of China and the Republic of Uzbekistan. They also witnessed the signing of nine documents including the intergovernmental transit agreement for Line D of the China-Central Asia Gas Pipeline, the agreement on jointly opening a Confucius Institute in Samarkand and the MOU on mutual provision of diplomatic premises and land lots. From 28 to 29 November, Premier Li Keqiang attended the 12th Meeting of the Council of Heads of Government of the SCO in Uzbekistan. He met with President Islam Karimov and held talks with Prime Minister Shavkat Mirzieev. From 30 to 31 October, Meng Jianzhu, member of the Political Bureau of the CPC Central Committee and Secretary of the Political and Legal Affairs Committee of the CPC Central Committee, went to Uzbekistan for the second session of the Chinese-Uzbek Intergovernmental Cooperation Committee, where he met with President Karimov and held talks with First Deputy Prime Minister and Finance Minister Rustam Azimov. On 29 April, State Councilor and Minister of Public Security Guo Shengkun met with Secretary of the Security Council of Uzbekistan Bahodir Tashmatov during the Eighth Meeting of the Secretaries of the Security Council of the SCO. On 22 September, Vice Chairman of the Central Military Commission General Fan Changlong met with Uzbek Defense Minister Kabul Bediev during his official visit to China, and State Councilor and Defense Minister Chang Wanquan held talks with him.

Practical cooperation between the two countries developed fast. China became Uzbekistan's second largest trading partner and largest investor. The two sides successfully held the second session of the Chinese- Uzbek Intergovernmental Cooperation Committee, and established a subcommittee on agricultural cooperation and convened its first meeting. The construction of the Uzbek section of Line C of the China-Central Asia Gas Pipeline entered the final phase. The two sides signed the intergovernmental agreement on Line D of the China-Uzbekistan Gas Pipeline. Smooth progress was made in major projects such as the soda plant, potash fertilizer plant and power plant upgrade.

Sub-national exchanges and cultural cooperation further increased. The Chinese city of Xi'an in Shaanxi Province became a sister city of Samarkand of Samarkand Province. The second Confucius Institute in Uzbekistan will be launched in Samarkand. A Chinese Language Cultural Center was set up in the Uzbekistan State University of World Languages.

China is willing to develop all-weather friendship with Uzbekistan on the path of their reform and revitalization to realize common prosperity, Chinese President Xi Jinping said.

Xi made the remarks when meeting with his Uzbek counterpart Shavkat Mirziyoyev, who is in the coastal city of Qingdao to attend the 18th Shanghai Cooperation Organization summit.

China and Uzbekistan are good neighbors that stand together in weal and woe, good friends with sincerity and mutual trust as well as good partners that cooperate for mutual benefits, Xi said.

The China-Uzbekistan comprehensive strategic partnership has witnessed sustained and in-depth development over recent years, and major consensuses reached between the two heads of state have seen solid implementation, he said.

Socialism with Chinese characteristics has entered a new era, and Uzbekistan has unveiled and implemented a series of reform measures. China is willing to develop all-weather friendship with Uzbekistan on the path of their reform and revitalization to realize common prosperity, Xi said.

Uzbekistan is a country that first supports and participates in the development of the Belt and Road Initiative, Xi said, adding the two countries' cooperation on the Belt and Road has yielded fruitful results.

He said both countries should seize the opportunity and tap the potential to steadily expand bilateral trade, deepen cooperation in fields including production capacity, investment and connectivity, enhance law enforcement and security cooperation, and strengthen people-to-people and cultural exchanges.

Mirziyoyev said the bilateral relations are experiencing all-round development and at their best level in history at present.

The bilateral cooperation consensuses reached between the two leaders have been implemented, bringing tangible benefits to Uzbek people, Mirziyoyev said.

Uzbekistan firmly adheres to the one-China policy, resolutely supports China's efforts in combating the "three evil forces" of terrorism, separatism and extremism, and is willing to enhance pragmatic cooperation with China under the Belt and Road framework, and boost communication and coordination on affairs in the region, Mirziyoyev said.