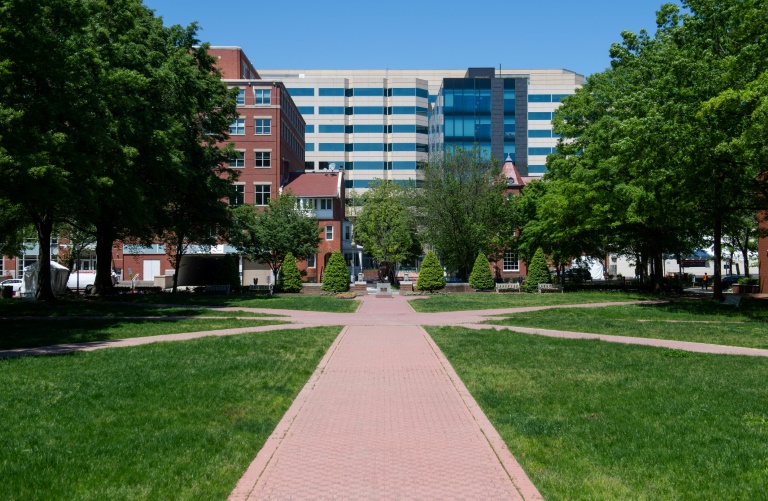 The campus of George Washington University is nearly empty as in-person classes have been canceled due to the coronavirus pandemic -- but students say they are being shortchanged, with distance learning, not a comparable substitute. (Photo: AFP)

The cost of university education in the United States has long been eye-watering, with a year costing tens of thousands of dollars.

But as the coronavirus crisis settles in, students -- many of whom take out huge loans to finance their degrees -- are wondering how to justify spending $70,000 a year on... Zoom classes.

They feel like they're getting the raw end of the deal, and are demanding that their colleges be held to account.

"We're paying for other services that the campus offers that aren't digitized," says Dhrumil Shah, who is doing a Master's degree in public health at George Washington University.

The 24-year-old relied in part on loans to pay for his two-year program in the US capital. In a few days, he will earn his diploma, but there will be no traditional graduation ceremony.

Shah has signed one of several petitions demanding some kind of reimbursement from the school.

"I think the quality of service has decreased," Shah, a native of Chicago, told AFP.

He complains that the shift to distance learning due to stay-at-home orders in effect in Washington to curb the spread of the deadly virus has resulted in a loss of structure and supervision.

"It sets up the person going through that experience for failure," he says, admitting he's become "drastically" unproductive without the accountability of in-person classes.

Shah is not alone. Many students have lamented that their quintessential American college experience has been lost -- no sunny afternoons on college quads playing frisbee, no classes in high-tech labs, no crazy nights out.

Molly Riddick also signed a petition demanding that her school, New York University, make some kind of gesture to compensate its students.

"No matter how much NYU insists to the contrary, it is simply not possible to provide a full performing arts education via Zoom," she said in a comment on change.org.

Some students have taken their grievances to court. In one complaint seen by AFP, Adelaide Dixon accuses the University of Miami of awarding her a diploma with a "diminished" value because of the nature of online and pass/fail courses.

She has sued the school for several million dollars, on behalf of about 100 students.

At least 50 US colleges and universities have been sued by students on similar grounds.

Universities have generally remained mum in public about court action.

But those who have spoken out insist they are caught in a difficult and unprecedented situation sparked by the pandemic.

While some have partially reimbursed students for room and board, given that many left campuses in mid-March, none have gone so far as to refund any tuition for the spring semester.

And the problems could get worse. What happens in the late summer or early fall when classes would usually resume? Will 20 million students return to American campuses?

In university circles, the debate is raging.

He says school officials promised to give him better guidance in the next 10 days, but admitted: "I'm preparing mentally to not go back."

It is somewhat hard to imagine how campus life could return to anything resembling normal as if the virus crisis did not happen.

"Dorms and cafeterias would have to be treated like grocery stores right now," with social distancing in effect and plenty of hand sanitizer, says Shah.

Pamella Oliver, the provost and vice president of academic affairs at California State University, Fullerton, told a virtual town hall: "We are assuming that in the fall, we will be virtual."

But for many schools, offering a virtual future means added pressure from students and their parents, who often are footing the bill, especially given the dire economic situation in the US.

"Many students and families will be earning less, and will have less available to spend on postsecondary education," Ted Mitchell, the president of the American Council on Education, said in a letter to Congress.

Mitchell predicts that enrollment for the next academic year will drop by 15 percent -- which translates into a revenue loss of $23 billion for the schools.

The stakes are high.

While the nation's top universities like Harvard, Yale, and Stanford have huge endowments and the ability to borrow at will, smaller schools could face bankruptcy if enrollment slips.