CULTURE 'Africa's Grammys' celebrate the hits of the continent

'Africa's Grammys' celebrate the hits of the continent 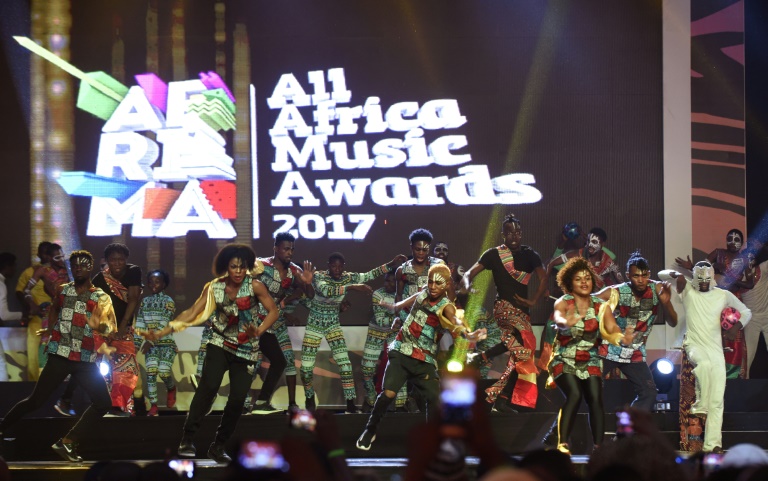 The annual All Africa Music Awards, better known as Afrima, is the African equivalent of the Grammys.(Photo: AFP)

After a 15-year career in banking and marketing, Nigerian Mike Dada was looking for a platform to "communicate the strength of Africa to the rest of the world".

He decided to set up Afrima -- the All Africa Music Awards -- Africa's equivalent of the Grammys, whose fourth edition takes place this weekend in Ghana's capital, Accra.

In 2014, penniless but passionate about music, he worked with private sponsors in Nigeria and a partner in Kenya.

Together, they organised the awards ceremony to "create jobs" and "make Africans proud", he told local media, earning the backing of the African Union.

In four years, Afrima has managed to carve out a space as a platform to showcase the bubbling, innovative and prolific African music industry that has exploded in the past decade.

In Accra, it's not World Music the continent is going to celebrate.

Instead, it's Afropop, the Nigerian-born style which mixes Congolese soukous, Ivorian coupe-decale, Ghanaian Highlife and Jamaican dancehall that has got Africa's youth dancing.

"Music is a bridge," said Olivier Laouchez, chief executive of Trace TV, a French music channel popular on the continent.

"In Senegal, we listen to Nigerian hits in nightclubs and South Africa's kwaito (afro-house) is exported to all radio stations on the continent.

"Today, what is bringing Africa together... is sport and music."

One category has been dedicated to artists from the vast diaspora.

This year, the contenders include Franco-Malian Aya Nakamura and the surprising Afrotronix, an artist of Chadian origin who dresses like Daft Punk and makes house music with Sahelian rhythms and lyrics in Spanish.

Maître Gims, who comes from Democratic Republic of Congo and is repeatedly played on French radio, has racked up more than 200 million views on YouTube with "J'me Tire" ("I'm outta here") and is Afrima's most nominated artist this year.

The rapper is as much of an unknown to English-speaking Africa as Nigeria's Davido is to French audiences, despite his 100 million-plus views on YouTube.

"Thanks to Afrima we get to know musicians from all over the continent," Oris Aigbokhaevbolo, a journalist with the Music in Africa website, told AFP.

Take, for example, Diamond Platnumz, a Tanzanian who hit the spotlight after winning three Afrima awards two years ago.

"Love you Die", his duet with Nigeria's Patoranking, is now being played around the world.

"Ghana has always been good (in terms of music) and countries like Sierra Leone or even Gambia are coming up," said Aigbokhaevbolo, who in 2015 was named the continent's best music journalist.

"It makes us feel that we are not the only country producing music on the continent", said the Nigerian.

Maître Gims from DR Congo is this year's most nominated artist at AFRIMA, the All Africa Music Awards

The big names are regular features from one year to the next: Nigeria's Davido, Wizkid and Tiwa Savage are fixtures, while South Africa's Cassper Nyovest and Nasty-C have made repeat appearances.

Today, they are virtually the only countries on the continent to have sophisticated music industries, with professional production facilities, agents and copyright lawyers.

Even though South Africa may have a more modern industry, Nigerian artists benefit from a local market of 190 million people, boosting audience numbers.

"We had to limit Nigerian songs for our new ranking show of African hits," Laouchez said.

"Otherwise they would have outshone the entire continent!"

Nigeria has been a clear leader of the Afropop revolution for 10 years.

But it remains to be seen if they will maintain their edge on Saturday night against a continent that wants to be finally heard.