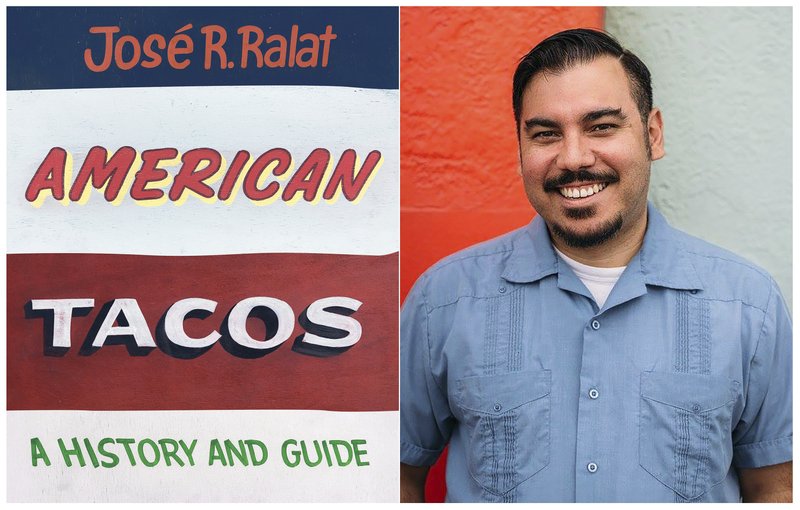 This combination photo shows "American Tacos: A History and Guide," left and a portrait of author José R. Ralat. The book illustrates Ralat's travels throughout the United States while he examines the global metamorphosis of a food that transcends borders, barriers, or bullets. (Photo: AP)

You can eat one with carne asada and corn tortillas in East Los Angeles, or one with flour and pit-grilled pork known as al pastor in Dallas. Travelers can pick a few up outside of Berlin’s Schonefeld Airport before boarding a flight, or grab one with albondigas and collard greens in Memphis, Tennessee.

In each place, you can taste the social and global evolution of the taco, according to José R. Ralat.

Some tacos incorporate the influence of Asian or Jewish cuisine. Others do their best to stay true to traditional taco orthodoxy — although no one can agree on what that is.

Ralat, the new Taco Editor at Texas Monthly (yes, that’s his title), has written a new book exploring how this simple dish with Mexican origins has spread and been transformed, from San Antonio to Tokyo, gaining fans and sparking some outrage among purists.

A lifelong project, “American Tacos: A History and Guide” (University of Texas Press) comes from Ralat’s travels throughout the United States and examines a dish that has come to transcend borders, barriers and bullets.

“No one owns the taco,” Ralat said in an interview with The Associated Press. “It’s a living food, and I wanted to see how it is changing as we change.”

Born in what is now Mexico, the taco is a creation of “the encounter” — the meeting of Spanish and indigenous peoples in the Americas. That meeting eventually led to the corn tortilla coming together with meats, beans and greens.

After the U.S-Mexico War of 1848, the United States grabbed nearly a third of Mexico’s northern territory, turning some ethnic Mexicans into Mexican Americans and creating a new southwestern border. The taco north of the line was now on its own, evolving for generations based on the available resources of its consumers.

That history is what fascinated Nuyorican-raised Ralat when he began to explore how demographic upheaval and mass migration have changed the taco. He found Indo-Mex, or Desi-Tex, tacos in Houston, with restaurants using aloo tikki, saag paneer and curries. In Oregon and Florida, he stumbled upon K-Mex tacos, which use Asian fusion to introduce Korean fried chicken or bigeye tuna sashimi.

Ralat found kosher tacos in Los Angeles and Brooklyn made with peppery barbecue brisket pastrami charred with green salsa. “Deli-Mex” is what some called it, Ralat writes.

But of course, Ralat found the heart of Mexican Americana holding true to and defending taco orthodoxy.

“San Antonio does its best to remain what it calls authentic,” Ralat said. “And one could argue, that’s also needed.”

How could one not enjoy fajitas in a thick flour tortilla with cilantro and onions? (However, some in New Mexico might call this a burrito). Still, what’s authentic to San Antonio might not be so to the people of El Centro, California, or even Tucson, Arizona.

On social media, taco fans debate. Ralat brushes that aside, however, as a sign of limited experience. “I always hear people say, ‘well, that’s not the way my grandmother made them’,” Ralat said. “You know what? Maybe your grandmother was a bad cook.”

Steven Alvarez, an English professor at St. John’s University in Queens, New York, and creator of a “Taco Literacy” course, said Ralat’s book comes as more Latinos are living across the U.S., from Massachusetts to Idaho. “To understand a people, you have to understand the food,” Alvarez said. “More people are coming together and so is the food.”

The food is a vehicle to make sense of new encounters. “If you are searching for the most authentic taco, you will soon find out it is a fruitless search,” Alvarez said. “You’ll never find it.”

Instead, you’ll discover that the taco has moved on, Ralat said.

Today, you can enjoy an English fusion taco in London’s Latino-dominated Elephant and Castle area while listening to UK soul singer Dayo Bello belt out a love ballad. You can enjoy tacos at the Pine Ridge Indian Reservation in South Dakota, where members of the Oglala Lakota Nation playfully tell visitors they are bringing the taco back to its indigenous roots. You can savor a Central American-influenced taco in East Boston with Brazilian immigrants.

“The taco is Mexico’s gift to the world,” Ralat said. “And the world is responding.”