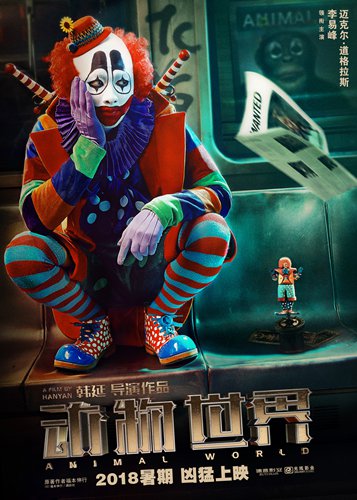 While recent Chinese adaptations of Japanese works have been getting the cold shoulder in China, Animal World - a film adaptation of Fukumoto Nobuyuki's gambling-themed manga Gambling Apocalypse Kaiji, which mixes imaginative clown-monster battles with a Hunger Games-type survival competition - is very likely to break this trend.

Hitting Chinese mainland theaters on Friday, the film had already raked in more than 30 million yuan ($4.5million) in presales and limited release screenings by Thursday. Its "want-to-see" votes on Chinese ticketing platform Maoyan stand at 187,000 votes, topping the nine other films set to be released the same day including the Sylvester Stallone-led Escape Plan 2: Hades, which has 142,000 votes.

The film is also set to premiere in Singapore and Thailand as well as kick off a limited release run in the UK and Ireland on Friday.

Retaining most of the plot of the original work, Animal World focuses on a story about gambling - a genre that mainland films rarely touch upon.

The film follows Zheng Kaisi (played by Li Yifeng), a troubled young man who is in debt to the tune of several million yuan. To pay off his debt, Zheng must survive a dangerous game set on a cruise ship along with other desperate debtors.

However, the term "gambling" is barely mentioned in the film and the deadly gambling game depicted in the original story is simply referred to as "a game" in the film - probably to ensure the film could pass China's censors.

Normally, illegal activities such as gambling are not allowed to be the main focus of Chinese mainland TV and film productions, and while imported works shown on online platforms used to be able to get around this restriction, the online content management ban implemented in June of 2017 caused these restrictions to extend to even them.

For example, gambling-themed Japanese anime Kakegurui - Compulsive Gambler was forced to change its title and later was taken off Chinese streaming site Youku after its fifth episode aired in July of 2017.

The film's English trailer on Youtube, which focused on the fast-paced and thrilling clown versus monster battles that take place in the main character's imagination in the movie, also sparked discussion among the platform's users, who dubbed the film as the "Chinese Deadpool" or "Deadpool plus It [the 2017 US horror movie about an evil demonic clown]."

"The clown in the film, on the one hand, represents Zheng's low self-esteem, mental trauma as well as his hidden potential; on the other hand, it also echoes Zheng's job as a an actual clown," the film's director Han Yan - known for his 2015 film Go Away Mr Tumor, China's Oscar pick that year - said at a Monday prescreening event in Beijing.

Discussing the film's name, Han said the reason he insisted on changing it to Animal World instead of using the original Japanese is that the film features characters struggling with their "animal instincts" and humanity and depicts a world that follows the law of the jungle.

"But I was deeply moved by the hero's choice at the end of the story when I first read the original, his persistence on standing by his morals even after he was betrayed several times. I made only a few changes to this part as it's kind of the core of the story," Han said.

Also, as the film involves lots of mathematics and game knowledge, the director also invited experts and professionals to act as the film's "logic counselors" while shooting to ensure that no cracks would creep into the story's logic, according to media reports.

Currently, Han and his team are already working on the sequel. However, since the following two stories in Gambling Apocalypse Kaiji are darker, "we might make some adjustments in the sequel but will, of course, first obtain permission from the original author," Han said at the event.