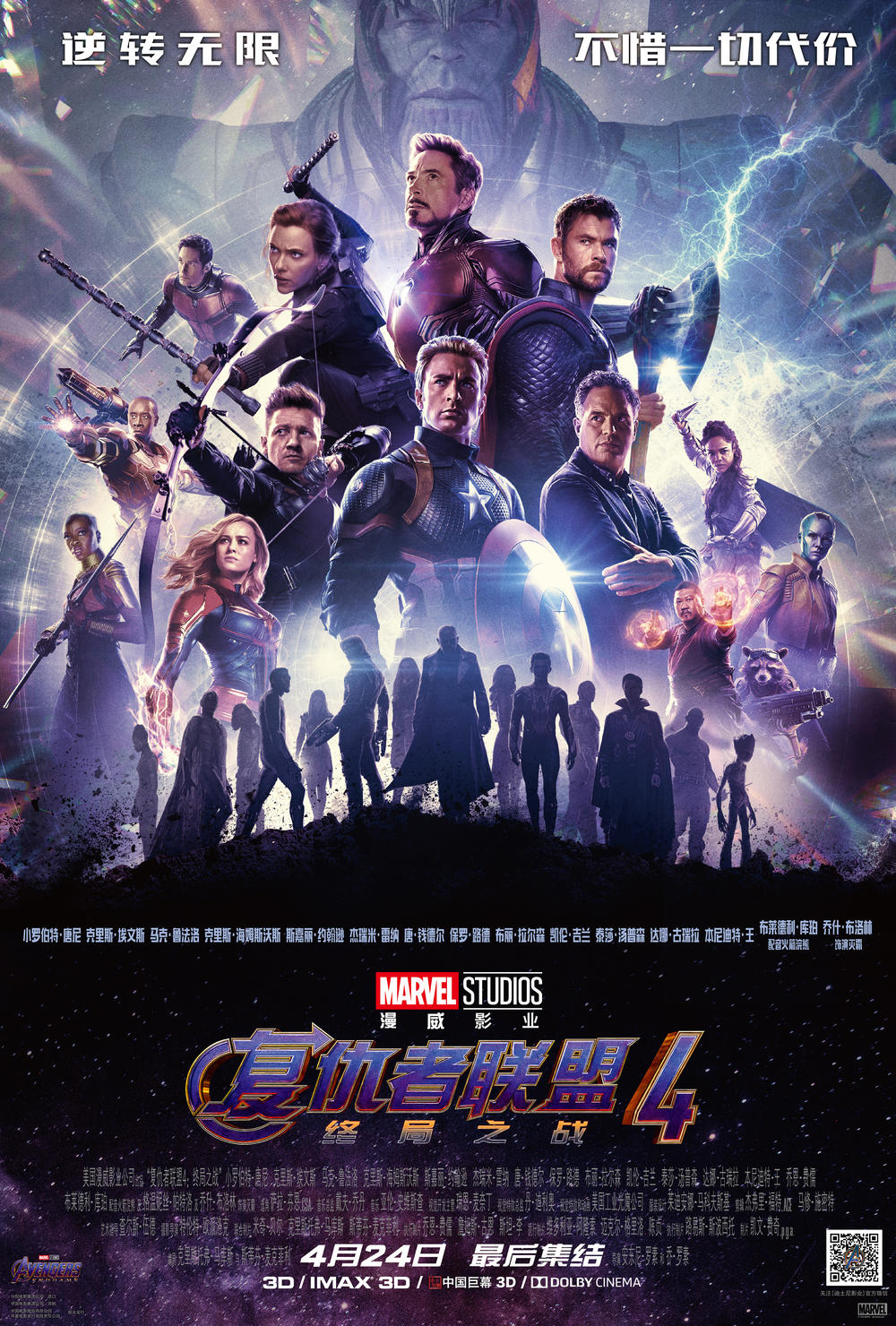 The film will open in China on April 24 and is one of the first markets to debut the most-anticipated finale of the "Infinity Saga," a phrase Marvel Studios President Kevin Feige coined for the first 22 films in the Marvel Cinematic Universe released over the past decade.

Pre-sales of tickets started at noon on April 12 and in just 10 hours, "Avengers: Endgame" became the fastest film to cross the 100-million-yuan (US$14.91 million) mark in pre-sales. The movie raked in a haul of 188 million yuan from all the current pre-sale dates within two days. This is more than the entire pre-sale revenues from other superhero blockbusters such as "Venom,""Avengers: Age of Ultron‎" and others, according to China's major ticketing and box office tracking app Maoyan.

The film also set another new record -ticket pre-sales worth so far 64.7 million yuan for early morning Sunday screenings. This has made it the "new king of midnight screenings," beating the previous record-holder "The Fate of the Furious" whose total sales for midnight tickets was 62.71 million yuan. It is worth noting that "Endgame" will eventually open on Wednesday, a normal working day, while "The Fate of the Furious" opened on Friday through the weekend.

Comparing to other films in its own franchise, "Infinity War" tickets went on sale 21 days and seven hours prior to its release, while "Endgame" just had 11 days and 12 hours of pre-sales. In its first three hours, "Endgame" overtook the first seven days of "Avengers: Infinity War" pre-sales. "Infinity War" pre-sold tickets worth more than 440 million yuan from all showing dates of its opening weekend since May 11, 2018, marking an all-time record. "Endgame" will approach the 200-million-yuan mark very soon on Sunday and still has 10 days to go to smash more records as more showing dates are released.

"Infinity War" now stands as the highest-grossing superhero film in China, with a box office income of 2.39 billion yuan, but its record will likely be surpassed by "Endgame," given current its pre-selling pace and sky-high enthusiasm.

It should be noted that "Infinity War" opened to 1.27 billion in China, two weeks after North America and after most countries in the international market. "Endgame" will open two days ahead of North America and many other markets this time, which is the best news for die-hard fans who desperately want to avoid hearing any spoilers."Endgame" will also have the four-day May Day national holiday film season, which starts on May 1, to profit from.

Its parent company Walt Disney Studios is not calling the event a premiere since there will be no film screening, but this is clearly a well-organized "compensation" for last year's fiasco fan event for "Infinity War." In that event, Chinese celebrities took the spotlight instead of Marvel stars, and fans were chaotically packed into the space a daybefore the event, causing huge security concerns and complaints.

But the first complaints about "Avengers: Endgame" were more about the unbelievably high ticket prices. Some cinemas have priced screenings at more than 300-400 yuan per ticket. To be fair though, most of these highly priced tickets are for IMAX screenings, which is said to be the best viewing experience for the film. This is due to its bigger screen which allows for 26 percent more picture in the frame compared to standard theaters. Wanda Cinema's app showed that a ticket costs 293 yuan for IMAX midnight screenings and all showing dates next day in one of their Beijing cinemas.

Box office analysts attribute the craze in raising ticket prices to different factors. First, the duration of the film, a full three hours, is way too long. This translates to fewer screenings in a day and potentially less ticket revenues for cinemas. Second, as early tickets are snapped up, some cinemas are just greedy and hoping to profit from die-hard fans. Many showings sold out at record time and many cinemas scrambled to even add screenings at 3:00 a.m. on the opening day. Third, China has more screens than any other markets in the world, but the movie business has become tougher this year as more and more audiences are choosing not to go to cinemas. "Endgame" could be a golden goose for them.

"Ticket prices can be staggered. For example, it is reasonable to satisfy those who have the ability to pay and want to watch the first screening," Gao Jun, a senior veteran in film business, told the National Business Daily. He said he believes that it is very important to protect audiences' viewing habits and give them what they want as the loss of viewers caused by prices is difficult to recover.

"The ticket price is a double-edged sword. It is not advisable to hike the price up too high, otherwise the damage to the market is permanent," Gao said, pointing that a 20-30 percent increase in ticket prices is reasonable and acceptable.

How big "Avengers: Endgame" will end up remains to be seen, but its global box office income, which will include China's contribution, will likely go beyond US$800 million, Deadline.com predicted.