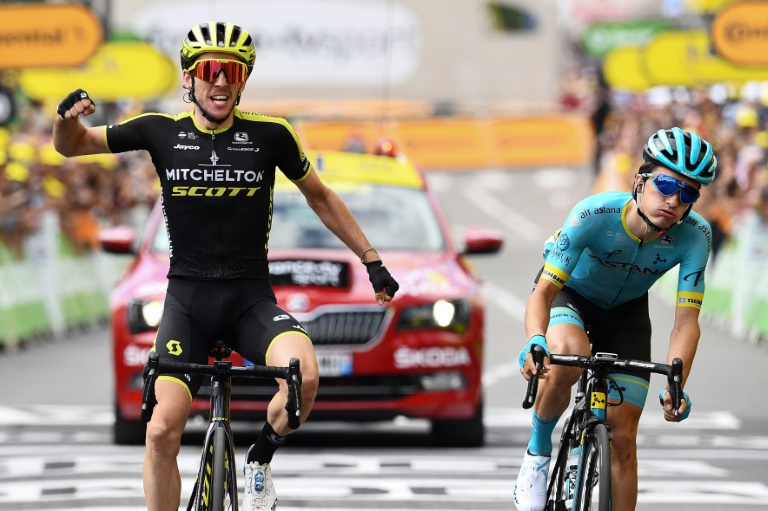 Britain's Simon Yates won stage 12 of the Tour de France on Thursday, beating two other survivors of a mass breakaway in the Pyrenees.

Simon, twin brother of Mitchelton Scott captain Adam Yates, is the Vuelta a Espana champion. He also led the Giro d'Italia earlier in 2018 before a meltdown under pressure from eventual champion Chris Froome.

"I'm here to help Adam, he's doing well and is ready," he said of his twin who is seventh in the overall and a potential Tour winner.

"But I'm really happy with this win, I got the green light to go from the team and timed it well.

"But now it's back to the day job," he smiled. Brother Adam is just 31sec adrift of Thomas in the overall standings.

"I'm here to help Adam get the best result."

The brothers come from Bury in Lancashire, where ex-England football internationals Gary and Phil Neville grew up.

Simon Yates is over an hour adrift in the overall standings, but punched the air in joy after outwitting his rivals to add this Tour de France stage to victories in the Vuelta and Giro.

Yates came over the final climb with Bora's Gregor Muehlberger and Astana man Pello Bilbao, but launched a long range sprint for the line to win by a clear bike length.

Cameras on the distant peloton showed Adam Yates, connected by radio to his team car, smiling.

Overall leader Alaphilippe led the peloton south from the pink-bricked city of Toulouse Thursday morning vowing to hold on to the yellow jersey, but faced little pressure on the day.

The two major obstacles on the road to the rural outpost of Bagneres-de-Bigorre were Tour classic: the 13.2km ascent of the Col de Peyresourde at an average of 7 percent followed by a steeper climb to Hourquette d'Ancizan. The day finished with a downhill charge to the finish line.

The small, sleepy finish-line town surrounded by mist-capped Pyrenean peaks had been flooded with enthusiasts, who packed the final 3km of the route making for a raucous finale.

Thomas, a double Olympic and triple world champion on the track, traditionally does well in the time-trial, the next major test on Friday.

Another French hope Thibaut Pinot has promised to attack on Saturday's next mountain stage, but is for now thinking about Friday's 27.2km individual time-trial around Pau.

"Everyone was thinking about the time-trial today," said Pinot. "You make major gains or losses against the clock."

The 83-year-old Raymond Poulidor, who finished on the Tour podium eight times without winning and is beloved by the French, thought Thomas would do well.

"Geraint will put time into all his key rivals on the time trial," Poulidor told AFP.

Alaphilippe has again vowed to defend his overall lead at Pau.

"I have a lead of 1min 12sec, and I'm really looking forwards to pushing myself to a new limit," said the 27-year-old soldier, who Thomas has described as 'the darling of France'.

Third placed Egan Bernal appears to be the darling of Colombia as increasing numbers of reporters from the South American nation arrive in anticipation of the 22-year-old pulling off something special.

"Time-trials aren't my thing," said the Ineos co-captain. "I see Geraint taking some time off the other guys, but I'll lose a bit."