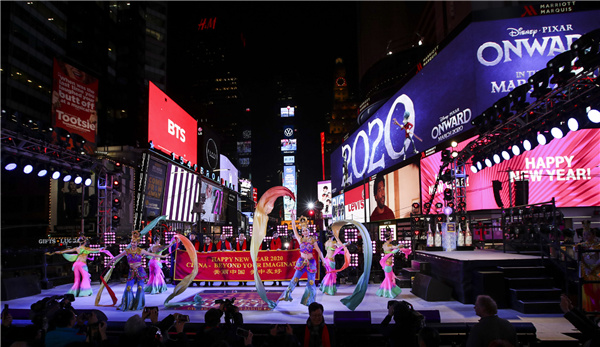 Traditional Chinese culture was presented to hundreds of millions of viewers around the world. Chinese Consul General Huang Ping was on hand to deliver a speech. New York Mayor Special Representative Rohan O'Narion and other US-China political, business, and cultural representatives were also in attendance.

The celebration’s theme was "Beautiful China: US-China Friendship." From the perspectives of culture, art, history, and natural landscapes, it presented various features of contemporary China.

On the same day, major media and networks in China and the US, and voer 200 commercial radio and television stations worldwide broadcast the event.

Data provided by Trylon SMR revealed the event was watched by more than 200 million Americans and over 1 billion international viewers.

Zhang Jinping, President of the US-China Friendship Association, said that ever since December 31, 2011, when the Times Square New Year’s Countdown Celebration committee first invited Beijing to participate, the countdown event has grown to become the largest cultural tourism platform.