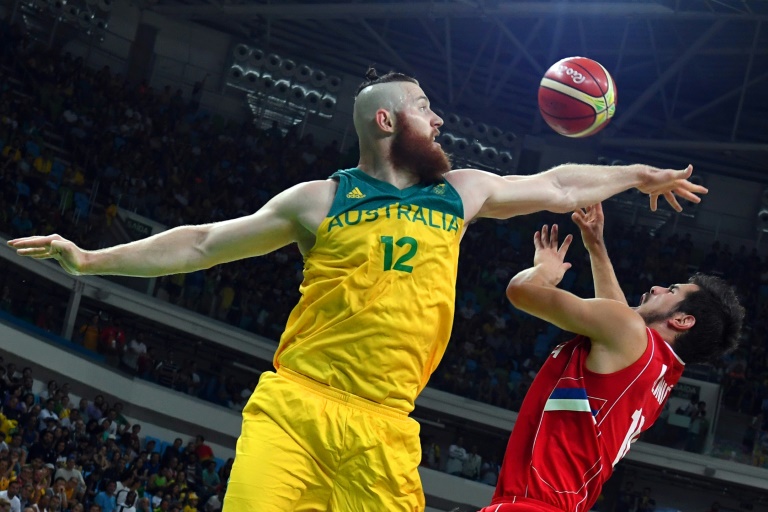 Forward Aron Baynes (L) is one of a number of NBA players on Australia's team for the Basketball World Cup. (Photo: AFP)

Australia take a slew of NBA standouts to the World Cup as they look to finish on the podium for the first time, confident of finally forcing a breakthrough after a shock win over the USA.

The Asian and Commonwealth champions will need to step up significantly, having never gone beyond the quarter-finals in 11 previous World Cup appearances.

But they head to China on a roll after ending the USA's run of 78 consecutive wins in major competitions and exhibition games in a warm-up match last weekend.

"It's part of the process that we don't get too high on the highs and too low on the lows," coach Andrej Lemanis said, tempering expectations after the Boomers' first-ever victory against the world and Olympic champions.

But the 98-94 victory bodes well for Australia, who have a core of top-notch players including Utah Jazz's Joe Ingles, Patty Mills of the San Antonio Spurs and seasoned veteran Andrew Bogut, fresh from a stint with Golden State Warriors.

Add the Cleveland Cavaliers' Matthew Dellavedova and Phoenix Suns centre Aron Baynes and it is a strong line-up, even if Australia are missing Philadelphia 76er Jonah Bolden and his NBA teammate Ben Simmons, who recently signed a five-year, US$170 million contract extension.

Lemanis said the squad was free from ego, boasting "a tremendous depth of talent".

"This is a focused and united team," he said. "We play the right way, we play for each other, and we play for the name on the front of the singlet (the country) rather than the back.

"We haven't medalled yet at an international event in the men's game so there's certainly a mission to get that done."

Veteran United States coach Gregg Popovich is wary of the threat the Boomers pose, particularly after his young team was upset in Melbourne.

"They've been close for several years and they are hungry," he said. "I think they are one of the top contenders, without a doubt."

The 1990s were a golden era for Australian basketball with trailblazers including Andrew Gaze (Washington Bullets/San Antonio Spurs), Mark Bradtke (76ers) and Luc Longley, who won three championships with the Chicago Bulls alongside Michael Jordan.

While Australia's National Basketball League (NBL) struggled after the turn of the century as attendances dwindled, grassroots participation remained strong and helped bring a new generation of talent to the fore.

Their emergence has coincided with a surge in the sport's popularity in Australia with record crowds -- more than 103,000 watched two World Cup warm-up games against the USA -- and growing TV ratings.

This has been reflected in a new broadcast deal that ensured the entire 2019-2020 NBL season will be shown on free-to-air television.

NBL owner Larry Kestelman said the agreement, with domestic network SBS and global broadcaster ESPN, was "a huge leap forward" and would help basketball maintain its rise in Australia, as well as bring more global credibility.

The Boomers' run to the 2016 Olympic semi-finals helped boost their profile and San Antonio's Mills believes they have enough in their arsenal to not only win gold in China but mirror the feat at the 2020 Tokyo Olympics.

"We're excited to put together Australia's best ever team," he said recently.

"We want to be the best team in the world and are absolutely licking our chops at that opportunity."

They will be put to the test at the World Cup with Canada, Lithuania and Senegal also in what is widely considered the competition's 'Group of Death'.

Veteran centre Bogut, a key cog for Australia off the bench, called the team "a special group of guys".

"They're proud to put on that jersey, our coaches have instilled a very good culture," he said.

"I think we've got a group that we feel like we can beat anybody in the world."