CULTURE 'Bio art' show offers a walk on the wild side

'Bio art' show offers a walk on the wild side 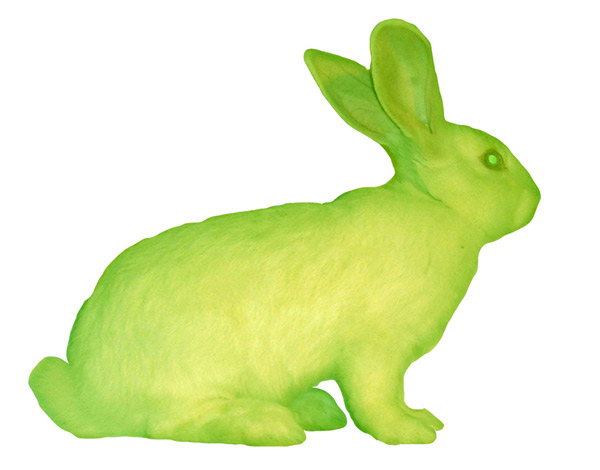 A photo of an artwork on show at Beijing's 798 Art Zone, GFP Bunny, a transgenic artwork featuring a green fluorescent rabbit. (Photo provided to China Daily)

Glowing bunny rabbits, meat-based meals grown in petri dishes and swarms of insects are all featured in an ongoing exhibition of "bio art" being held at Beijing's 798 Art Zone.

The exhibition, Quasi-Nature: Bio Art, Borderline and Laboratory, curated by Wei Ying from the Central Academy of Fine Arts, looks at the complex relationship between humans and nature, and examines how far technology can be pushed before it raises moral and ethical challenges for society.

Wei spent six years studying biological art and developing relationships with 11 artists in the field around the world. She then spent three months assembling the collection, where many of the works are making their debut in China.

For example, the photo of the GFP Bunny, a transgenic artwork featuring a green fluorescent rabbit created in 2000, is on show. The artist, who cooperated with a scientist, combined jellyfish and rabbit DNA to produce a bunny that glows bright green under blue light. GFP stands for green fluorescent protein.

In the image taken from the artwork Nature?, the artist Marta de Menezes created live butterflies with their wing patterns modified for artistic purposes in 1999.

In the 2000s, works like these sparked fierce controversy in the West because they raised the question of whether humankind had replaced God as the role of the creator in life, says Wei. Eduardo Kac, the artist behind the glowing bunny, said he was depressed by criticism he faced at that time. 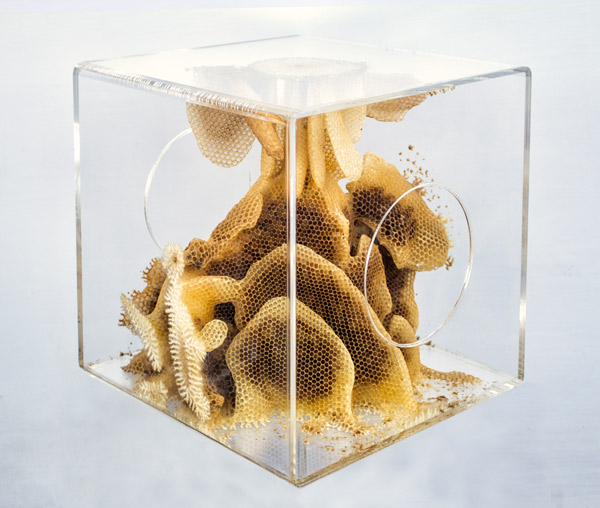 "Kac told me this GFP technology is commonly used in biological experiments and doesn't do harm to the rabbits. He said it would take time for the public to understand and accept it."

Although GFP technology was used in the laboratory many times previously, this was the first time that the public had seen this kind of art. It presents the results of gene-editing in a concrete and visual way, which forces people to discuss the pros and cons of the technology.

In the photo based on the installation Disembodied Cuisine, the artists Oron Catts and Ionat Zurr created a semi-live frog "steak" grown from cells of the biopsy of a live animal and proliferated in vitro in a show in 2000. The skeletal frog muscle was grown over biopolymer alongside live, healthy frogs in the installation. On the last day of the show, the meat was cooked and eaten, and the live frogs were released back into the wild.

This concept of "victimless cooking" aims to highlight societal resistance to eating different animals and mocks the rise of artificial foods.

The work All the Insects in the House by Zhao Renhui displays 108 insects gathered from the artists' home.

"These creatures coexist with people, but they largely go unnoticed," Wei says. "I aim to discuss the relationship between humans and nature, and overturn the arrogant assumption that man is the only master of the planet."

In the artwork Yuansu II, a queen bee was put in the middle of a box, while the other bees started building honeycomb around her. Every seven days, the artist Ren Ri would randomly change the position of the box by rolling a dice, which in turn altered the shape of the sculpture.

"The final shape was created by humans, bees and the laws of probability," she says. "It conveys the idea that each species should be respected and not treated as workers for mankind."

Wei is one of two winners of the Hyundai Blue Prize 2018, a global award for leading young curators, organized by the auto giant. Wei says her exhibition, which takes place at the Hyundai Motorstudio Beijing art space and runs through June 16, examines the future of human and nonhuman society and nature from a global perspective.

All the works on display employ laboratory material, technology or organisms in their artistic creations.

"The point is not to show off technology, or to judge what is right or wrong, but to touch the audience and make them think," says Wei.

Qiu Zhijie, a professor from the Central Academy of Fine Arts and a jury member, says the show will appeal to newcomers and industry insiders alike, thanks to its blend of cutting-edge artworks.

"The concept of biological art is new to the public, so we want to try and popularize it," he says.

This year's competition will focus on the topic of "social intelligence", where six jury members will choose six finalists by reviewing their articles, plans and exhibition proposals.

All six finalists will get the chance to join a three-month mentorship program with one of the jury members, while the final two winners will each receive 600,000 yuan ($89,438) to stage their own award exhibitions in Beijing.