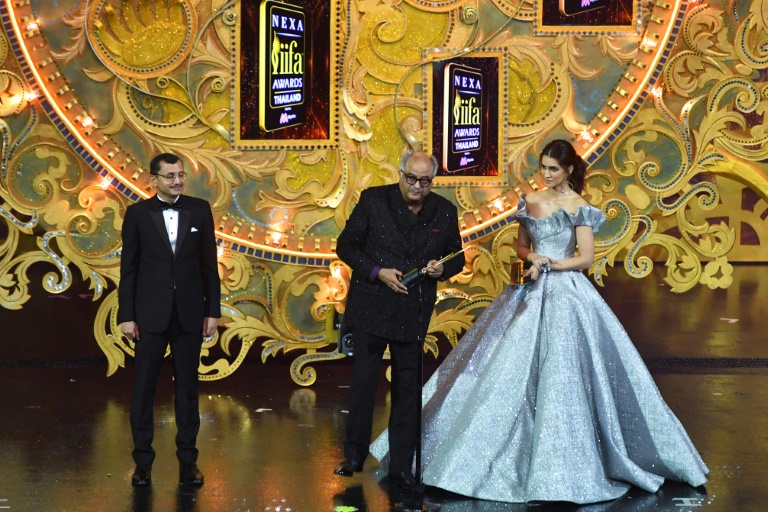 Bollywood superstar Sridevi Kapoor was honoured for her final role at India's movie awards in Bangkok, winning best actress at the celebration of dance, music and film just months after her shock death.

Sridevi was considered one of the most influential Bollywood actresses of all time. Her death from accidental drowning in a Dubai hotel room bathtub aged 54 in February left the nation in stunned grief.

"I have mixed emotions today. I miss her every minute and second of my life," her widower Boney Kapoor said as he collected the gong on her behalf at the Indian Film Academy's (IIFA) annual awards ceremony.

"I still feel she is around... I want you all to support Janhvi like you supported her mother," the Bollywood producer said in an emotional speech quoted by Indian media, referring to the eldest of Sridevi's two daughters who is set to make her Bollywood debut.

With an audience of more than 850 million, the IIFA Awards -- dubbed Bollywood's Oscars by some in the industry -- is India's biggest media event.

It is also one of the world's most-watched annual entertainment shows, held outside India to demonstrate Bollywood's global appeal.

Sridevi "was the queen of grace and worthy of every praise", read a message from the IIFA's Twitter account.

But it was given an additional tinge of sadness as best actor went to Irrfan Khan, known internationally for his roles in blockbusters "Life of Pi" and "Slumdog Millionaire", in his absence.

Earlier this year the Indian actor, who was also in the 2016 film "Inferno" alongside Tom Hanks and is one of Bollywood's most globally recognised exports, revealed he has a rare tumour and is being treated in London.

Khan bagged the award for his role in "Hindi Medium", a film highly critical of India's class divide in which he plays a father trying to get his daughter into a prestigious school.

The subject of Sridevi's last film "Mom" also touched a sensitive topic in India -- that of rape, with the actress portraying a mother seeking to avenge a sex attack on her stepdaughter.

The event saw veteran actor Anupam Kher honoured with the "IIFA Award for Outstanding Achievement in Indian Cinema". The Indian star is known abroad for his roles in "Bend It Like Beckham" and "Silver Linings Playbook".

The ceremony saw veteran actress Rekha, 63, roll back the years as she belted out vintage hits in a rare public performance, as well as routines from the likes of Ranbir Kapoor and Kriti Sanon.

Organisers opted for a green carpet instead of red to raise awareness of environmental issues and it was graced by stars like Varun Dhawan, Konkona Sen Sharma, Nawazuddin Siddiqui and Arjun Kapoor.

However the National Film Awards, established in 1954, are still considered India's most prestigious film awards ceremony.

IIFA will be broadcast worldwide on television on July 29.

"The fact that we are 1.2 billion people in India helps" boost the audience, said Sabbas Joseph, the event's organiser, adding that viewing figures are also strong in the Middle East and in countries with large Indian communities.