CULTURE 'Chef of the century' Joel Robuchon dies at 73

'Chef of the century' Joel Robuchon dies at 73

Joel Robuchon, the world's most-starred Michelin chef who tore down kitchen walls to give diners new insights into the art of cooking, died on Monday at 73. 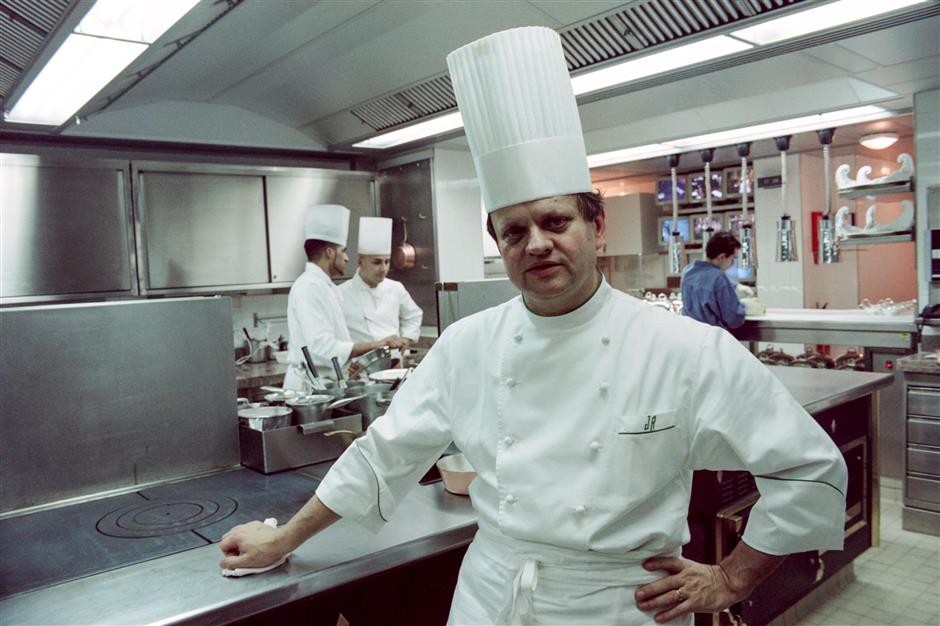 In this file picture taken on January 4, 1994 in Paris, French chef Joel Robuchon poses in his new restaurant on the eve of the opening. (Photos: AFP)

Robuchon, who was hailed as one of four "chefs of the century" by the Gault & Millau industry bible in 1990, founded a string of restaurants that revolutionised fine dining across three continents, at one point ratcheting up a record 32 Michelin stars.

He still had 24 stars at the time of his death, with foodies lining up from Tokyo to Paris and Macau for seats in his L'Atelier restaurants, where they can watch chefs in action, perched on high stools at a U-shaped bar.

"His name and his style embodied French cuisine around the world, symbolising an art of living and the insistence on work well done, and expressing the richness of our traditions," President Emmanuel Macron said in a statement.

Robuchon died of pancreatic cancer in Geneva, where he was planning to open a restaurant, his friend, food critic Gilles Pudlowski confirmed to AFP.

His death was also confirmed by a French government spokesman.

Macron lauded his role in the emergence of nouvelle cuisine, which did away with heavy sauces in favour of ultra-fresh vegetables and intricately crafted dishes.

British chef Gordon Ramsay, who trained under Robuchon, tweeted that he "kept all of us on our toes! Even when we were sleeping!

"He was among the first, just after Paul Bocuse, who was able to have an international footprint," he said.

Born in 1945 in the central city of Poitiers to a bricklayer father and stay-at-home mother, Robuchon's first vocation was the priesthood.

But while cooking alongside nuns for other seminarians he discovered a passion for food and at 15 entered the restaurant trade.

A perfectionist from the start, he quickly earned a name for himself and by the age of 30 was running a 90-strong kitchen at the Concorde Lafayette hotel in Paris.

He was among the first top chefs to work closely with big food companies, starting as an adviser to the French group Fleury Michon in 1987.

His picture soon began gracing a line of signature ready-to-eat dishes, while giving tips on "Eating Better", the Fleury-Michon slogan.

But by the age of 51 he had worked himself to the bone.

Declaring he did not want to die of the stress of turning out flawless fare day after day, the father of two announced his retirement in 1996.

"I will watch my children and my grandchildren grow up, I will love my wife, my friends and the good things in life," he told Le Figaro.

'Cooking Through the Seasons'

He soon became a fixture on French television, hosting a series of popular cooking shows that aimed to demystify haute cuisine for the masses.

The most popular was "Bon Appetit Bien Sur," a daily 20-minute programme which ran from 2000 to 2009 and often included appearances by other top chefs.

His campaign to encourage better everyday eating also included writing nearly 20 books, including "Cooking Through the Seasons" and one dedicated to potatoes.

By 2003 he was back in the kitchen with the Atelier concept, which he debuted in Paris and Tokyo and later took to London, Las Vegas and New York, among other cities.

Inspired by sushi counters – Robuchon was passionate about Japan – and tapas bars, he intended the restaurants to be more relaxed and accessible than traditional three-star eateries.

"Times have changed, consumers are looking for cuisine that is less sophisticated, a place with ambiance where you eat well," he said.

Despite his placid demeanour he had a short fuse.

In a June 2013 interview with The Telegraph newspaper he admitted to throwing a plate at Ramsay, who himself is famous for his mercurial nature.

"I've never thought of myself as having that much of a temper. But it's true that I can't stand it when things are not done properly. When that happens, I cannot control my reaction," he said.