CULTURE 'Coco' guitars all the rage in Mexico

'Coco' guitars all the rage in Mexico 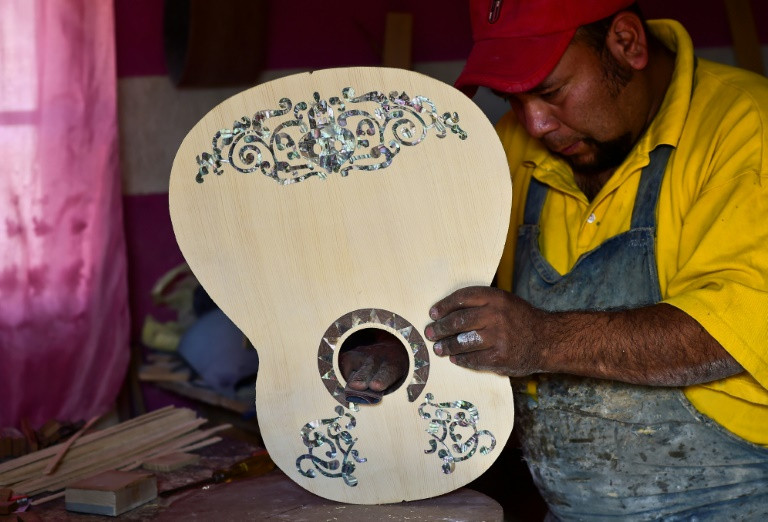 Salvador Meza has been making guitars since he was a boy, but his leathery hands have never had to churn them out as fast as now -- thanks to the hit movie "Coco."

Meza, 41, is one of many renowned guitar-makers in the Mexican town of Paracho, which has been producing artfully crafted guitars since the 18th century.

But the sleepy colonial town has never seen a boom like this -- all because of "Coco," this year's Golden Globe winner for best animated film and a box office smash that has grossed more than $500 million so far.

Set in Mexico, the movie tells the story of Miguel, a young boy who secretly longs to be a musician but is growing up in a family where music is forbidden.

Fate thrusts into his hands a white guitar incrusted with mother-of-pearl, topped with gold tuning pegs and a stylized black skull.

The skull, like the film itself, is a playful tribute to Mexico's Day of the Dead, a festival of colorful costumes, decorations and sweets during which, according to tradition, the dead come back to visit the living.

Director Lee Unkrich has called the film a "love letter to Mexico," and Mexico loves it back: it is the country's highest-grossing movie of all time.

The animators at Pixar, the studio behind the film, based Miguel's guitar on a real-life version made by an artisan from Paracho -- and demand for replicas now has the town's luthiers working in overdrive.

"I usually work out of my home with my wife and a friend. But now, I've had to call up my godmother, my nephew, my cousin," said Meza through the cloud of sawdust in his workshop.

Since "Coco" had its world premiere in Mexico on October 20, Meza says he has been sleeping three hours a night and has doubled his output from 50 guitars a week to 100.

Paracho, the "guitar capital of Mexico," makes nearly one million classical guitars a year, many exported to the United States.

Typically, they are elegant and understated masterpieces of burnished brown wood.

At least, that was the case until the town caught what guitar shop owner Maria Eugenia Gomez calls "Coco fever."

Now, she says, she can't keep up with demand for the flashy white guitars.

The man behind the original "Coco" guitar is German Vazquez, a Paracho native who emigrated to the United States 25 years ago, slipping over the border to chase the American dream.

The state where Paracho is located, Michoacan, was until recent years swept by grisly violence unleashed by the Knights Templar drug cartel. It is among the states with the highest rates of emigration to the US.

After Vazquez crossed the border, he found work, eventually became a US citizen and finally managed to open his own guitar workshop in Los Angeles -- which is where Pixar found him.

Now 64, he reminisces with a hint of nostalgia about his trek across the desert a quarter-century ago.

"It was hard. You arrive with nothing but the clothes on your back, with no money, nothing but your desire to work," said Vazquez, a critic of US President Donald Trump's planned border wall.

He said he sees a little bit of young Miguel in his own life's story.

"He wants to be a musician, and he searches for a way to make it happen. He fights and fights until he achieves it. I think in that way I'm also like little Miguel... in love with guitars," he told AFP.

"My life is straight out of a movie."