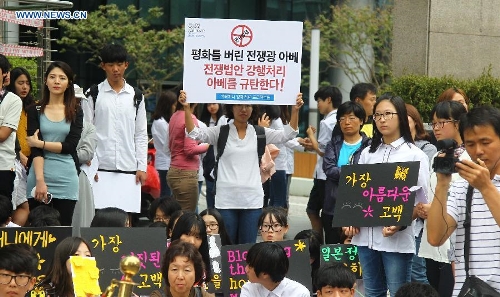 A film festival in suburban Tokyo will show a documentary on the highly controversial issue of Japan's wartime military brothels, organizers said on Sunday after coming under fire for dropping the movie.

The film's screening was canceled last week after concerns over the safety of volunteers and objections from local officials.

But the decision was reversed after "lots of voices offering cooperation to address our safety concerns," a member of the organizing committee told AFP, who said the festival would increase the number of volunteers to boost security.

The controversy over the film comes after an exhibit in central Japan was shut down for two months earlier this year after it received threats for displaying a statue of a wartime sex slave, and with relations between Japan and South Korea badly frayed over wartime issues.

The documentary "Shusenjo: The Main Battleground of The Comfort Women Issue" examines the debate over so-called "comfort women," who were forced to work in military brothels during World War II.

Mainstream historians say up to 200,000 women - mostly from Korea, but also other parts of Asia including China - were forced to work in the brothels.

But some nationalists insist the women were prostitutes, claiming there is no documented evidence that the Japanese military was ordered to recruit women against their will. Kawasaki City on Tokyo's outskirts reportedly expressed concerns.