'Comfort Women' film screened in US 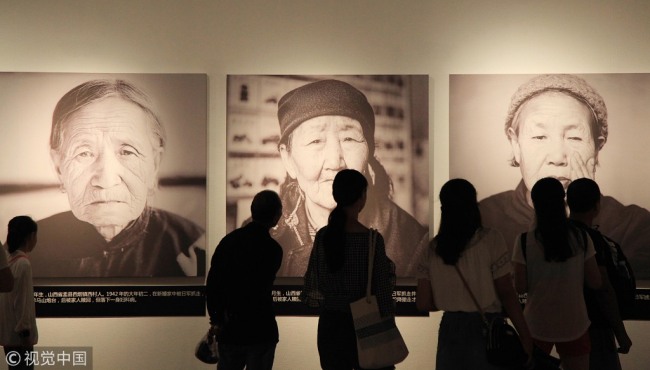 A documentary featuring the plight of China's comfort women during WWII was screened in Washington D.C. on Saturday, days before the 87th anniversary of the Sept. 18 Incident which marked the outbreak of Japan's large-scale invasion of China.

Around 300 people, most of them Asians, watched the film titled "Twenty Two" at the Avalon Theatre in northwestern D.C. It was free and open to the public, sponsored by a number of local Chinese American organizations to remember the Sept. 18 Incident anniversary.

The so-called phrase of comfort women is a euphemism for girls and women forced into sexual slavery by the Japanese military during World War II. More than half of the 22 women featured in the documentary have reportedly passed away since 2014.

"Justice and dignity should be attained for them," Chen said.

Some 400,000 women across Asia were forced to be comfort women for the Japanese army during WWII, nearly half of them Chinese, according to the Research Center for Comfort Women at Shanghai Normal University.

Old age is now taking the lives of many comfort women, and only 14 comfort women were still alive on China's mainland areas, a Xinhua report said in July, quoting the research center.

"For viewers unfamiliar with the topic, 'Twenty Two' provides the basic facts about the estimated 200,000 women enslaved in Japanese-occupied China," Mark Jenkins wrote in a review published by the Washington Post last year after its debut, noting the film took "a quiet, deliberate approach that must be partly out of respect for the women and their suffering".

The documentary, crowd-funded by 32,099 people, was an unexpected hit with box office revenue exceeding 139 million yuan (20.8 million U.S. dollars) within nine days after debut in China last year, once grabbing the attention of the whole nation.

On Sept. 18, 1931, the Japanese Kwantung Army stationed in northeast China destroyed a section of the railway near Liutiaohu and then falsely accused the Chinese military of causing the explosion. Using this as a pretext, the Japanese then bombarded Shenyang and began invasion of northeast China.