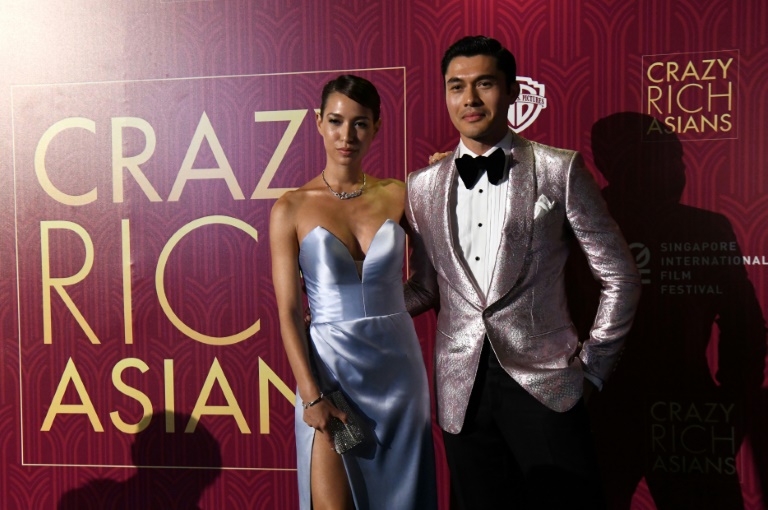 Actor Henry Golding and his wife Liv Lo pose at the premiere in Singapore of 'Crazy Rich Asians,' which led the North American box office for a third straight weekend. (Photo: AFP)

It has been another crazy good weekend for rom-com "Crazy Rich Asians," which topped the box office for a third straight weekend amid a pretty good summer for North American theaters overall, industry watchers said Sunday.

The adaptation of Kevin Kwan's best-selling novel, starring Michelle Yeoh, Henry Golding and Constance Wu, follows an American economics professor as she meets her super-rich boyfriend's family in Singapore in a story about the clash of love, family and great wealth.

"Crazy Rich" also helped boost the summer box office to what Hollywood Reporter called a "spectacular year-over-year recovery," with domestic revenue expected to be up 14 percent over last summer.

Warner Bros. meanwhile scored another hit with shark-thriller "The Meg," in the No. 2 spot again with takings of $10.5 million. Jason Statham stars as a rescue diver trying to save scientists trapped in a submarine being attacked by a huge, prehistoric shark.

In third spot was Tom Cruise adventure film "Mission Impossible -- Fallout" from Paramount, which took in $7 million. Globally, the action blockbuster has earned $649 million, the best performance of any of the "MI" films to date.

And in fifth was "Searching" from Sony, at $5.7 million. Written and directed by filmmaker Aneesh Chaganty, it tells the story of a Korean-American man's desperate effort to find his teenage daughter after she goes missing in California. It stars John Cho, Michelle La and Debra Messing.

Rounding out this weekend's top 10 were: