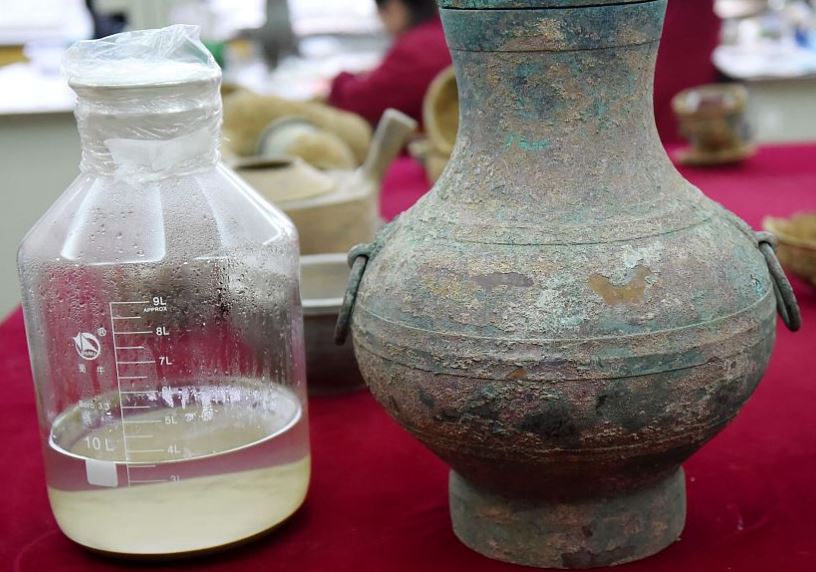 The liquid found in a bronze pot unearthed from the Western Han Dynasty tomb is an "elixir of life" recorded in ancient Taoist literature, November 5, 2018. (Photo: VCG)

Archaeologists in Central China's Henan Province said Friday that the liquid found in a bronze pot unearthed from a Western Han Dynasty (202 BC-8 AD) tomb is an "elixir of life" recorded in ancient Taoist literature.

About 3.5 liters of the liquid was excavated from the tomb of a noble family in the city of Luoyang last October. It was initially judged by archaeologists to be liquor as it gave off an alcohol aroma.

However, further lab research found that the liquid is mainly made up of potassium nitrate and alunite, the main ingredients of an immortality medicine mentioned in an ancient Taoist text, according to Pan Fusheng, leading archaeologist of the excavation project.

"It is the first time that mythical 'immortality medicines' have been found in China," said Shi Jiazhen, head of the Institute of Cultural Relics and Archaeology in Luoyang.

"The liquid is of significant value for the study of ancient Chinese thoughts on achieving immortality and the evolution of Chinese civilization," Shi added.

A large number of color-painted clay pots, jadeware and bronze artifacts were also unearthed from the tomb, which covers 210 square meters. The remains of the tomb occupant have also been preserved.

"The tomb provides valuable material for study of the life of Western Han nobles as well as the funeral rituals and customs of the period," Pan said.