CULTURE `Eurydice’ heads to LA Opera and then the Met

`Eurydice’ heads to LA Opera and then the Met 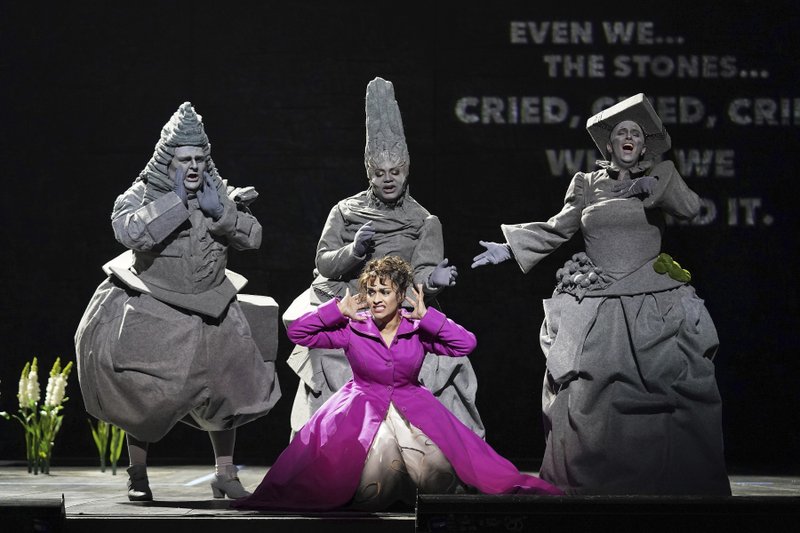 This Jan. 25, 2020 photo released by the LA Opera shows Danielle de Niese, foreground center, with Kevin Ray, background from left, Raehann Bryce-Davis and Stacey Tappan as the Three Stone during a dress rehearsal of "Eurydice," at the Dorothy Chandler Pavilion in Los Angeles. (Photo: AP)

More than 70 composers from Monteverdi to Glass have written operas inspired by the myth of Orpheus and Eurydice, but that didn’t deter Matthew Aucoin from adding his name to the list.

“I think musicians love the idea that music can bring people back from the dead,” Aucoin said.

The 29-year-old composer’s “Eurydice” will have its world premiere at the Los Angeles Opera in February and then move to the Metropolitan Opera in the fall of 2021. The libretto by Sarah Ruhl is adapted from her play of the same name, which recasts the story of the musician’s descent to the underworld by focusing on his wife.

Aucoin first explored the subject in a 2014 piece for countertenor, violin and orchestra called “The Orphic Moment.” He described that work as “a 17-minute explosion … kind of an expansion of the few milliseconds before Orpheus turns round” and thus loses his chance to bring Eurydice back to life.

“It’s a very dark take on what’s in his mind,” Aucoin said in a joint interview with Ruhl following a rehearsal last month. “But I was so energized by writing the piece that I knew I wanted to return to it.”

Aucoin has a dizzying resume for one so young: A graduate of Harvard University and The Juilliard School, he has served as an assistant conductor at the Met, as an apprentice to Riccardo Muti at the Chicago Symphony and is currently the first-ever artist in residence at the Los Angeles Opera.

When the Met commissioned him to write an opera as part of the company’s new works initiative with Lincoln Center Theater, he began searching for the right project. Both his sister and Andre Bishop, artistic director of LCT, recommended Ruhl’s play, and Aucoin said: “I read it. And wept. And gave her a call.”

Ruhl, who has a long list of plays to her credit but had never worked on an opera, noted that when they began their collaboration, Aucoin was 25, the same age she had been when she wrote “Eurydice.”

“The genius and bravery of youth are undaunted,” she said. “It’s a good moment to start a crazily ambitious project because you just plunge in feet first.”

Crazily ambitious or not, the result won an enthusiastic thumbs-up from Peter Gelb, the Met’s general manager, when he heard it at a piano workshop in 2018.

“I thought it was fabulous,” Gelb said in an interview. “Matt is an original voice whose writing music that is moving and beautiful.”

Christopher Koelsch, president and CEO of the Los Angeles Opera, which signed on as co-commissioner early in the opera’s development, was already a fan of Aucoin’s because of his first opera, “Crossing,” based on diaries kept by the poet Walt Whitman while he tended to wounded Civil War soldiers.

With “Eurydice,” he said, “the part that came as a surprise to me and delight was a level of lightness and insouciance in the music.”

Ruhl said adapting her play involved “a process of distillation, refinement, cutting and the little opera things like, oh, this word doesn’t sing well.” But, she added, “People who know the play will recognize it.”

They did add a chorus and another vocalist, a countertenor who serves intermittently as Orpheus’ double, singing in harmony over the baritone’s vocal line.

“When Orpheus is being a normal dude, which he is a lot of the time ... just the baritone sings,” Aucoin said. “But when he goes into his musical trance and that strange superpower takes over, I felt that I needed to musicalize his doubleness, the fact that he’s both human and something else. The countertenor hangs like a kind of halo in those moments.”

“For me, it brings out the god part of Orpheus but also the androgynous part,” Ruhl said. “When you lose yourself in art, you lose your gender, you’re kind of floating.”

Aucoin himself will conduct the orchestra, which he said is scored for “full strings, a mixture of double and triple winds, full brass, two harps, piano and a lot of percussion doing watery sound effects.”

When critics reviewed “Crossing,” they detected influences from several modern composers, including Thomas Ades, with whom Aucoin worked at the Met.

“I think a bit of Ades crept into ‘Crossing,’” Aucoin acknowledged. “But he creeps into everybody’s music these days.”

With “Eurydice,” Aucoin said, “This is the first piece where I don’t know who the influences are. And I hope that’s a good sign.”

With one — possibly surprising — exception: the English rock band Radiohead.

“They are very important to me,” he said. “There’s actually a couple of pieces in the opera where I think, `Oh, that’s a chord from a Radiohead song.’”