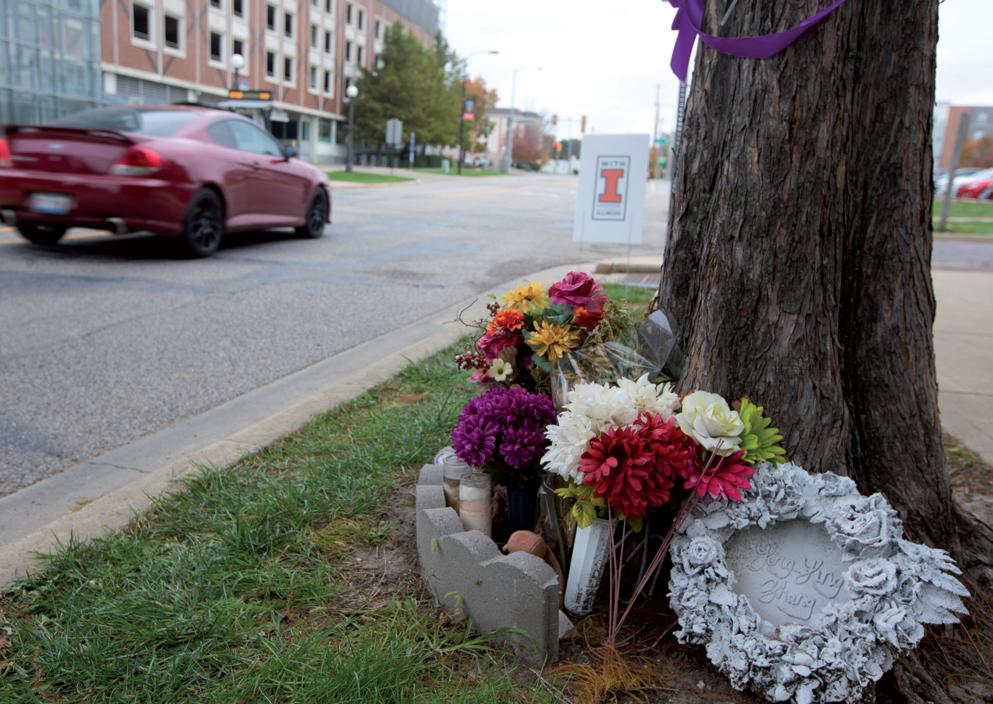 A 2017 file photo shows a memorial at the site where University of Illinois at Urbana-Champaign student Zhang Yingying was last seen, in Urbana in 2017. (Photo: Agencies)

LOS ANGELES -- "We don't portray her as a victim," Jiayan "Jenny" Shi, director-producer of the feature length documentary Finding Yingying, insisted after the film was premiered to critical acclaim on Friday at the prestigious Chicago International Film Festival.

Finding Yingying focuses on the uplifting life and tragic death of visiting Chinese scholar Yingying Zhang, who vanished on June 9, 2017 from the University of Illinois at Urbana-Champaign campus.

The Hollywood Reporter described the film as "a deft portrait of a family on the razor's edge between hope and dread"; IndieWire saw it as "handcrafted and haunting"; while a Rotten Tomatoes critic said it "shines a light on the culture clash between two vastly different countries in ways that can be uncomfortable to see."

"I was drawn to the case by the similarities in our lives," said Chinese-born Shi, formerly a classmate of Yingying's at Peking University in Beijing, who was also studying in Illinois at the time of Yingying's disturbing disappearance there.

Shi said after the premiere that unlike other true crime documentaries, she intended Finding Yingying to be "a film about Yingying's beautiful life and the impact she had on others."

Forgoing the sensationalism and gore that are the lifeblood of crime documentaries, Finding Yingying is centered not around the monster who ended her life, but around Yingying herself.

Instead, Shi brings Yingying to life as a vibrant, curious and driven young woman who thrilled to the spirit of discovery, marveled at learning new things and going to new places; who loved music, played in a band and was given to singing aloud in the fields as she studied ecology - all the while struggling to overcome feelings of homesickness and loneliness over ten thousand kilometers from home.

In short, she was an extraordinary young woman with a promising future determined to leave her mark in the world.

"Life is too short to be ordinary," Yingying said in her diary.

Shi was a volunteer in the extensive search for Yingying, which was led first by local police and later the FBI before it spiraled into an international incident making global headlines, especially in China. She began taping their investigation for her journalism class, but the film really took on a life of its own when Shi was granted exclusive access behind-the-scenes with Yingying's family.

While the film follows the search for the missing student, it gives it a soul by juxtaposing Yingying's joyful musings in her private journal with a haunting, gut-wrenching insider's view of her family's loss and despair as the search and investigation drag on and hope slowly dies.

Delving behind the scenes into the family's anguish with a frank yet sympathetic eye, viewers watch as they slide into a vortex of blame and self-recrimination that has them all teetering on the brink of an explosive collapse. Mother, Father, and kid brother Yangyang who's been marginalized and nearly forgotten by his parent's inability to see beyond their own grief.

"How can I only think about myself," queries Yingying to herself, "When having a happy and harmonious family is what I want the most? I need to make a lot of money and empower myself so I can take care of my family..." she revealed in her diary.

Studying how climate change impacts on crop yields was only her first step toward becoming "an academic mogul and skilled teacher," she dreamed. The world is a big place - but she's strong, courageous and up to the challenge.

"How big is the world? I want to measure the world with my feet!" she laughed in her diary.

That same strength and courage made her fight for her life until the very end.

Her abductor and murderer, who claimed to have killed 12 other people before being caught, who snuffed out Yingying's young life on a whim, said about her on secret FBI surveillance tapes, "She fought more than anyone else did... I couldn't believe it, she just didn't give up."

Poignantly, director Shi revealed that she had also been lonely and homesick and found adapting to the language and culture in the United States an uphill battle. She, too, had waited alone at a bus stop and been offered a lift by a stranger. Since she'd seen him at a community police briefing earlier that evening, she did something she would normally never do.

She got in his car. Fortunately, she arrived home safely.

Yingying, who made the same mistake, did not.

So Finding Yingying is Shi's homage to a young woman who, but for a random trick of fate, could have been her. When a viewer remarked that the film was so sad and asked her if there was hope in the film, Shi answered, "Yingying. She is our hope."

She and Shilin Sun, her cinematographer, use deft, compelling camerawork, elegantly-crafted and slightly oblique, to bring Yingying's private world into soft focus and give the viewer an almost poetic perspective into her eager life and inner dreams.

Shi is a master at capturing poignant little moments fraught with emotion: a slowly oscillating fan ineffective against the heat of the day, cluttered alleys choked with humanity, dishes broken in a moment of hopeless and rage, susurrating grasses in fields full of secrets, the impromptu, tender burial of a dying bird, the thousand-yard stare of Yingying's inconsolable mother as the voice of her well-meaning friend fades away...

While a very personal film, Finding Yingying subtext carries with it a cautionary tale about the perils of globalism and an unflinching look at the yawning cultural and political divide between the US and China's criminal justice systems, bureaucracies, and cultural definitions of justice. It breaks her family's hearts when her self-confessed killer gets only life imprisonment, not the death penalty.