Jennifer Aniston and David Schwimmer almost hooked up on the set of "Friends" -- but their characters Rachel and Ross nearly didn't. 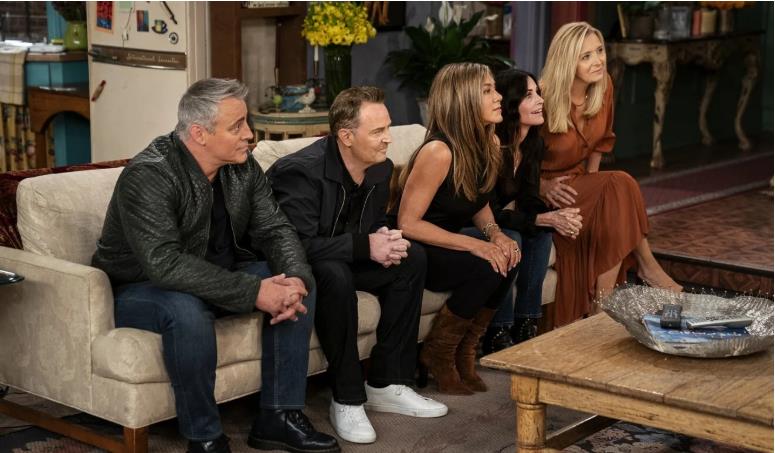 Those were among the revelations die-hard "Friends" fans were treated to Thursday as a one-off reunion special of the beloved 1990s sitcom streamed on the HBO Max platform.

Asked by host James Corden if any of the six stars had real-life chemistry, both Aniston and Schwimmer confessed to "crushing hard on each other" early in the smash hit show's run.

"I remember saying, one time, to David, 'It's going to be such a bummer if the first time you and I actually kiss is going to be on national television,'" recalled Aniston.

"Sure enough, first time we kissed was in that coffee shop," she said, referring to the New York-based show's famous "Central Perk" set.

"So we just channeled all of our adoration and love for each other into Ross and Rachel."

The two characters' on-off relationship was a cornerstone of "Friends" throughout its 10-year, 236-episode run -- which ended with a romantic reconciliation.

Co-creator David Crane said in an interview that the writers had asked themselves if the pair really should end up together.

"We discussed perhaps sort of ambivalent endings," he said.

"And we went 'No, this is 'Friends,' people have been waiting 10 years to see this couple get together, we've got to give them what they want.'"

Elsewhere in the reunion episode, Matthew Perry surprised his co-stars by admitting to having suffered severe anxiety "every night" during filming.

The creators said Monica and Chandler's romance was intended to be a one-night stand before positive audience reactions changed their minds, and that Matt LeBlanc nearly lost out on the role of Joey to the actor who would play his fake twin in a later episode.

And a parade of celebrity fans showed up.

Cara Delevingne, Cindy Crawford and Justin Bieber modelled famous comedy outfits from the show on a catwalk, while Lady Gaga sang a duet of "Smelly Cat" with Lisa Kudrow.

Reviews were lukewarm, with Deadline calling the special "more filler than killer, to put it kindly," but Variety praised "a glossy, poignant, careful trip down memory lane."

Still, it was all too much for some die-hard fans.

"I am not crying... You are crying!" tweeted one, with a clip from the reunion of Aniston drying her eyes.