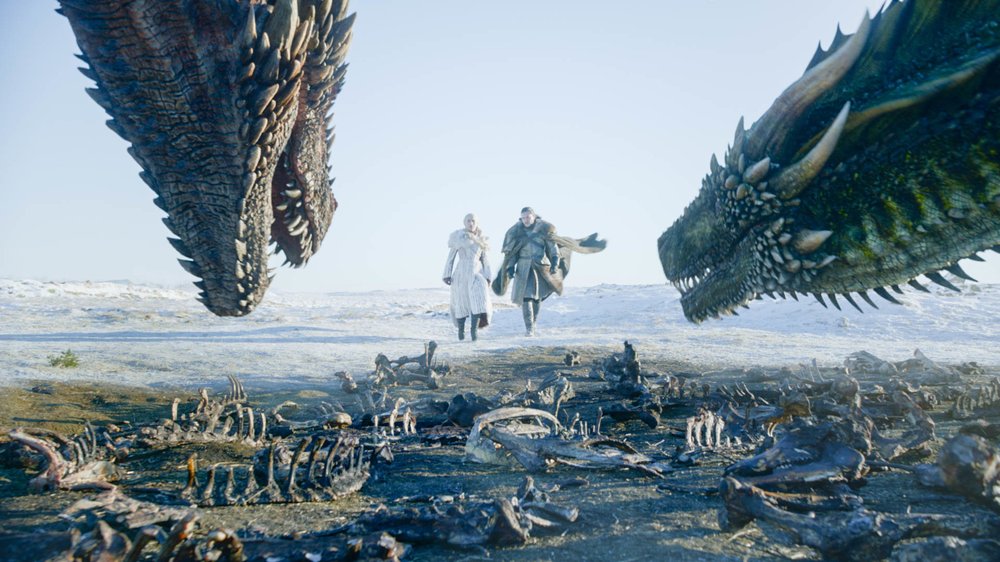 This image released by HBO shows Emilia Clarke, left, and Kit Harington in a scene from the final episode of "Game of Thrones." On Tuesday, July 16, 2019, the program was nominated for an Emmy Award for outstanding drama series. (Photo: AP)

HBO’s “Game of Thrones” slashed its way to a record-setting 32 Emmy nominations Tuesday for its eighth and final season, leading HBO back to dominance over Netflix, the streaming service that bumped it last year from atop the increasingly crowded television heap.

The bloodthirsty saga’s total eclipsed the all-time series record of 27 nods earned by “NYPD Blue” in 1994.

If “Game of Thrones” successfully defends it best drama series title and claims a fourth trophy, it will join the quartet of most-honored dramas that includes “Hill Street Blues,” ″L.A. Law,” ″The West Wing” and “Mad Men.”

The Emmy voters’ acclaim stands in sharp contrast to fan reaction to the show’s last hurrah, which included howls of laughter for a to-go coffee cup inadvertently included in one scene and a finale that detractors called unsatisfying. But the show’s ratings never faltered for the series based on George R.R. Martin’s novels, setting new highs for HBO.

A wealth of acting nominations for the cast and guest stars , including the show’s only previous winner, Peter Dinklage with three awards, helped “Game of Thrones” add to its already record haul of nominations, now at 160 total.

Series star Emilia Clarke’s decision to seek a best actress nomination after a series of supporting actress bids paid off. She’s competing in a category that’s notable for its diversity, including past winner Viola Davis for “How to Get Away with Murder” and repeat nominee Sandra Oh for “Killing Eve,” who has another chance to become the first actress of Asian descent to win the trophy. She lost last year to Claire Foy for Netflix’s “The Crown.”

Two actors of color, Billy Porter for “Pose” and previous winner Sterling K. Brown for “This Is Us,” earned drama series nods.

The rest of the drama series field includes “Better Call Saul,” ″Bodyguard,” ″Killing Eve,” ″Ozark,” ″Pose,” ″Succession” and, as the only network entry, “This is Us.”

Louis-Dreyfus, who with Cloris Leachman shares the record for most Emmys won by a performer, eight, has a shot at solo glory if she wins again.

“Veep” received a total nine nominations for its final season, a warm farewell and one that wasn’t to be for “The Big Bang Theory,” the long-running sitcom that failed to capture a best comedy nod or any for its actors. The show has company in other hit sitcoms of the past: Neither “Friends” nor “Frasier” were nominated for best series for their final year, both in 2004.

A surprising entry: the quirky “Schitt’s Creek,” which received its first best comedy series nomination for its penultimate season and bids for stars Eugene Levy and Catherine O’Hara.

“Shocked. Grateful. (expletive) Thank you thank you thank you!!!” Christina Applegate tweetedafter learning of her lead comedy series nomination for “Dead To Me.” ″Best part of the morning was my kid finding out and she screamed.”

Other top nominees include the nuclear disaster miniseries “Chernobyl” with 19 nominations and “Saturday Night Live,” which drew on Robert De Niro’s talents to play Robert Mueller last season, with 18. “When They See Us,” the miniseries that dramatized the Central Park Five case and its aftermath, received 16 bids.

HBO received a whopping 137 nominations Tuesday morning, riding the dragon wings of “Game of Thrones” and the big tallies for “Chernobyl” and “Barry.” Netflix, which last year ended HBO’s 17-year reign to win the most Emmy nominations, was bumped to second this year with 117. Amazon’s Prime Video was second to Netflix among streamers with 47 nominations.

Broadcast networks, steadily eclipsed by the rise of cable and now streaming, were far behind, with NBC getting 58 nods to top CBS’ 43, ABC’s 26 and Fox’s 18.

The 71st Emmy Awards will air Sept. 22 on Fox, with the host yet to be announced.