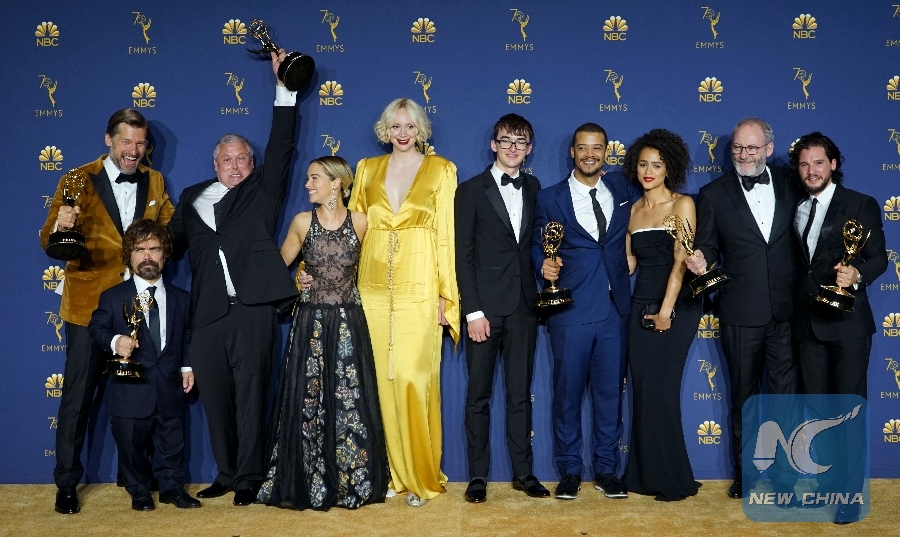 Cast members of "Game of Thrones" pose for a photo after winning the award of outstanding drama series during the 70th Primetime Emmy Awards in Los Angeles, the United States, Sept. 17, 2018. (Photo: Xinhua/Zeng Hui)

HBO's "Game of Thrones" returned to the Emmys after a year out of contention and led the nominations with 22 nods. The fantasy drama television series is an adaptation of George R. R. Martin's series of fantasy novels. It's the third Emmy win of "Game of Thrones" for best drama series following two wins in a row in 2015 and 2016. 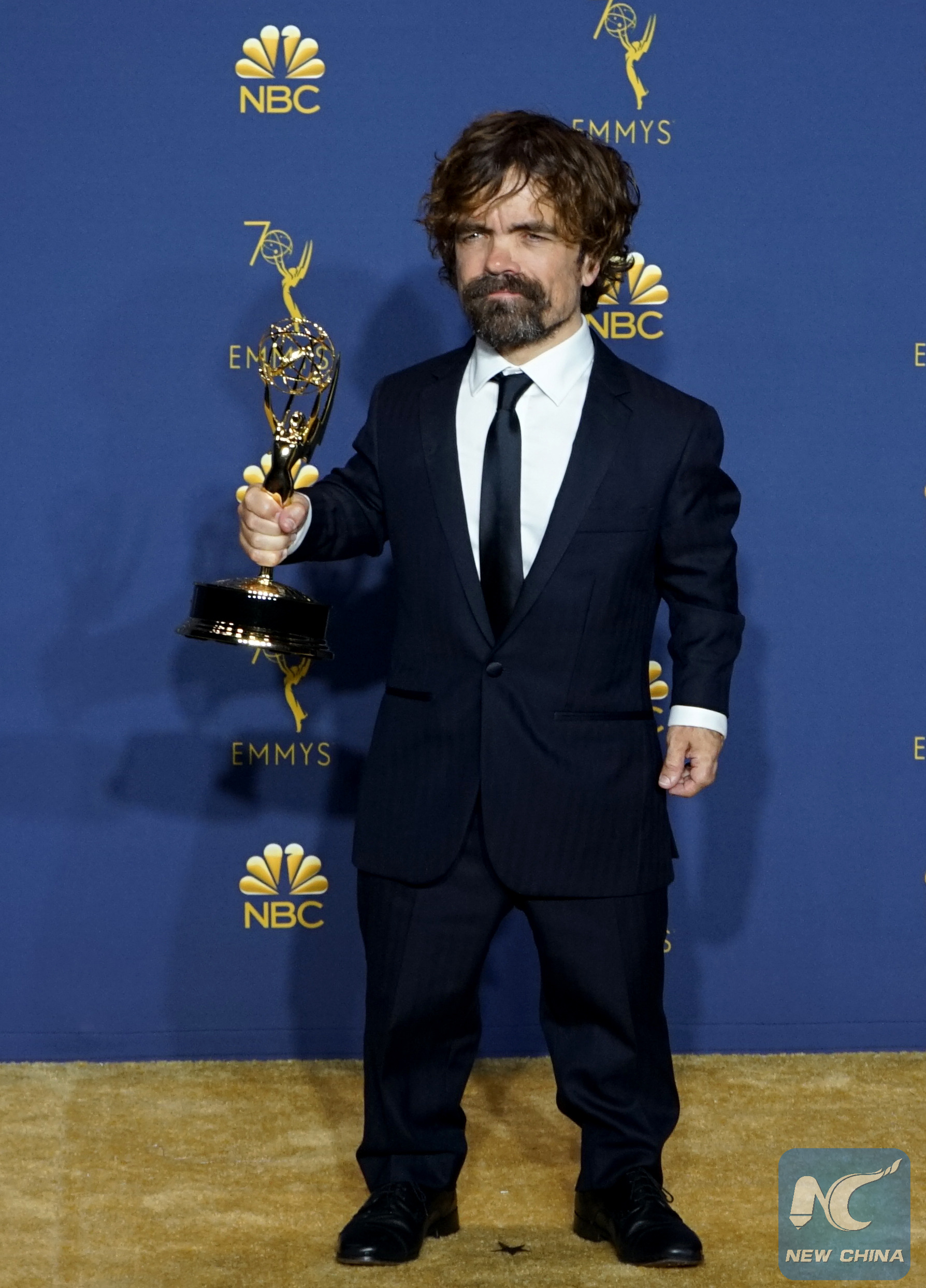 Actor Peter Dinklage poses with the award for most outstanding supporting actor in a drama series for "Game of Thrones" during the 70th Primetime Emmy Awards in Los Angeles, the United States, Sept. 17, 2018. (Photo: Xinhua/Zeng Hui)

"The show is only as good as the people who make it. And we had the greatest cast, the greatest crew and the best producers in the business. And thanks to HBO for their vision. There is no better place to work," said producer David Benihoff.

Martin, the prolific author of the series of books upon which the TV series is based, told Xinhua, "We may not have changed television, but as the first fantasy series to win Best Drama, we certainly changed the genre and opened the door for other quality fantasies."

Peter Dinklage also won his third Emmy for most outstanding supporting actor in a drama series for "Game of Thrones." Dinklage has been nominated in the category seven times and won the award in 2011 and 2015.

"I had some concerns going into this role, because usually a role about someone my size usually does not have enough depth and layers to make it interesting. This was completely different. It's bittersweet to see it end," Dinklage told Xinhua.

When asked about the relevance of the show given the transforming effects of feminist activism on the political landscape of Times Up and #Me Too movements, writer/director/executive producer powerhouse, Amy Sherman-Palladino, told Xinhua, "You can't plan that kind of perfect timing. We never expected when this came out that Hollywood would be taking down so many trolls in real life. But, nobody gives you props for playing it safe, so we went for it."

The series follows a housewife in 1958 New York City who discovers she has a knack for stand-up comedy and reinvents herself after her husband runs off with another woman.

Rachel Bronsnahan got the last laugh when she snagged the Best Lead Actress in the field for "The Marvelous Mrs. Maisel." When asked why she thought the show was so successful, she told Xinhua, "It's aspirational. I've always wanted to play complex, interesting and grounded women. And it's about a woman who reinvents herself when her dream fell apart after she achieved everything she thought she wanted. And it's filled with joy at its core."

Her co-star, Alex Borstein, who plays Mrs. Maisel's tough-talking Greenwich Village promoter, walked away with the Best Supporting Actress in a comedy.

After doing a mock strip tease on her way to the podium, Borstein said, "To my children: this is all wonderful, but none of it matters. You do!"

Hader told Xinhua, "It's surreal to me. I legit don't remember what I just said on stage! I was glad Henry (Winkler) and my other cast members pushed me to be better."

Henry Winkler has been regaling TV audiences with his signature comedy since he stole the show as The Fonz in 1974's "Happy Days." Tonight he won the statue for Best Supporting Actor in a Comedy Series. Winkler, 72, took his first Emmy of his career after he was first nominated for his role more than four decades ago.

Winkler joked, "I wrote this acceptance speech 40 years ago!"

Constance Wu, star of "Crazy Rich Asians", and Kit Harington, co-star of "Game of Thrones," presented Jeff Daniels with the trophy for Best Supporting Actor in a Limited Series for "Godless."

Best Supporting Actress in a Drama Series was lassoed by Thandie Newton, who looked shocked at her surprising win for her portrayal in "Westworld."

Best Lead Actor in a Drama Series was another surprise upset, going to the talented Matthew Rhys in "The Americans." Rhys earned his first ever Emmy Award in the final season of "The Americans."

Claire Foy took home the Best Actress in a Drama Series crown for her impeccable portrayal of Queen Elizabeth II for Netflix's "The Crown."

Foy told Xinhua, "It's been an incredible series for both Matt and I. Portraying a reigning monarch was such a challenge and a huge responsibility to get it right."

Merritt Wever, a previous Emmy winner for Nurse Jackie, took the gold for Best Supporting Actress in a Limited Series, for her work in "Godless." Wever told Xinhua, "I hadn't been thinking about winning. I just kind of dove into the character and was afraid that people would make fun of her."

The 70th annual Primetime Emmy Awards ceremony was held at the Microsoft Theater in downtown Los Angeles and aired on NBC. It's an American award bestowed by the Academy of Television Arts and Sciences in recognition of excellence in American primetime television programming.