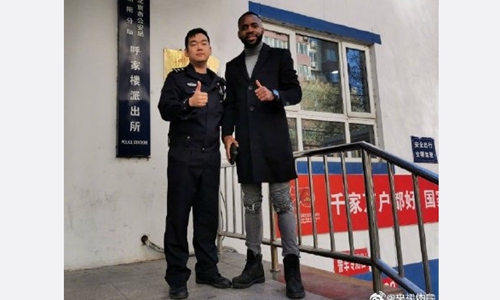 French-born DR Congo footballer Cedric Bakambu poses with a Beijing police officer after recovering his lost passport with the help of Beijing Police and a local on Wednesday. The Beijing Guoan striker had asked for help on China's social media. (Photo: Screenshot from Sina Weibo)

French-born footballer Cedric Bakambu recovered his passport on Wednesday with the help of Beijing Police and an unknown Beijing resident who has been invited to dinner, after the highly paid striker sought help on China's social media.

Bakambu, who has played two seasons with Beijing Guoan in the Chinese Super League (CSL), had written on Weibo that he would treat whoever finds his passport to a nice dinner, and it appears he intends to keep his promise.

"I really want to find the good man who picked up my passport," the striker wrote on Weibo in Chinese with the help of assistants.

"Could you please also bring your teammate Renato Augusto to the dinner? The good man will definitely want to meet him, as you missed so many scoring chances," joked another.

There are no details on how or when Bakambu misplaced his passport or where it was found.

Bakambu joined Beijing Guoan in 2018 with the club triggering a €40 million ($44.3 million)release clause in his contract with La Liga's Villarreal. He has made 54 appearances and scored 39 goals for his Beijing team.

Chinese fans often compare Bacambu to England forward Raheem Sterling, calling them representatives of "happy football," because the strikers miss so many good scoring chances and amusing fans from both teams.