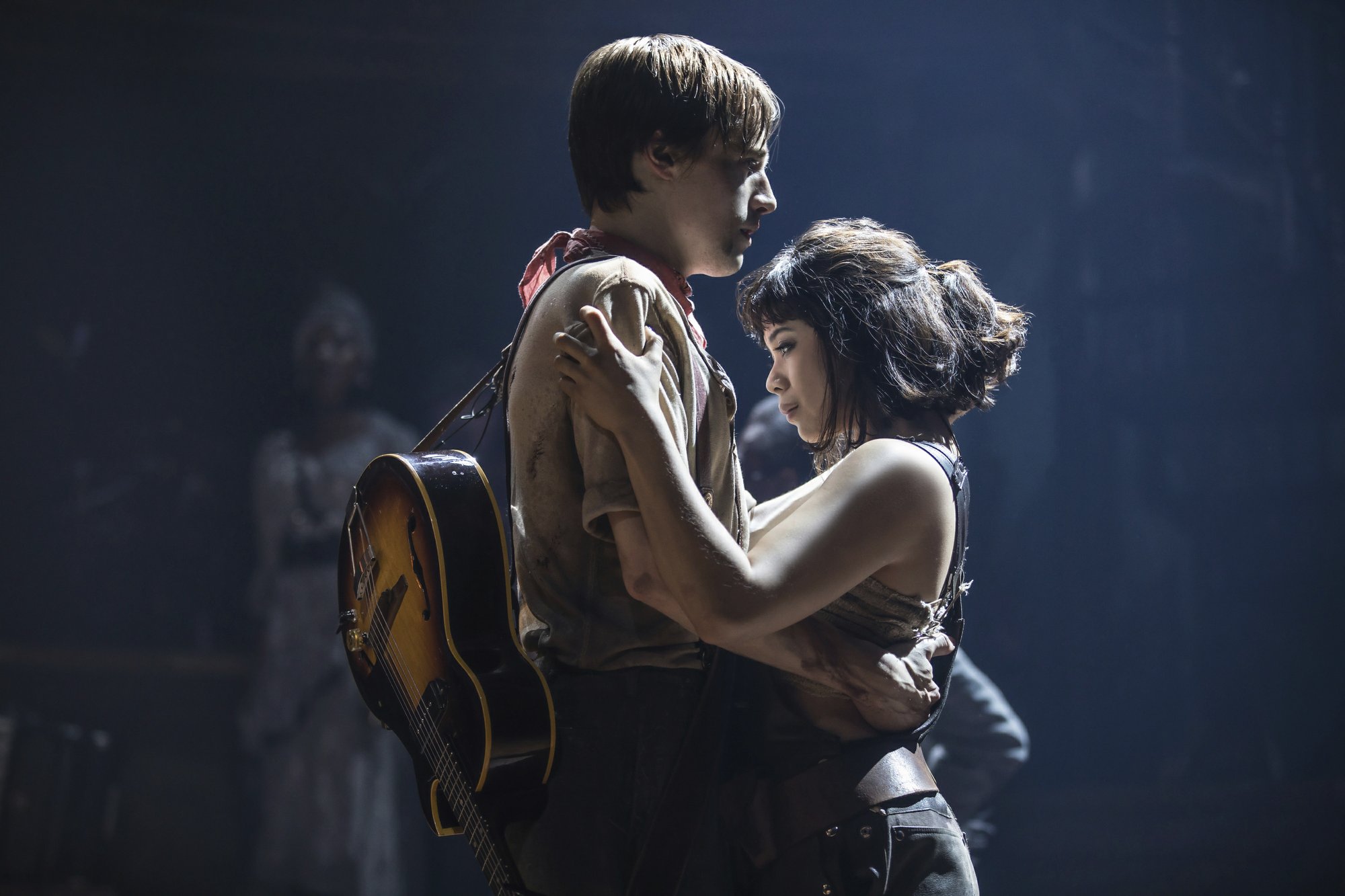 The musical “Hadestown,” which intertwines the myths of Orpheus and Eurydice and Hades and Persephone, bested more familiar names, including stage adaptations of the hit movies “Tootsie” and “Beetlejuice,” which both also got best musical nods. The giddy, heartwarming “The Prom” rounds out the best new musical category.

“Hadestown” also was the only new musical on Broadway directed by a woman, Tony Award nominee Rachel Chavkin, who earned another one Tuesday.

“I’m trying not to swear, but I am so proud of the 14 nominations. There is just not a weak spot on the team. There is no place where we haven’t all been working our asses off to make this show feel as ancient and as ‘now’ as possible, simultaneously,” she said by phone.

The best-play nominees are the Northern Irish drama “The Ferryman,” from Jez Butterworth; James Graham’s “Ink,” about Rupert Murdoch; Taylor Mac’s Broadway debut, “Gary: A Sequel to Titus Andronicus”; Tarell Alvin McCraney’s “Choir Boy”; and Heidi Schreck’s “What the Constitution Means to Me,” a personal tour of the landmark document at the heart of so many American divisions.

Des McAnuff, who directed “Ain’t Too Proud,” pointed to the timeliness of his musical, which charts the rise, sacrifices and challenges facing the 1950s group that sang “Baby Love” and “My Girl.”

“I think when people come to the Imperial Theatre, they’ll find that the story is as pertinent now as it was when they lived it,” he said. “It applies to Black Lives Matter and what’s going on in this country in terms of the tensions today.”

“Tootsie” director Scott Ellis was also recognized for being able to modernize the problematic 1982 film source, about a struggling actor who impersonated a woman to improve his chances of getting a job. The show on Broadway embraces #MeToo and the push for equality.

“We made the decision that we couldn’t and didn’t want to put the film onstage,” Ellis said after his show got 11 nods. “The core of it is still, ‘How far will someone go to do what they love?’ So that freed us up to explore relationships and how times have shifted and how women are demanding equality.”

Theater veterans were surprised to see Aaron Sorkin’s adaptation of “To Kill a Mockingbird”; “Hillary and Clinton,” about Hillary Clinton’s 2008 presidential campaign; and the stage adaptation of the media satire film “Network” not getting best play nods, though they did earn recognition in other categories. Many also expected the celebrated actress Glenda Jackson to be nominated for playing “King Lear” but it was not to be.

McAnuff said it has been a strong season for plays and wildly eclectic. “To me, that’s what the American theater’s about,” he said, adding he was surprised that Sorkin wasn’t recognized for his “brilliant” adaptation but “that speaks to the fact that there’s so many worthy works out there.”

The best original score nomination for “Tootsie” means composer and lyricist David Yazbek could be one step closer to getting back-to-back wins. His show “The Band’s Visit” won that same award on its way to being crowned best new musical last year.

Laurie Metcalf got an acting nod for “Hillary and Clinton” and if she wins the Tony this year, she will be the first person to win acting Tonys three years consecutively. (She won in 2018′s “Three Tall Women” and “A Doll’s House, Part 2” in 2017).

A sweet “Kiss Me, Kate” and a dark “Oklahoma!” make up the best musical revival category; they were the only eligible nominees. The best play revival nominees are “Arthur Miller’s All My Sons,” ″The Boys in the Band,” ″Burn This,” ″Torch Song” and “The Waverly Gallery.”

Ali Stroker, the first actress who needs a wheelchair for mobility known to have appeared on a Broadway stage, earned a Tony nomination for “Rodgers & Hammerstein’s Oklahoma!”

André De Shields earned his third Tony nomination for playing Hermes in “Hadestown” and is gunning for his first win in a career spanning 50 years. He said he felt relief and gratitude for all the support.

“Living the dream is one thing, but if you don’t stick around long enough to enjoy the dream when it becomes a reality, then what good is the dream? So here I am. I’m living the dream for a horde of people,” he said.

Nominees for best actor in a play include Paddy Considine from “The Ferryman,” Bryan Cranston in “Network,” Jeff Daniels in “To Kill a Mockingbird,” Adam Driver from “Burn This” and Jeremy Pope in “Choir Boy.” Pope is also up for a featured role in “Ain’t Too Proud.”

The category of best actress in a play includes Annette Bening in “Arthur Miller’s All My Sons,” Laura Donnelly in “The Ferryman,” Elaine May in “The Waverly Gallery,” Janet McTeer in “Bernhardt/Hamlet,” Metcalf in “Hillary and Clinton” and Schreck from “What the Constitution Means to Me.”

Nominated for best actor in a musical are Brooks Ashmanskas from “The Prom,” Derrick Baskin in “Ain’t Too Proud,” Alex Brightman from “Beetlejuice,” Damon Daunno in “Rodgers & Hammerstein’s Oklahoma!” and Santino Fontana in “Tootsie.”

Patrick Page, who has appeared in over a dozen Broadway shows including “Dr. Seuss’ How the Grinch Stole Christmas!,” ″The Lion King” and “Spider-Man: Turn Off the Dark,” earned his first Tony nomination for playing Hades in “Hadestown.”

“There have been a lot of times where I have been in the mix and haven’t been nominated. So it’s just a wonderful feeling and frankly a bit of a relief,” he said. “And especially for such a wonderful show.”

Nominees for best leading actress in a musical are Stephanie J. Block in “The Cher Show,” Caitlin Kinnunen and Beth Leavel both in “The Prom,” Eva Noblezada in “Hadestown” and Kelli O’Hara in “Kiss Me, Kate.”

Leavel, who earned a Tony in 2006 for “The Drowsy Chaperone,” joked by phone that she paced “about 4 miles” waiting for the live announcement: “I got my steps in!” Her musical, about four fading stars whose desperate need for a new stage leads them to protest a small-town prom, earned seven nods. She expects an especially fun performance Tuesday night following the nominations: “It’s just a special evening,” she said. “We get to share this moment. It’s really cool.”

Block, a veteran of Broadway shows such as “The Mystery of Edwin Drood” and “Falsettos,” got her third nomination for playing one of three actresses who portray the title character in “The Cher Show.”

“Stepping into the life of Cher each night and getting to tell her story eight times a week is a one-of-a-kind experience I will always cherish. This show has truly changed me,” she said in a statement.

Hollywood A-listers Cranston, Driver, May and Daniels made the cut but some of their starry colleagues did not, including Kerry Washington, Daniel Radcliffe, Armie Hammer, Ethan Hawke, Joan Allen, Michael Cera, Lucas Hedges and Keri Russell.

For a few theater veterans behind the scenes, the nominations were doubly good: Ann Roth was nominated for creating the costumes for both “Gary: A Sequel to Titus Andronicus” and “To Kill a Mockingbird,” while William Ivey Long earned nods for both “Beetlejuice” and “Tootsie.”

The awards will be presented June 9 at Radio City Music Hall in New York City, airing on CBS. James Corden, the host of CBS’ “The Late Late Show” and a Tony winner himself, will host.

Ephraim Sykes, nominated for best featured actor in a musical for playing David Ruffin in “Ain’t Too Proud,” couldn’t believe he’ll be attending the telecast.

“I don’t feel quite real right now,” he said by phone. “When I heard my name announced, my spirit shook and my body just wanted to shut off. It’s almost hard to believe that something like this can really happen.”