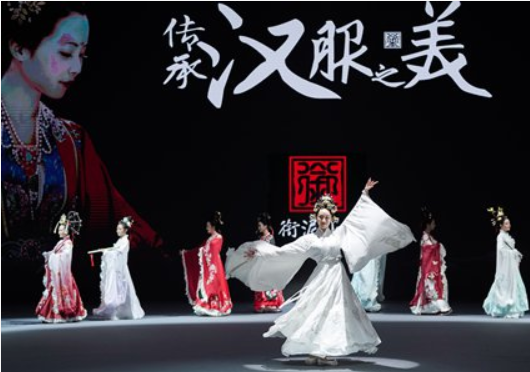 Traditional Chinese hanfu garments have become a major highlight at the ongoing Beijing Fashion Week, which kicked off on Friday. A total of 50 haute couture and premium ready-to-wear hanfu dresses were displayed by Chinese brand Xiannixiaozhu and its subsidiary Xiantang to applause from the audience and fashionistas.
The new releases include a number of collections such as Twelve Flora, Glorious Age of Tang Dynasty and a Wedding series as well as children's clothing from Xiantang.
Wearing jewelry from Qinghe and styles from Nalan Beauty Academy, models dressed in hanfu clothing transported attendees to centuries past, when traditional Chinese clothing reigned supreme.
According to Xiannixiaozhu representative Huang Chunyan, the brand's show aims to bring China's own aesthetic standards to Beijing Fashion Week.
"We want to let the world know our beauty through hanfu," she said.
"It is our cultural confidence. These glorious dresses will allow more Chinese to learn about our own style and remember our beautiful hanfu. In addition, we see children as the inheritors of our culture, so we have also released clothing for them under our Xiantang label."