CULTURE 'Hardwork' chosen as 'hot' word of the year

'Hardwork' chosen as 'hot' word of the year 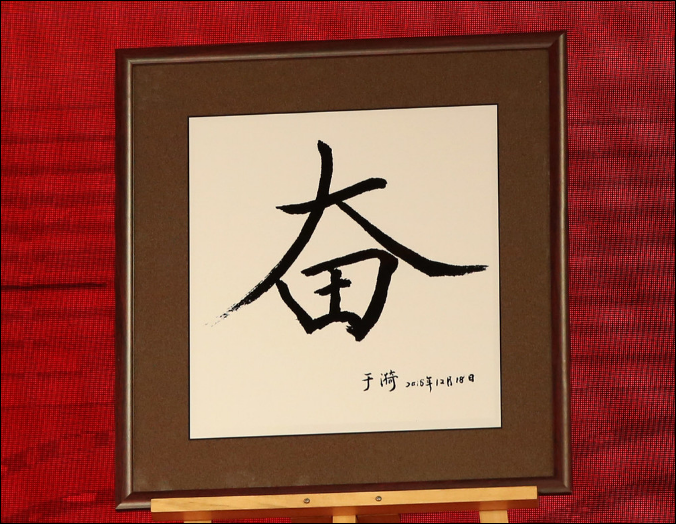 They are among a list of popular words and phrases collected during a campaign that assessed characters used by Chinese-language media. Organizers included the National Language Resource Monitoring and Research Center and the Commercial Press.

The campaign received thousands of suggested characters and words by netizens nationwide since it started on Nov 20. It is the 13th time the lists were published.

"Hardwork" was mentioned by President Xi Jinping in his 2018 New Year's address. "I feel the millions of ordinary Chinese are the greatest, and I also feel that happiness is achieved through hard work," he said.

The phrase "happiness is achieved through hard work" quickly gained popularity nationwide, and has become a buzzword among Chinese people.

The word "withdraw" made the list because it was widely used by Chinese netizens and media this year to describe the behavior of high-profile political leaders who have chosen to withdraw from previously established terms and coalitions.

In 2018, such behaviors included Brexit, and the US withdrawal from the 2015 Iran nuclear deal, the United Nations Human Rights Council and the Universal Postal Union.

In 2018, China is celebrating the 40th anniversary of reform and opening-up, a campaign started by late Chinese leader Deng Xiaoping and now carried forward by Xi, who reaffirmed China's commitment to opening up even more to the world at a grand gathering on Tuesday.

Over the past 40 years, China has recorded average annual GDP growth of around 9.5 percent. This contributed over 30 percent to global economic growth and lifted more than 740 million people out of poverty, Xi said, calling the four decades "a glorious process".

China and the United States have been locked in trade disputes since July 6, when they each applied tariffs to imports of the other's goods. But on Dec 1, the day after the presidents of two sides met at the G20 summit in Argentina, they agreed to a truce.

Expressions such as "community with a shared future", "China International Import Expo" and "constitutional amendment" also were among the hottest terms.

Xiong Bingqi, vice-president of the 21st Century Education Research Institute, said: "These popular phrases, which were chosen based on netizens' votes, give a complete picture of people's lives in China in 2018."

They can encourage people to record their lives and depict changes in society and the world in words, he said.

If these hot phrases can survive the test of time, they may even be included in the Modern Chinese Dictionary, which serves as the standard authoritative reference book, he said.