CULTURE 'He did talking on pitch': Saracens coach hails Vunipola in Euro triumph

'He did talking on pitch': Saracens coach hails Vunipola in Euro triumph 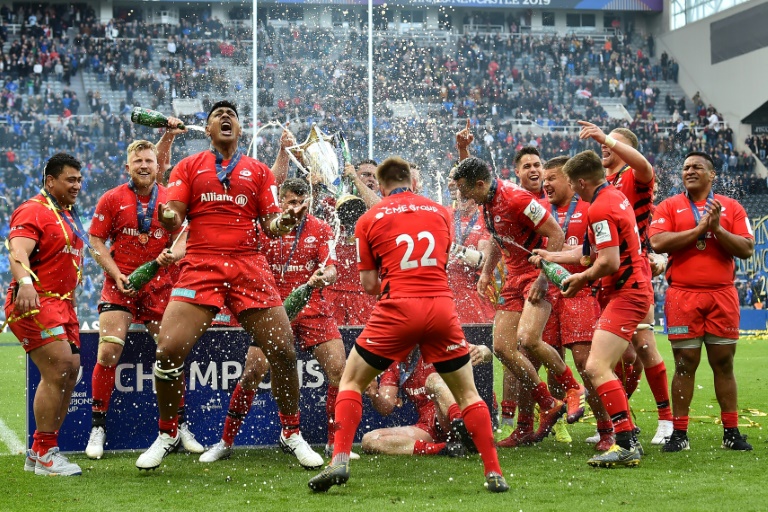 Saracens coach Mark McCall praised controversial England star Billy Vunipola for "doing his talking on the pitch" after scoring the try that cinched a hat-trick of European Champions Cup titles for the London club.

A month after being given a warning by his club and the English RFU for a social media post supporting a homophobic message by Australia full-back Israel Folau, Vunipola held off three defenders to nail the 67th minute try that helped Saracens to a 20-10 win over four-time champions Leinster.

Vunipola and his team-mates had to dig deep to overturn a 10-0 deficit and McCall said: "It's obviously been a complicated five or six weeks for him and for the squad, but what we needed from him was to do his talking on the field, not off it.

"I think he's been really good, and his team mates have supported him very well."

Saracens showed their fighting qualities by wiping out a 10-0 Leinster lead and overcoming the temporary loss of flanker Maro Itoje to a yellow card with ten points in the final two minutes of the first half.

A try by Scotland winger Sean Maitland and a conversion and penalty by England fly-half Owen Farrell drew the Londoners level by half-time and proved the springboard for their third Champions Cup crown in four years.

"It was pivotal in terms of the way it changed the momentum of the game," said Saracens centre Brad Barritt, who emerged with the man of the match prize after becoming only the second player to captain a team to three wins in Europe's premier club competition after Leinster coach Leo Cullen.

"There were a few words said behind the posts after Leinster scored their try. Owen, in particular, just said that at times we'd been a bit tentative. We hadn't quite been ourselves.

"It was almost like the Maro yellow card released us and allowed us to play our game. I can't speak highly of the leaders around me but more importantly how the team responded to these key messages.

"A message is only as good as the guys who follow it and today they were phenomenal."

In denying Cullen's Leinster what would have been a record fifth title, Saracens became only the fourth team to complete a hat-trick of Champions Cup wins, following Toulouse, Leinster and Toulon.

They also have the chance to complete a European and domestic double, with a place in the English Premiership semi-finals already assured.

Leinster, 15-12 winners against Racing 92 in last year's try-less final in Bilbao, are left with just the Pro 14 title to chase. They have a home semi-final against Irish rivals Munster in Dublin next Saturday.

They were left ruing their inability to hold on to the hard-earned lead they gained courtesy of a 32nd-minute try by prop Tadhg Furlong and a conversion and penalty by their captain and stand-off Johnny Sexton.

"They won the big moments," said Sexton. "They're good at what they do. They try and steamroller you."

Coach Cullen said: "They’re a big, physical team with lots of quality. When a team's trying to chase the game against them it's so difficult because they’re so aggressive.

"I thought they did that very well. They strangled us in the last 20 minutes.

"We're gutted now but we just need to dust ourselves off. We've got a huge game against Munster next Saturday."