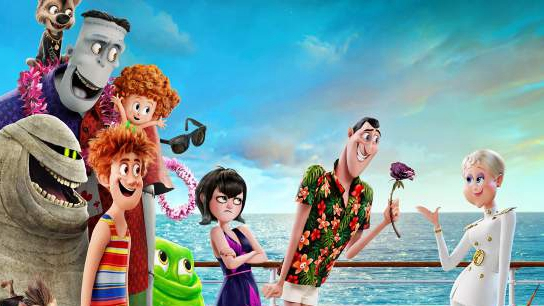 The animated film tells the story of Count Dracula (voiced by Adam Sandler) who tries to find love on a cruise, after his daughter Mavis (voiced by Selena Gomez) decides it's time for him – and the monster family – to take a vacation from taking care of everyone else's vacation.

As a classic family-friendly Hollywood film, love and acceptance are mainstay themes of the “Hotel Transylvania” series. In the first installation, Count Dracula goes from loathing humans to accepting his daughter's marriage to a human. In the second, Dracula is concerned about his mixed-blood grandson and learns to accept the differences between monsters and humans.

The positive ideas of this movie, delivered through goofy humor, make the series enjoyable by both children and their parents.

The movie’s release in China coincided with Chinese Valentine’s Day, or Qixi Festival, with Count Dracula’s possible love adventure at sea attracting many couples to movie theaters in the country.

"I’ve watched this film with my boyfriend, and we looked at one another several times to say I love you throughout it," said a user of Douban – the Chinese version of Rotten Tomatoes.

"In real life, sometimes adults need fairy tales more than children. This movie tells us that life is not a competition. Instead of living according to rules, we should cherish every piece of pure happiness instead," commented another user.