CULTURE 'How are we going to eat?' Virus tests Europe’s social nets

'How are we going to eat?' Virus tests Europe’s social nets 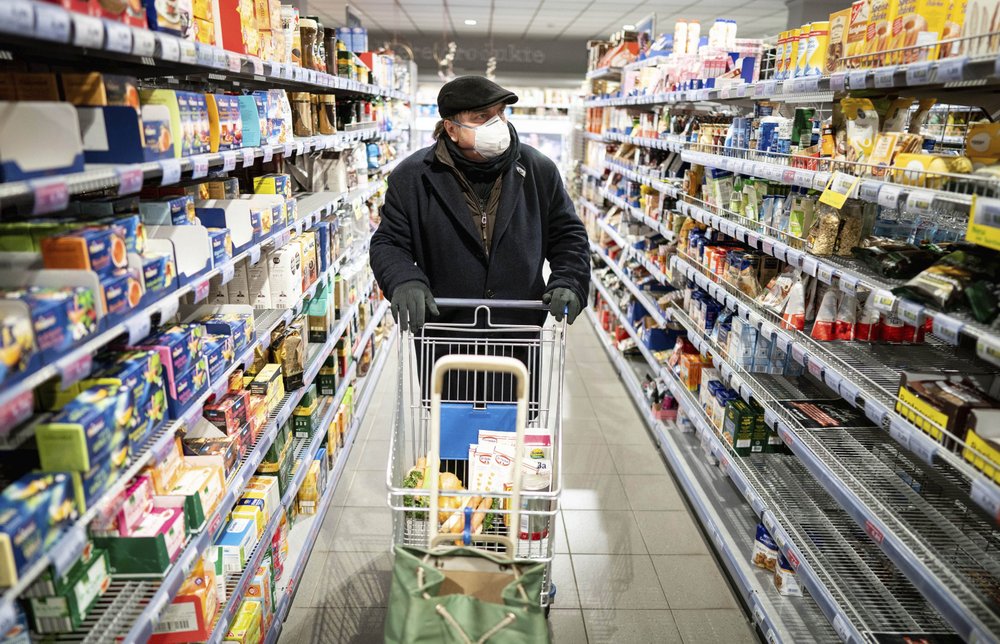 A customer wearing a face mask and gloves goes shopping in the early morning in a supermarket in the Berlin district of Friedenau, Germany, Tuesday, March 17, 2020. (Photo: AP)

The morning rush-hour scene at Madrid’s Atocha train station this week perfectly captured the dilemma facing Europe as it confronts the coronavirus.

Governments have locked down commerce, beefed up health care measures and earmarked billions of euros into Europe’s famed safety nets to cushion the economic blow to businesses and blue-collar workers alike from measures meant to contain the virus.

But trimmed commuter train schedules at Atocha, the main gateway into the Spanish capital for the working classes, meant that huge crowds formed on the platforms, defeating the government’s appeal for “social distancing.” Layoffs looming and real meant that those who still had work reported for duty - with or without protective masks - even if they would have preferred to stay home.

“I fear the coronavirus, but I fear more not being able to pay the utility bills,” said Mari Carmen Ramírez, 55, who was commuting to her 950-euro ($1,100) a month job as an office cleaner. “When this is all over, how are we going to eat?”

As European governments pass sweeping spending measures to address the pandemic, they are being called on to look out for the workers who are not only losing their jobs - the waitresses and tour guides, hairdressers and hotel maids - but those who still must show up because they can’t work from home. Europe’s famed safety nets are being stretched thin, at a time when many economies were already skirting recession and wealth gaps have grown.

Will it be enough?

Governments from Prague to Paris, Lisbon to London are deferring tax payments, approving short-term unemployment schemes and paid sick leave to cover even those in preventive quarantine. Hardest-hit Italy approved 25 billion euros in measures, including vouchers for babysitters. The Czech government offered a 750-euro stipend for students studying abroad who opt to stay abroad through Easter. Denmark said it would pay 75% of employees’ salaries if companies promise not to fire staff.

“This epidemic will be a catastrophe for all countries of the world,” warned French Finance Minister Bruno Le Maire in announcing 45 billion euros ($50 billion) in aid for small businesses on top of the tens of billions already promised for individuals forced to stop working because of workplace closures.

“The shock will be violent.”

In Spain, now with the second most infections in Europe after Italy, the left-wing coalition government announced Tuesday a mix of social and economic measures, including credit guarantees for companies and subsidies for workers, worth one fifth of the country’s annual GDP.

“We want a way out of the economic emergency in a V-shape rather than in an L-shape, for the onset to be of a rapid recovery and not stagnation,” he said.

The economic blow is already evident with companies likes German carmaker Volkswagen’s Spanish unit temporarily laying off more than 14,000 from its Martorell plant, near Barcelona. The workers will be paid 80% of their wages until they are re-hired, hopefully as soon as the economy recovers.

The economic pain is particularly high in countries like Italy and Spain, which are still feeling the aftereffects of the global financial crisis. The percentage of people classified as economically vulnerable - those who are poor, face high debt or unemployment - was 26% in 2017 in Spain, higher than the European Union average of 22%.

“I have no gloves, no mask, but supermarkets are to remain open, we have been told,” said Génesis Suárez, a 25-year-old supermarket clerk who commutes from Atocha and whose father was fired from his construction job on Friday.

“With my father at home, I need to contribute to the family’s cashbox. We are still going to receive the electricity bill at the end of the month, aren’t we?”

Policymakers’ initial response to the turmoil was focused on keeping the financial system running with central bank interest rate cuts and cheap loans for for banks.

Governments have also pledged loans, with Germany offering at least 460 billion euros ($513 billion) in guarantees. Several countries are expanding short-term work programs that were successful during the 2008 financial crisis in keeping people on the payroll.

But again those measures do not address the needs of many of the most vulnerable: the poor but also manual laborers like cleaners and contractors without a fixed salary.

“We have about 50% slump in food collection,” said Sabine Werth, head of the “Berliner Tafel” food bank in the German capital, where donations are drying up. Already seven of the food bank’s 45 distribution points have closed, depriving the neediest of food close to home.

While some governments, like those of France and Denmark, have promised to guarantee the majority of individuals’ salaries, detail on how they will do that is still largely unclear - though urgently needed.

Jim O’Neill, the former chief economist at Goldman Sachs who is now chair of the U.K.-based Chatham House think tank, said cash should be funnelled directly to people.

That would be an evolution of the monetary stimulus central banks have provided since the global financial crisis 12 years ago, in which they injected newly created money into the banking system.

“At the core of these views is the notion of giving money to people, especially lower income people, directly paid for by our central banks printing money,” he said in a note. “Until recently, I found myself having very little sympathy with these views but, as a result of COVID-19, I have changed my mind.”

Britain will ensure workers are entitled to the legal minimum sick pay from the first day of illness rather than from day four. It’s unlikely to be enough, however, since the legal minimum is a mere 94.25 pounds ($115) a week.

An analysis by the Resolution Foundation think tank in Britain suggested that a typical self-employed worker could see income fall by three-quarters if forced into quarantine, while a typical worker eligible for the legal minimum would lose over two-thirds of normal pay.

Governments are also postponing the payment of taxes, social insurance and mortgages and offering extra paid leave, though the measures appear to be piecemeal.

’’Many Italians are in the front-line trenches: in the hospitals, in the factories and in the pharmacies, behind the cash registers at the supermarkets,” Italian Premier Giuseppe Conte said in a national address.

’’No one will be abandoned,” he vowed.

The workers reporting for the night shift at the Tenaris steel plant in Bergamo, Italy, felt more than abandoned. They felt terrified. They had been demanding for over a week to be allowed to take vacation rather than continue working with coronavirus claiming more infections in the province of Bergamo than anywhere else in Italy.

Factories had been exempted from the government’s March 11 shutdown decree, meaning the blue-collar workers of Italy’s industrial heartland were forced to report for duty. Last week, workers at plants across Italy began going on strike or threatening to do so.

“We were really afraid, to be sitting side-by-side for eight hours without knowing what the conditions were,” Tenaris steelworker Giambattista Morali said. “The company disinfected and gave us some more masks, but it wasn’t enough because we couldn’t guarantee that we’d be working one meter apart.”

While many people suffer relatively mild symptoms from the virus, the mortality rate has been particularly high in Italy, thanks in part to its elderly population.

The same health concerns abounded this week at the Atocha station, where railway officials weren’t doing anything to distance commuters jostling to catch their trains.

“What is this?” wondered Antonio Galiano, a 38-year-old commuter. “Be serious, please, it’s our lives that are at stake.”