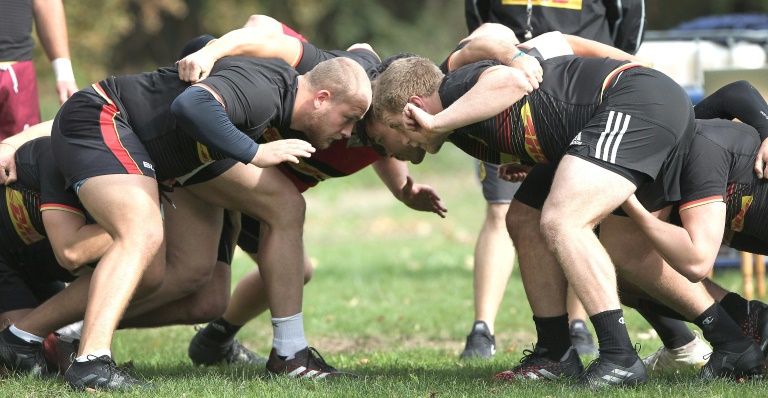 For Germany's part-timers the repechage tournament in Marseille is the closest Germany have ever come to Rugby World Cup qualification. (Photo: AFP)

Mike Ford, a former British and Irish Lions defence coach, admits it's humbling to help Germany's part-timers prepare for their once-in-a-lifetime chance to qualify for the 2019 Rugby World Cup.

Ford, who has also worked with the England and Ireland national teams, has been brought in as Germany's head coach for the repechage tournament in Marseille against Canada, Kenya and Hong Kong which starts on Sunday.

he tournament will decide the last remaining berth for the 2019 World Cup and the repechage winner will join powerhouses New Zealand and South Africa, plus Italy and Namibia, in Group B in Japan.

This is the closest Germany have ever come to Rugby World Cup qualification and Ford, the Lions' defence coach in New Zealand in 2005, is putting together their game plan for the one-off tournament.

Much is at stake for the German Rugby Union.

Having already pumped in millions of euros, their wealthy backer Hans-Peter Wild, the owner of Stade Francais in Paris, has only promised to financially support the national XV team until the Marseille tournament.

Geography is also an issue as Ford, England's defence coach when they lost the 2007 World Cup final to South Africa, is working with a squad of semi-pro players scattered across clubs in Germany, France and Britain.

However, the ex-Bath and Toulon head coach promises Germany's part-timers will be the "hungriest" of the four teams fighting for a ticket to Japan.

"The commitment the players show is humbling, they aren't paid much, but they do it because they love the game and want this opportunity," Ford told AFP after a training session in Heidelberg.

"You coach the top teams around the world, then you come to Germany where you are back down to coaching players who are part-time.

"They get up early in the morning, do a shift here with the coaches, go to work, then have team training at night.

"Hopefully we can surprise the other teams in Marseille with our heart, commitment and our game plan.

"It's an exciting and unique challenge -- we'll be the best prepared team there and the hungriest."

Luck, a bizarre set of circumstances and a multi-layered qualification process combined to give Germany one last chance to go to Japan.

A strike by the senior national squad, over a dispute about funding, meant an inexperienced team, largely made up of young fringe players and Sevens specialists, lost all five games in this year's Rugby Europe Championships -- the level below the Six Nations.

Germany finished last, but were catapulted up to third in the table after Spain, Belgium and Romania were all deducted points for fielding ineligible players.

Even though their senior players ended their strike and returned, Germany were still thumped 66-15 in the first-leg in Apia.

A battling display in the return in Heidelberg saw Germany lead 28-21 with 14 minutes to go before Samoa pulled away with three late tries in a 42-28 victory -- a sobering 108-43 aggregate defeat for the Germans.

Now Germany, the lowest ranked of the four teams in Marseille, play Hong Kong on Sunday November 11, Canada on November 17 and Kenya on November 23 to decide which of the quartet goes to Japan.

"It's a fantastic chance, but a bit of a weird one, given the disqualification of teams, but now we have the opportunity, we want to take it with both hands," said Germany captain and scrum-half Sean Armstrong, 31, who moved over from Brisbane a decade ago.

"It'd be huge if we qualify for the World Cup - the biggest thing that has ever happened in the history of rugby here."

No stone has been left unturned in the hunt for a World Cup berth.

Ex-England lock Mouritz Botha, who was born in South Africa, came in last year as forwards and defence coach, while Australian Paul Healy, technical advisor to Uruguay at the 2003 World Cup, coaches the attack.

"Something I tell the guys is that we need something like this to kick-start rugby here," said Botha, the ex-Saracens and Newcastle lock, who made the last of 10 appearances for England in 2012.

"When I was growing up in 1995, when South Africa won the World Cup, those guys were my idols and my dream started to become a professional rugby player.

"The same thing can happen here. Those dreams will start now for young kids here.