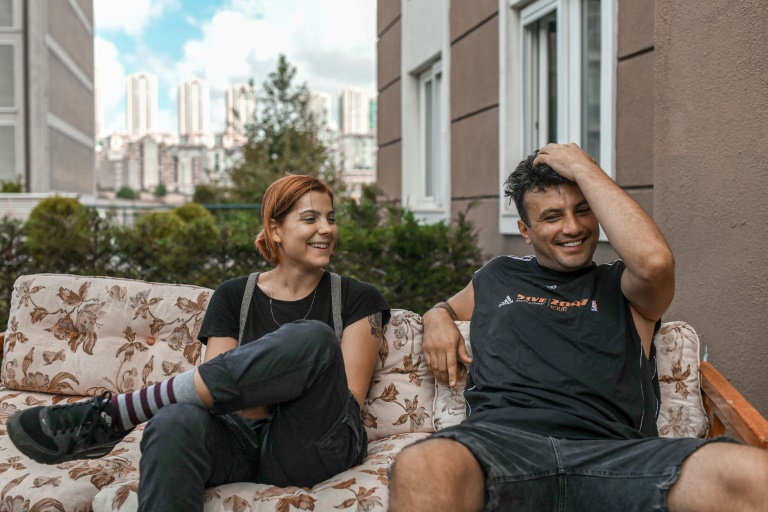 Deniz Tekin (L) and rap singer Samet Gonullu were among 20 Turkish musicians to tackle a broad range of issues in the 15-minute rap song. (Photo: AFP)

A 15-minute rap song has taken Turkey by storm, touching a nerve in the polarised society at a time when artists are finding a voice after years of stifled dissent.

A week after its release on September 6, "Susamam" ("I cannot stay silent") had hit more than 20 million views on YouTube, reaching an audience far beyond the usual hip-hop fanbase.

Perhaps the most striking section tackles free speech and the rule of law, with Saniser (real name Sarp Palaur), the mastermind of the project, rapping: "I'm too scared to send a tweet, I've come to fear my own country's police."

The song proved well-timed. A few hours after its release, the head of an opposition party in Istanbul, Canan Kaftancioglu, was sentenced to nearly 10 years in prison for tweets and other messages deemed "terrorist propaganda" and insulting to the president.

Kaftancioglu shared the song on Twitter with a message: "I cannot stay silent either."

The song opens with an announcement that music is entertainment, but can also "bring about change".

"Of course it's not possible to change the whole of society with just one song but I think the more people we win over, the better," Samet Gonullu, whose stage name is Sokrat St, told AFP.

"We see a spark blazing up. Whether or not it will continue time will tell."

Dogan Gurpinar, a historian at Istanbul Technical University, said the song was actually a sign of renewed hope among liberal critics of President Recep Tayyip Erdogan, who have often felt powerless against a crackdown on a range of political opponents in recent years.

The biggest boost has been the opposition's victory in Istanbul mayoral elections this year, especially after the controversial decision by authorities to annul the initial result.

"The political climate (since the mayoral vote) has offered a glimpse of hope and stimulated an appetite for action," said Gurpinar. "(Susamam) is not a revolt but a sign of optimism," he said.

Erdogan's ruling party is not impressed. "Art should not be a tool of provocation and political manipulation," said its deputy chair, Hamza Dag.

The most fervently pro-government paper, Yeni Safak, even claimed Susamam was "a joint production" with Kurdish terrorists and the FETO organisation blamed for an attempted coup in 2016.

Sokrat St said the accusations were "a joke" and that they were unafraid of the consequences.

"To put us in the same category with terror groups and portray us as part of a conspiracy is very bizarre," he told AFP. "There is nothing to be scared of... There is not one single illogical sentence in the entire song."

If anything, he says the song could have been longer.

"There are issues that have not been addressed," he said, highlighting terrorism and LGBT rights. "I wish it were longer with more rapper friends and we could have touched those issues one by one."

The lone female in the video, singer-songwriter Deniz Tekin, does touch a particularly topical issue with her contribution about violence against women.

It came just days after the murder of a 38-year-old woman named Emine Bulut by her ex-husband was partly captured on video and caused a national outcry.

"Women are regarded as a secondary gender not only in Turkey but in the world," she told AFP.

"I don't think I've said enough, because it's not a subject that can be explained in 30 seconds."

Susamam is not alone. Just a day earlier, one of Turkey's best-known rappers, Ezhel, posted the song "Olay" (Incident) with a powerful montage of footage that had over a million views in a few hours.

The video pieced together news footage from the past decade, including anti-government protests, police brutality, war and refugees.

Such songs will not have an overnight impact on politics, said Gurpinar.

"But there is no doubt that these tough messages will leave a mark."