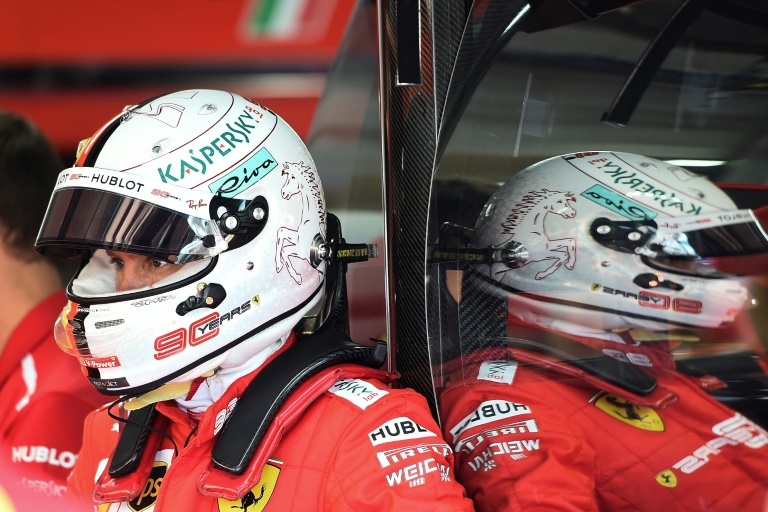 Sebastian Vettel looks on in the pits.(Photo: AFP)

A subdued Sebastian Vettel appeared to be feeling the pressure on his shoulders Saturday when he qualified only seventh for Ferrari at the French Grand Prix.

The four-time world champion, who married his long-term partner Hanna Prater between the Canadian and French race weekends, showed none of the joy of a newly-wed despite sporting a wedding ring.

This was likely due not only to his disappointment on track, but also the failure on Friday of Ferrari's attempts to gain an official review of his controversial five-second penalty in Montreal.

Close observers, including his former boss Red Bull team chief Christian Horner, have suggested he has been showing signs of strain at Ferrari and there was no denying it on Saturday's form.

"I don't know what happened," he said of his aborted first lap in Q3, following an upshift problem.

"I lost so much momentum there was no point to finish that lap.

"It was up and down. Some laps it felt good and others it didn't. I didn't get the best out of the car, but it was difficult for me. Some laps I didn't have the grip I had before. It's a shame it happened in Q3.

"Mercedes are far away for us, but we should be in the mix with Red Bull."

After his on-the-road victory from pole position in Canada, which was re-classified as second place following the application his five-second penalty for re-joining the race in an unsafe manner after going off, Vettel has been the focus of attention in the sport.

Before qualifying on Saturday, Horner suggested that he was feeling the heat of a "pressure cooker environment" at Ferrari, where much has been expected of him.

"With us, Sebastian was like a metronome when he was in the lead of a Grand Prix," said Horner.

"He was always so strong in that position. Obviously, he looks a lot more under pressure these days as he is carrying the hopes of Ferrari in what looks like a pressure-cooker environment."

Vettel has not won a race in 15 outings since last year's Belgian Grand Prix and Ferrari have not taken a drivers' championship in 12 years since 2007 with Kimi Raikkonen.

His four world titles all came in succession with Red Bull before he joined Ferrari where he was cast as the man to bring a Michael Schumacher-like revival in fortunes to the team.

Instead, he has struggled with the team to find the speed and consistency to trouble the Mercedes juggernaut of power and success.

This has led to questions about his motivation and rumours that he may be contemplating retirement. These were heightened when he said recently that he was no longer racing in the sport that he once loved.

On Saturday, after qualifying seventh, he was seen in dark sun-glasses as he fulfilled his media duties.

"I'd better watch what I say," said former champion Damon Hill, a pundit for Sky Sports, as Vettel walked by.

"But I think he needs a re-boot and to find a way to be happy again and to enjoy his racing again."