CULTURE ‘I’ve got one!’ Hunting neon scorpions in the Arizona desert

‘I’ve got one!’ Hunting neon scorpions in the Arizona desert 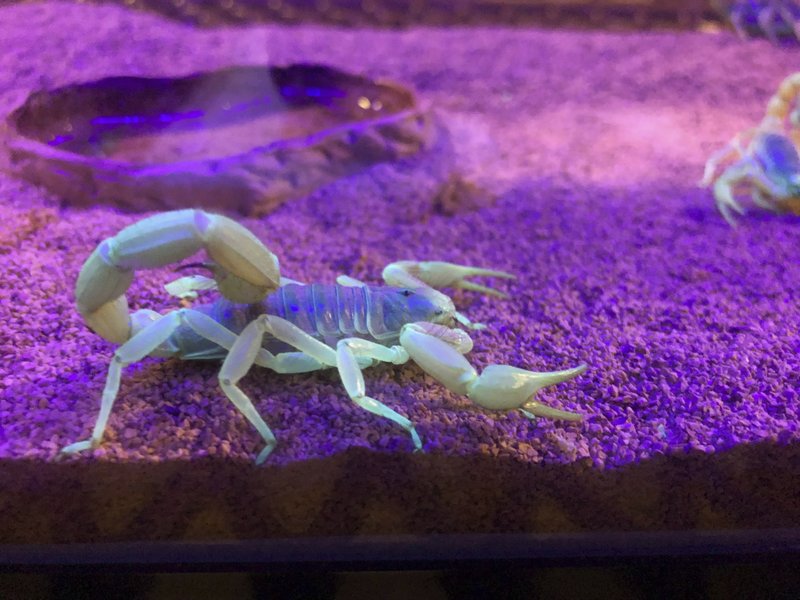 In this Aug. 18, 2019 photo, a scorpion appears in a tank after being captured in Lost Dutchman State Park, Ariz. (Photo: AP)

As the setting sun left a yellow tinge on dirt-colored cactuses as far as the eye could see, park ranger Anna Roberts gave us a lesson on what we were about to hunt.

“Scorpions know they will not kill us because we are much larger,” said Roberts, explaining that the animals’ first instinct would be to escape, not sting, and that fatalities from bites in the U.S. were rare. “So, you don’t have worry about that.”

The light-hearted preparatory chat also came with a serious message: Don’t be dumb with scorpions, which move quickly on eight legs and are equipped with pincer claws and curved tails that lash enemies and deposit venom.

Closed-toed shoes were a must, the critters should only be picked up with tongs, and they should not be played with — a message I made sure my oldest children, boys ages 8 and 9, heard.

Having just moved with my family to Arizona, the excursion struck me as a uniquely desert-life thing to do. However, my wife, who rightly said taking our 3-year-old would have been a bad idea, thought I was nuts.

For whatever reason, I’ve always found scorpions intriguing, if not a little terrifying. A glance at popular culture tells me I’m not alone.

The AP's "Get Outta Here" podcast.

In movies, on the skin of many tattoo lovers and in one of the 12 astrological signs, scorpions’ distinct shape and supposed attributes are often on display. They are portrayed as savage, lethal, true warriors — not far off from what we were about to see on the hunt.

As we walked into the desert under the moonlight, we carried flashlights to see where we were stepping. The terrain was rocky, dusty and uneven, mixed with rough underbrush. Crucial to the hunt, however, were black lights: Scorpions glow under ultraviolent lights for reasons that scientists don’t know.

“Why they fluoresce is the million-dollar question,” said Lauren Esposito, curator of arachnology at the California Academy of Sciences. Some theorize that the light scares off would-be predators, while others think it might attract pollinators, potential prey.

A few minutes into the hike, neon green shapes began appearing. They ranged in length from a small grasshopper to a human finger. Upon our approach, the scorpions would sometimes scurry away, sometimes duck into a hole and, just as often, raise their pincers and arch their tails in preparation for battle. There is a reason they are apex predators in the invertebrate food chain.

“I’ve got one! I’ve got one!” people began shouting, capturing them with tongs from behind. “I need a box over here!”

A handful of people carrying plastic containers, including my sons, would come over, opening the cap so a writhing scorpion could be placed inside. Everybody around would stop, shine black lights and stare as the scorpion began moving from one side of the box to the other.

“This is awesome!” said James Brine, a 37-year-old machinist from Tempe, a Phoenix suburb, who wore a black T-shirt with a neon scorpion on the front. “I love it.”

Brine, who came out with two friends, said it was fun to see scorpions in a different way. When he was growing up, his family considered them pests.

The hearty arthropods, which have roamed the earth for millions of years, can indeed be unwanted guests. Dozens of Phoenix companies offer to spray, kill and seal scorpions out of homes. Online ads include pictures of smiling and unsuspecting little children, and warnings that scorpions could even show up in your bed.

While scorpion stings hurt — experts say they are like a bee sting — they are rarely lethal, especially in the United States. A 2008 study, “Epidemiology of scorpionism: A global appraisal,” found that of about 1.2 million stings annually, 3,250, or 0.27%, resulted in death.

The highest risk areas are in parts of Africa, the Middle East, South India, Mexico and southern Latin America, and fatalities were often a result of a lack of anti-venom treatments, according to the study.

Esposito said that of about 2,500 species of scorpions worldwide, only 25 or so are truly dangerous. The most hazardous in the United States is found in Southwestern states: the Arizona bark scorpion, which is light brown and blends into the desert landscape.

While scorpions get a “bad rap,” they are an important indicator of the overall health of the ecosystems where they are found, said Esposito.

“If something is going wrong in an area, scorpions are a place to look” to understand what is going on, she said.

After an hour, our group had gathered about 25 scorpions. All were placed in a large plastic box, around the size of a home aquarium. Roberts, the ranger, identified three kinds we had captured: straight tail, yellow ground and giant hairy scorpions.

Watching them interact, I was awed by their ferocity. Several attacked each other, pinching and whipping their tails, while others tried in vain to climb out, slipping on the side of the box only to charge and continue trying.

My 8-year-old, Lucas, and a few other kids captured some moths and put them in the box. A few of the bigger scorpions, thrusting the smaller ones aside, circled the moths in preparation for consumption. And then something happened that made the group go silent: One of the larger scorpions devoured a small scorpion, thrusting its entire body into its mouth.

“Why didn’t he go for the moths?” shouted Lucas.

“Why go for moths,” Roberts joked, “when they can eat each other?”