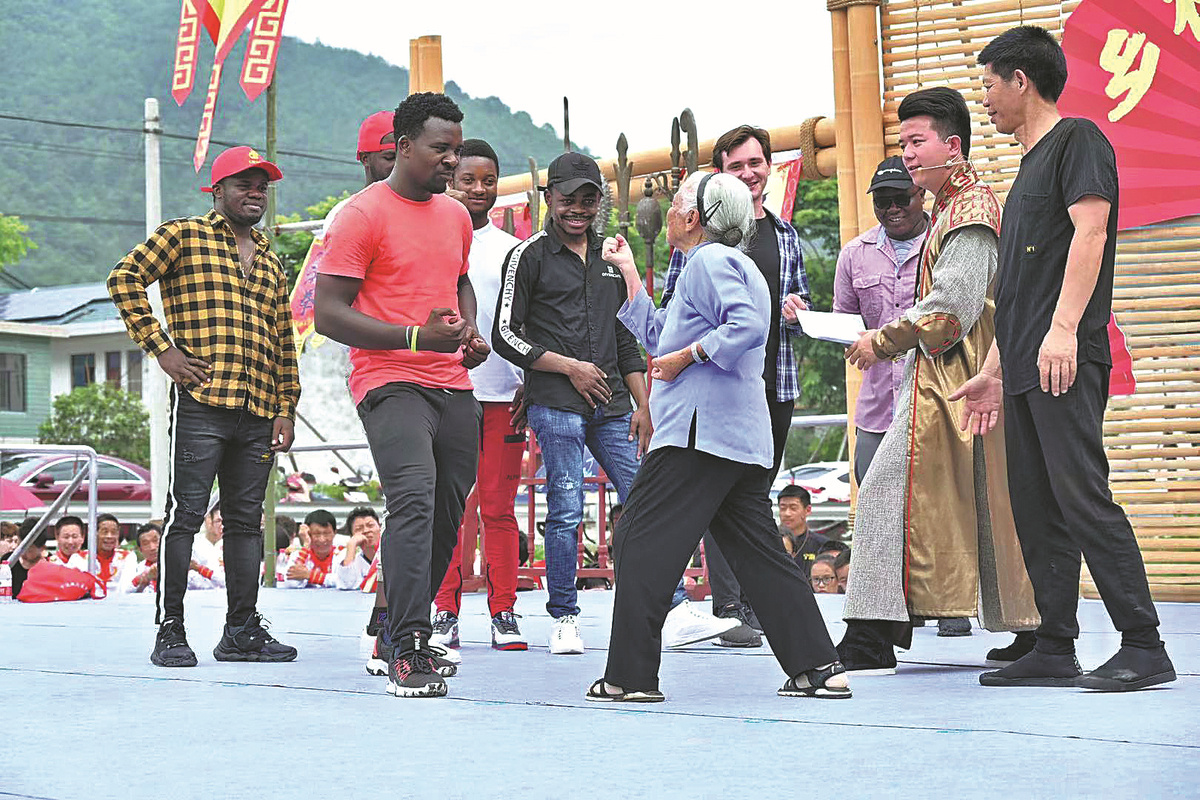 A video of an elderly Chinese woman demonstrating her martial arts skills at a recent local gathering has quickly become a hit on YouTube, where it was viewed over 440,000 times and given more than 4,500 likes.

Messages posted by admirers of the 98-year-old woman, known to fans as "kung fu grandma", include "I don't know if I will even be able to walk at 98" and "Perhaps kung fu is the key to her longevity."

Even Zhao Lijian, spokesman for the Ministry of Foreign Affairs, has taken notice, saying about the video on Twitter, "The kung fu spirit never gets old!"

"Kung fu grandma", whose real name is Zhang Hexian, had already established a reputation by 2017, although in nearly 10 decades she has never left her hometown, the village of Zhangkeng in Ninghai county, Zhejiang province. She speaks a local dialect but understands Mandarin.

After the video went viral on You-Tube, her niece told her, "Grandma, now you are famous not only in China but also abroad."

Zhang stands about 1.5 meters tall. Her kung fu movements are fluent and her steps steady.

Her village has had a long relationship with kung fu, and Zhang began learning at age 5 from her father, who was a sixth-generation inheritor of Zhang Boxing, a martial arts style found mainly in southern China.

"I started learning the basics: a firm stance. Use your hands to chop and push. Thrust with the palm," Zhang said. "I used to practice every day when I was young. Now I'm getting older and I have less strength than before, but I still have the vigor."

She hastened to add: "Kung fu is not for violence, but to protect ourselves and help others when necessary." Her spirit aligns with her father's desire to help others, she said.

Zhang, a warm-hearted, lifelong farmer, gets along well with her neighbors.

Feng Chuanyin, her youngest son, said: "My mother is always ready to help. She would help people who are about to get married in the village, doing needlework and cooking."

Zhang has three sons and a daughter, all of whom work in Ninghai county, which is about a 40-minute drive from the village. She has lived alone since 2012, when her husband died.

Her life is ordinary but well-organized.

She gets up at 5 in the morning, cooks three meals every day－seafood is her favorite－visits her friends and chats occasionally after lunch. In the afternoon, she practices kung fu.

Her children visit her up to five times a week, but she likes to do her own housework.

The village of Zhangkeng is surrounded by hills, and Zhang's house is on a hillside, so climbing is necessary when she goes out to shop for groceries or to visit friends. The steady exercise provided by climbing the hills could be responsible for her vigor.

"We asked her to live with us in town, but she enjoyed living on her own," Feng said of his mother. "It makes her feel free and comfortable."

"Kung fu grandma" has passed her father's style of Zhang Boxing down to her grandchildren, who come to her house on weekends and holidays.

Upon learning the news that a primary school in a neighboring town had set up a martial arts class recently, Zhang volunteered to coach the children and offers all the help she can.

Feng said his mother and family "want to pass down the spirit of kung fu to the younger generation, and hope it will help keep them healthy".