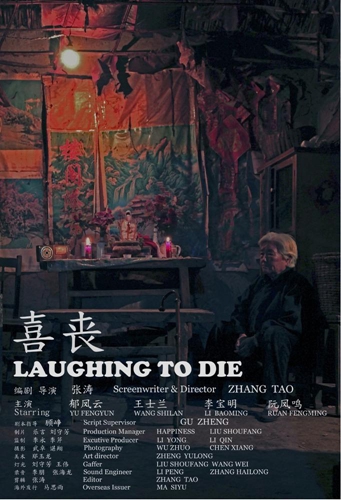 The news that a 79-year-old mother in Northwest China's Shannxi Province survived for days after being buried alive by her son in a graveyard has angered many Chinese people, who posted comments condemning the son, who was apparently trying to escape from having to take care of her.

This reminds me of the movie Laughing to Die, in which a mother commits suicide to avoid being a burden on her children. This 2015 independent movie directed by Zhang Tao still holds an 8.4/10 on Chinese media review site Douban - a high store for a film tackling social issues.

Filmed with a complete cast of amateur actors, the young director hoped to raise public awareness about the growing elderly population in rural areas in order to avoid the tragedy of the 80-something mother in the movie.

In the film, 86-year-old Madam Lin moves in with her children as she waits for a bed to become available at a nursing home.

Lin's nightmare unfolds as she passed along from one home to another among her six children, who see her as a burden due to their own bad living conditions. What is worse is that she suffers from an uncontrollable laughing disease due to a fall she takes at the beginning of the movie. When death and disaster befall her second daughter - who treated her fairly well - the mother ends up alienating her daughter when she breaks out in laughter at the news that her daughter has lost her only son.

After leaving all her "precious" belongings to her children, she commits suicide the night before she was due to move into the nursing home.

The film ends by hinting at the cyclical nature of such tragedies as the mother's daughter-in-law also gets hurt in a fall. It is sad to see such things happen in the film, but even sadder to see such incidents occur in real life. There are many things that we can do to prevent these types of tragedies from occurring in reality such as providing proper mental care, financial aid as well as affordable care services to the elderly.