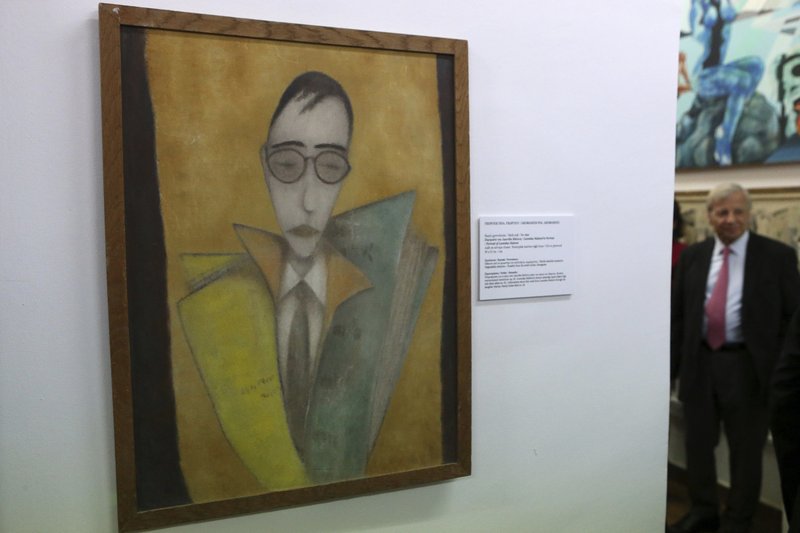 A view of a painting during an exhibition of culturally significant paintings that were recently exchanged as part of an effort to boost confidence between the ethnically divided island nation's two communities, at the Ledra Palace Hotel inside the UN controlled buffer zone in divided capital Nicosia, Cyprus, Monday, Feb. 3, 2020. (Photo: AP)

It took more than 45 years, but 219 paintings thought lost or stolen — artwork that includes some of the most significant works produced by Greek Cypriot artists — have gone on display.

One work by artist George P. Georghiou has been hailed as one of Cyprus’ “most iconic paintings.”

The oil-on-plywood painting encapsulates the Greek Cypriots’ armed uprising against British colonial rule during the latter half of the 1950s that culminated in the Mediterranean island’s independence. With the canvas crowded with distorted figures, the distinctive work evokes one of Pablo Picasso’s best-known paintings, “Guernica.”

“This is some of the most prized art in Cyprus and Greece,” said Yiannis Toumazis, an academic who serves on a committee tasked with using culture to build trust between ethnically divided Cyprus’ Greek and Turkish communities.

Officials say the paintings are of incalculable artistic value but some could carry price tags well into six figures.

A sample of the paintings were unveiled at an exhibit Monday at a disused hotel straddling the U.N-controlled buffer zone that cuts across the capital of Nicosia.

Greek Cypriot President Nicos Anastasiades and Mustafa Akinci, leader of the breakaway Turkish Cypriots, were on hand to launch the exhibit.

The works had languished in the basement of a cultural center in the breakaway Turkish Cypriot northern third of ethnically divided Cyprus.

They were put in storage there after being rounded up from private collections and public galleries after a 1974 Turkish invasion that was triggered by a coup aiming at union with Greece. Although Turkish Cypriots declared an independent state, only Turkey recognizes it.

But an agreement last year aimed at boosting trust between Cyprus’ Greek and Turkish speaking communities saw the paintings re-emerge.

“To see the paintings returned was one of the most sentimental moments of my life,” said Androula Vassiliou, the committee’s Greek Cypriot co-chair.

In return, Turkish Cypriots received rare archival footage from state broadcaster CyBC of Turkish Cypriot cultural and sporting events dating from 1955 to the early 1960s. The footage is a visual window to a past that had until recently lingered only in memory, said Turkish Cypriot committee co-chair Kani Kanol.

“The common language of art, which is universal, serves as a unifying force,” he said.

The exhibit was a bright spot amid prolonged uncertainty over whether moribund reunification talks for the island would be relaunched soon.

“Art and cultural activities can tangibly contribute to efforts of achieving peace and reconciliation,” said Anastasiades.