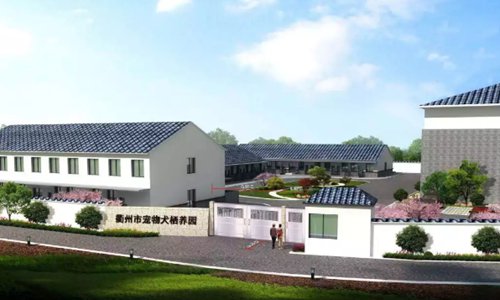 "We established this asylum because the previous one was only rented in a non-ideal location, and the environment was relatively simple and crude, which risked a plague outbreak," Li Kan, an employee at the local bureau of the Urban Management and Law Enforcement in Quzhou, told the Global Times on Sunday.

The new asylum has partly opened and adopted more than 100 homeless and unregistered  dogs as of Sunday, Li said.

With a total investment of 18.99 million yuan ($3 million), construction of the dog asylum began in August 2018 and was completed in April, Quzhou Evening reported.

It is equipped with a dining room, a washroom, and professional medical personnel to ensure the dogs' health.

It also provides adoption services and information on how to raise a dog, to help improve pet management and services in the city, Quzhou Evening reported.

Some reports said that 5G technology will be applied in the asylum to intelligently manage and take care of the dogs.

But Li denied the reports, saying that they currently have no such plan.

Some Chinese netizens criticized the local government for spending too much money on the dog asylum while there are still so many homeless people.

"How can the government spend 20 million just to build a dog asylum? There are still a lot of poor people in China. Did taxpayers agree to build the project?" one netizen asked on China's Twitter-like Sina Weibo.

In response to the criticism, Li said that it is normal for some people to oppose the project, and they will try their best to make the city better by gradually dealing with each problem.

Such an asylum exists in cities like Nanjing, capital of East China's Jiangsu Province, and Dalian, Northeast China's Liaoning Province.

They were established with an increasing problem of pet dog management in the country as more and more Chinese people have started to raise pet dogs but lack knowledge and public support to take care of them.

For example, there are more than 6,000 registered pet dogs in Quzhou, the bureau said on its official Wechat account in May.

The large number of dogs has caused various problems, including noisy barks, unclean environment of defecating feces, and an increasing number of abandoned dogs, which have received a lot of attention, according to the bureau.