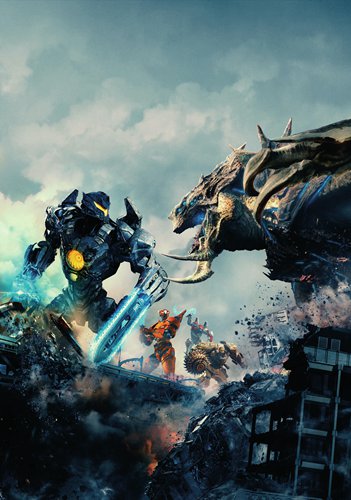 Legendary-Universal monster-fighting blockbuster Pacific Rim: Uprising is scheduled to open in China on Friday, a simultaneous release with the US.Set about a decade after the first movie Pacific Rim, the story sees the return of the Kaiju, huge monsters that rise from the bottom of the Pacific Ocean, and humanity's ongoing fight with them using Jaegers - gigantic robot fighters piloted by two or more humans whose minds are joined by a neural bridge.The series' first film debuted in the Chinese mainland in 2013, raking in some 694 million yuan ($109.6) to become the fifth highest earning film in the market that year and contributing around a quarter of its global box-office revenue.With this in mind, it's not quite surprising to see that the sequel has added some more Chinese elements in the hopes of grabbing a bigger piece of the pie in the world's second largest film market. Additionally, with the film being Legendary's third co-production after the company was bought by China's Wanda Group in 2016, the increased display of Chinese elements seems to be following a trend for the studio as its most recent blockbuster, The Great Wall took place entirely in China and Kong: Skull Island featured Chinese actress Jing Tian.

While the first film set part of its story in Hong Kong and featured a Chinese Jaeger named Crimson Typhoon whose Chinese pilots were played by Canadian Chinese triplets, many of the scenes in the new movie were filmed in Qingdao, East China's Shandong Province, while the cast has a total seven Chinese actors and actresses.

Natural fit"It really felt natural to set a large part of the action in China, since it involves the Pan-Pacific defense cause and China is such a huge part of the Pacific Rim," the film's director Steven S. DeKnight told the Global Times in an interview in Beijing on March 13.Skull Island's Jing Tian - who also starred in The Great Wall - plays Shao Liwen, a highly intelligent CEO of an international group who DeKnight described as "extremely smart, brilliant, not very good with people - really a Chinese tech billionaire." A 30-minute long preview of the film that was shown to media in Beijing earlier showed off the latest Jaegers and updated Kaiju fighting in cities in China under the command of a military officer played by Chinese actor Zhang Jin."I love the idea of including Chinese actors and actresses in this movie and made them a big part of the movie this time around," DeKnight noted. "Especially Jing Tian… the character is woven into the story so neatly."Moreover, the director specifically pointed out that he had most of the native speakers speak their native languages as much as possible in the film as "it really gives them an authentic flair."Talking about the film crew's one-month shoot in Qingdao, DeKnight was all praise for the location, calling it "an amazing, inspiring experience" that "elevated the movie and gave it that kind of international, cohesive world-coming-together feeling that you just wouldn't get with a cast from just the US or just Australia."Honoring the pastScott Eastwood, one of the film's leads, also talked about his time filming the movie in an interview in Beijing. "It's great to be part of a global film," Eastwood noted. "Also, growing up, I was a fan of monster films and a fan of Godzilla in particular, I still remembered when I watched the film or the first time at 10, so it's exciting to be a part of this monster universe."Deeply influenced by Japanese tokusatsu series Ultraman, DeKnight said that although he loves the first movie directed by Guillermo del Toro, he is trying to offer audiences a different experience by renewing the design of the monsters and robotic fighters as well as setting most of the action scenes during the daytime - a huge difference from the previous film, whose action scenes mainly took place at night."While still have the Jaegers-Kaiju action that made the first movie thrilling, I just didn't want to repeat the first movie," DeKnight said, admitting the daytime fight scenes were an incredible challenge for the visual effect companies since details can be easily seen. "I think it's refreshing and cool to see these fights during the day and honestly it's what I grew up watching in movies and TV… the men in suits and giant monsters battles, they were almost always in the day, and I really wanted to honor that."