‘Respect them’: Even in wealthy areas, food bank demand high 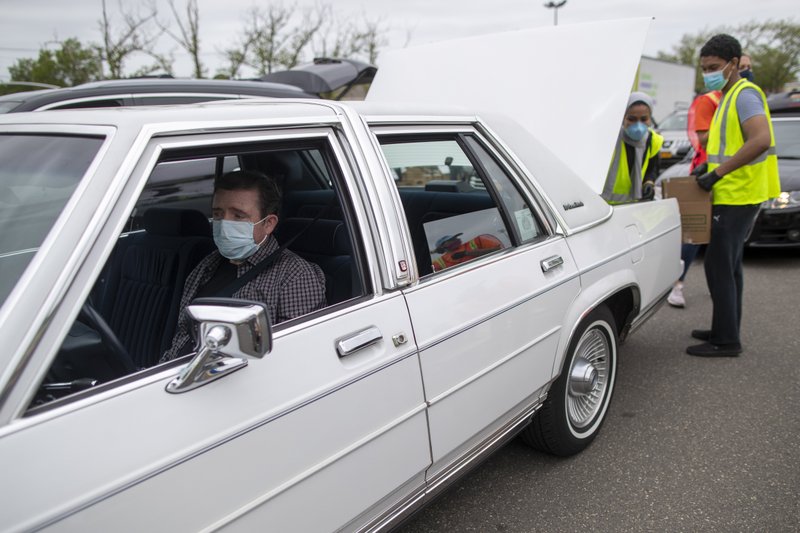 In this Thursday, May 28, 2020, photo, Tom Cummings waits in his car as volunteers place groceries in the trunk during a food distribution drive sponsored by Island Harvest Food Bank in Valley Stream, N.Y. The Valley Stream stream donations were just one of many events Island Harvest has conducted throughout the area recently. (Photo: AP)

One was a nurse, another a retiree. Others had recently lost jobs with an insurance company and a country club.

On a humid day last week, in the parking lot of this Long Island town’s largest park, they had a common bond. Each was making their first visit to a food bank to help cope with hardships arising from the coronavirus outbreak.

“I’m hungry. That’s why I’m here,” said Marcia Duckley, a mother of four children ages 4 through 17 who lost her hotel job this year. “It never crossed my mind before that I’d be doing this.”

Duckley, who came to the United States 30 years ago from Jamaica, said she has recently been feeding her children meals of flour dumplings with butter – plus an occasional treat of water flavored with sugar.

“They say, ‘Mom, when are you going back to work?’” she said through an open window as she edged her car slowly forward.

The scene in Valley Stream, a community of 37,000 in the Nassau County suburbs just east of New York City, has been replicated nationwide during a 10-week stretch in which 42 million Americans have applied for unemployment benefits. Long lines of cars, sometimes numbering in the thousands, backed up while their occupants wait — sometimes for hours — for the chance to take home a free batch of food.

Island Harvest, one of the major food banks on Long Island, organized the food distribution in Valley Stream, one of many it has conducted throughout the area.

In Valley Stream, she said, 1,124 boxes of food were distributed by volunteers, mostly to motorists, but also to several hundred people who came on foot. Each box contained roughly 25 pounds of milk, potatoes, apples, cheese and other produce.

“There are a lot of people who’ve never asked for food before -- some used to contribute to us,” she said. “It’s a very humbling experience for them.”

Dresner noted that some cars in the long line were new, upscale models — and that it would wrong to second-guess their occupants’ needs.

“Maybe a few weeks ago they had a great job,” she said. “Then the world is taken from underneath them and they have no income -- they’re struggling to pay the mortgage and the car loan.”

“It’s not up to us to judge the type of car that comes though the line, or the way people are dressed,” she added. “It’s up to us to respect them.”

The first woman waiting in the pedestrian line was indeed well dressed. She asked to be identified only as Maria G. and said she had been furloughed during the pandemic by the insurance company where she’d been an underwriter for 20 years.

She is a single mom living with four sons ages 15 to 20 who are “eating me out of house and home,” she said.

“I’ve never been through something like this,” she said. “I’ve seen it in Third World countries, and now it’s hit Valley Stream.”

Not far behind her was retiree Sheila Barron, 69, who said she was making her first trip to a food bank because of increasing wariness of grocery stores. They’re too crowded, she said, and often are out of items she needs.

The pandemic restrictions have been tough for her. She’s missed the opportunity to go to church and is asked to do medical appointments via telemedicine.

Barron was soon followed by Tina Grace, 29, walking alongside her bicycle, who said she was recently laid off by the country club where she worked on event planning. She’s getting unemployment compensation but worries it won’t last.

“I’m just taking it day by day,” she said. “It’s hard. It sucks. Everyone is in a tough situation right now.”

Unlike many others in line, Mary Blaize is still employed — she’s a nurse in New York City. The stress of her job is now compounded by her husband’s recent layoff, she said, making it harder to pay their mortgage and utility bills.

But she was upbeat about her first visit to a food bank.

“It feels good to know that people actually care,” she said.

In neighboring Connecticut, perennially ranked as one of the richest states, demand on food banks has also been intense.

Each weekday outside a football stadium in East Hartford, 1,000 to 2,500 cars roll through a distribution site run by the regional food bank, Foodshare. Drivers have their trunks open as volunteers load boxes of fruits and vegetables, bread, milk and even toys.

Among those making use of the site was Natalie Townsend, 32, a single mother from Hartford who lost her job at a call center in April. She said she has fallen two months behind on her rent, is still waiting for unemployment benefits and worries about how to care for her 9-year-old daughter.

“It definitely gets me down because I like to pay my bills on time,” she said. “I don’t want to be on the streets.”

Also at the site were Yanet Belossantos and her husband, Alex Cepeda, who lost their jobs in March, she as a medical assistant, he as a chef. The Dominican Republic immigrants live in Hartford with her mother, who has Alzheimer’s disease.

They have been surviving on unemployment benefits but are behind in their bills.

“We can’t go grocery shopping because we don’t have the money,” Belossantos said. “This is really helping us.”

In the mostly affluent southwest corner of Connecticut, Kate Lombardo says demand is up by about 40% in recent weeks for the Stamford-based Food Bank of Lower Fairfield County, of which she is executive director.

Lombardo says her own family in Brooklyn faced sudden hardship in the 1960s, including losing their house, after her father died and her mother had to care for five children. She said that experience deepens her empathy with people now facing their first-ever need for food assistance.

“Suddenly you feel like you’ve been transported to a different country,” Lombardo said. “You never used these resources before. You don’t know how to find them. It’s like Dorothy trying to find the Wizard of Oz.”

Lifelong Stamford resident Juledah Wilson -- in addition to her job as a paraeducator in the public school system – has for many years helped run one of the neighborhood food pantries supplied by the food bank.

But Wilson has been out of work since March; so are the two adult children who live with her, along with two grandchildren. Wilson recently designated herself and her family as recipients of aid from that very pantry in order to obtain meat, bread and fresh vegetables.

“I grew up with a lot of brothers and sisters,” she said. “I learned how to make do with what you have -- try to survive.”

Throughout her community, anxiety is high as food supplies grow tighter.

“A lot of people are very nervous,” Wilson said. “We don’t know where we’re headed. It’s kind of scary.”