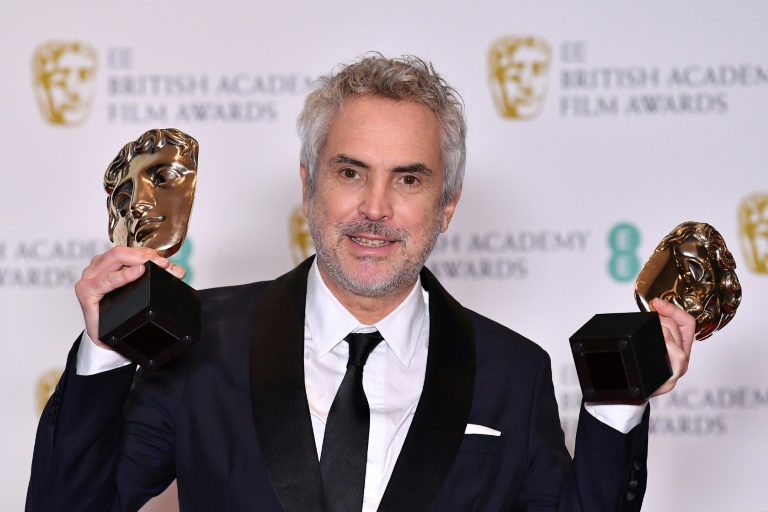 Bafta-winning 'Roma' is a cinematic love letter to director Alfonso Cuaron's childhood in Mexico City in the 1970s. (Photo: AFP)

Netflix black-and-white production "Roma" triumphed at the Bafta film awards, boosting Oscar hopes for the US streaming giant whose rise poses a serious challenge to the conventional Hollywood business model.

"I'm seriously touched this film has been received the way it's been received," Cuaron said at a star-studded ceremony on Sunday in London's Royal Albert Hall, also attended by Prince William and his wife Kate.

Cuaron thanked Netflix for "having the courage" to get behind his film as he picked up the gong, adding that its success "in an age where fear and anger are proposed to divide us means the world to me".

Netflix UK tweeted its congratulations, saying it was a "deeply moving film and deserves all the love it's getting".

It dented expectations of a clean sweep by "The Favourite" which picked up best actress for Olivia Colman as Queen Anne and best supporting actress for Rachel Weisz playing her confidante and lover.

The film, about a cantankerous 18th-century British queen and her scheming court, had been nominated for 12 awards and picked up seven in what Colman described as an "amazing night" for the cast.

"This is for all three of us. It's got my name on it but we can scratch on some other ones," she said on stage, also referring to co-star Emma Stone who was nominated in the same category as Weisz.

Colman, 45, was up against Glenn Close ("The Wife") and Lady Gaga ("A Star is Born") -- the same power duo she will face at the Oscars on February 24, with Close so far the clear frontrunner.

"She doesn't take herself too seriously and she enjoys what she's doing," Greek director Yorgos Lanthimos said of Colman.

Weisz and Stone are also in the running for Oscars in a proud year for the British film industry.

"Roma" is up for best picture at the Oscars -- Netflix's first-ever nomination which has propelled it into the Hollywood club of elite filmmakers.

While the online service has gradually been welcomed at most major film festivals, Tinseltown's red carpet is not fully rolled out, with cinemas up in arms about its position as a distribution king attracting A-list stars.

After the Oscar nominations were announced, theatre mega-chains AMC and Regal -- the top two in America by far -- said "Roma" would not be screened in their annual best-picture showcases.

In all, "Roma" was shown in around 900 theatres worldwide -- more than any other Netflix film, but far short of a usual big release. Netflix never released any box office data.

While Netflix has made some good-faith efforts to gain Hollywood's acceptance, it only waited three weeks after the theatre release of "Roma" to make it available on its platform, far less than the 90 days that cinema owners ask studios to hold back.

The 2019 edition has also been tinged by scandal.

That referred to an article in US magazine The Atlantic detailing sexual misconduct allegations that included underage sex.

Singer denies the story and the film itself was still up for the award, although it failed to win.

Rami Malek's portrayal of the late Queen frontman Freddie Mercury -- a victim of the AIDS epidemic in the days when homosexuality was taboo in rock-and-roll -- earned him the best actor award, however.

After winning he paid tribute to Mercury as "the greatest outsider of them all".

Having seen off Christian Bale's transformation into former US vice-president Dick Cheney in "Vice", Malek's victory may boost his chances at the Oscars.

The two are both in the running for best actor, with Bradley Cooper also nominated for "A Star is Born" in an increasingly tight race as final voting opens Tuesday and closes February 19.

Best supporting actor at the Baftas went to Mahershala Ali for "Green Book", a comedy-drama in which he plays a jazz pianist on a tour of America's Deep South in 1962.

"Free Solo" -- a film about the first person to climb El Capitan in Yosemite National Park without ropes -- won the award for best documentary.

Among the glitzy crowd there was one star missing -- Lady Gaga, who won the best original music award for "A Star is Born", was instead performing at the Grammys in Los Angeles, where she picked up three gongs.