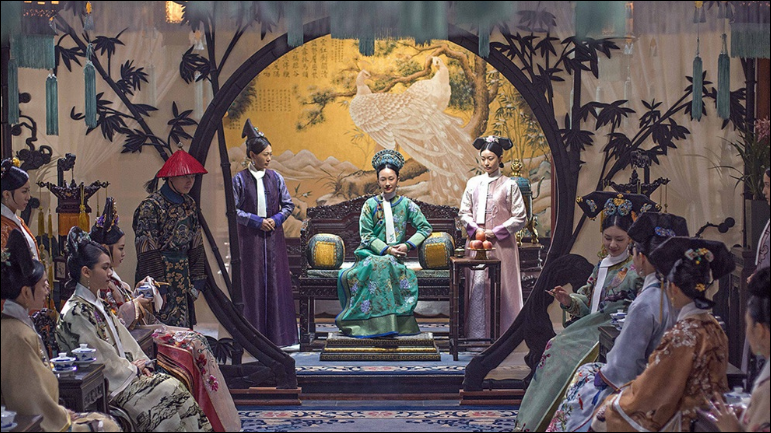 The 87-episode historical TV drama “Ruyi's Royal Love in the Palace” has its finale aired this month. The story is set in the reign of Emperor Qianlong (1735-1796), but it refreshes viewers' stereotypical expressions of Chinese royal harem drama.

As the sequel to the critically acclaimed drama “Empresses in the Palace,” which featured the triumphant progresses of one of Emperor Yongzheng's concubines, “Ruyi's Royal Love” is centered on an unsuccessful romance between Ulanara Ruyi, the step-empress (played by Zhou Xun), and Emperor Qianlong, Yongzheng's son and accession (played by Wallace Huo, widely known as Huo Jianhua).

The tragic denouement of “Ruyi's Royal Love” has got mixed responses from viewers when many believe that with its unique narrative settings, this TV drama is at least not worse than the preceding one.

A story of ingenuity

“Ruyi's Royal Love in the Palace” is adapted from the novel with the same name by Liu Lianzi, who is also the author of the bestseller novel “Empresses in the Palace.” However, the two stories differ very much.

While “Empresses in the Palace,” as well as most other Chinese historical TV romances, portrays how a female protagonist manages to defeat other consorts and ascend to the highest rank of a consort in the imperial harem, Ruyi, the heroine of “Ruyi's Royal Love,” fails to do so and even is abhorred by her husband in the end of the show.

“The unconventional and anti-climax story of ‘Ruyi's Royal Love' is an innovation and experiment;” said Huang Lan, the drama's producer. “We attempted to wipe off all the existing patterns of treacherous harem games in order to create a kind of experience totally new for viewers.”

“Ruyi is a loser in a harem story,” said Wang Jun, the drama's director, “but she has a free soul. What she always yearns is freedom, and she does liberate herself at the price of death in the end.”

Director Wang also thought that such a character made a better heroine because Ruyi achieved a sort of spiritual subversion and victory by breaking off all her relations with the Forbidden City.

The whole story is inspired by a blank page in the history of the Qing Dynasty (1644-1911). Ruyi's prototype is the second empress of Emperor Qianlong, namely Hoifa-Nara, whose abruptly incurring the Emperor's disfavor and abnormal lack of recordings in Qing-dynasty's official historical documents remain a mystery.

What can be sure is that Hoifa-Nara's cutting her hair infuriated Emperor Qianlong because such an action was considered a severe faux pas and gesture to curse the Emperor and Empress Dowager.

In the TV drama, Ruyi cuts her hair in memory of her lost love with Emperor Qianlong. Director Wang claimed that the show could be seen as a discussion about the besieged fortress of marriage, or even the predicament of humanity in a highly feudalist context.

To some extent, the marriage between Ulanara Ruyi and Emperor Qianlong resembles modern ones, since it is not an arranged one. The royal couple had been each other's childhood sweethearts, and they finally got married despite Qianlong's parents' intense opposition. Nonetheless, their relationship deteriorates in the inner court full of cunnings and hypocrisies.

Even if Ruyi did become the step-empress and once received the outshining love from Emperor Qianlong, she falls through and nearly was repudiated in the end.

Response to the drama was mixed, with various feedbacks highlighting the laudable performances and the affecting ending.

A large proportion of the drama's viewership is boosted by the fans of “Empresses in the Palace,” but many people feel underwhelmed by the unaggressive heroine.

“The heroine has not got ready to face off the villain consorts even in the second half of the drama,” @Charcuterie–Seven whined on Douban, a show review platform in China.

“There are many defects in the character designs of Qianlong and Ruyi.” @SEANNNNAES made a statement that the character of Ruyi is much less convincing than the heroine in "Empresses in the Palace."

“The script is mediocre, and the performance makes it more like a modern drama,” commented @Li Awa from Douban.

@NiyiningCookies posted on Weibo that “I'm satisfied only by the last episode (of “Ruyi's Royal Love”) when Qianlong pines after his deceased love with the lock of her hair in his hand. However, the first 86 episodes are far below my expectations.”

Meanwhile, @Thisismeow7, another Weibo user, refused @NiyiningCookies by highlighting some clues in the first two episodes that have foreshadowed the impending downfall of the step-empress.

“The show becomes more and more heart-tugging as the story goes deep,” said Zhang Hanyue, a writer and critic. “When you abandon all the expectations for a battle-of-the-palace drama, you will found the show reveals the fragility and hollowness of a marriage.”

Vogue magazine commented that the TV show actually recorded “the failure of a high-end girl” because what Ruyi had been pursuing was spiritual connections with her spouse. In Vogue's opinion, such a pursuit represents the taste and ideal of the modern middle class.

Many viewers agree that Ruyi bears many characteristics of a modern female.

“Ruyi was first illuminated when she talked with Giuseppe Castiglione (an Italian artist at the imperial court), who told her about monogamy in the western world,” said @Holidaynnn on Weibo. “From then on, in Ruyi's heart, love should be equal and unadulterated.”

If you shine a light onto an object, parts of the object may remain hidden in shadow, but when the light is cast from another direction, or multiple light sources are employed, more about the thing will be revealed.

“Ruyi's Royal Love in the Palace” may not be the best and most popular historical drama in the last few years, but there is no doubt that it introduces a new light to the neglected aspects of women's lives in the Forbidden City.