Dwayne "The Rock" Johnson's disaster flick Skyscraper overtook Dying to Survive - the Chinese hit black comedy-drama that was on top for two consecutive weeks - to top the Chinese weekend box office with more than 327 million yuan ($48 million) after its Friday premiere. 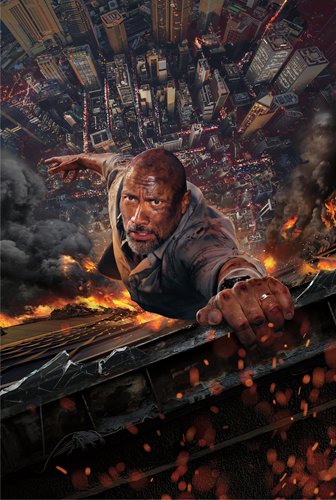 Featuring a story about a former FBI agent (Johnson) who goes to great lengths to save his family from a burning tower in Hong Kong, the film in China has far outperformed its showing in North America.

Premiering in the US on July 13, the film opened to $24 million and collected a mere $11 million during its second weekend. With its global box-office revenue adding up to $179.6 million this weekend, China alone accounts for nearly one-third of the film's global share.

Now holding a mediocre 6.6/10 and 7/10 respectively on Chinese review platforms Douban and Mtime, the film has been praised by some Chinese movie fans as "a Hollywood action film with Hong Kong crime thriller elements."

The film showcases how the Rock's huge popularity in China has helped boost the star's box-office power in the country.

Rampage, for instance, pocketed a total of 1 billion yuan when it debuted in China in April to become the fourth imported film in China to do so this year following Avengers: Infinity War, Jurassic World: Fallen Kingdom and Ready Player One.

His Jumanji: Welcome to the Jungle currently ranks at No.21 on the 2018 Chinese mainland box-office chart with a nearly 500 million yuan take, standing side by side with Tomb Raider (497 million yuan) and hit Chinese documentary Amazing China (480 million yuan).

With the characters he has portrayed in films imported into China in recent years, the WWE champion-turned-actor has been dubbed by Chinese movie fans as "a male hormonal hurricane" and "a man of iron with soft feelings."

In keeping with his title of being "Chinese movie fans' old friend," The Rock came to the Chinese mainland in early July, his third trip this year, to promote his film. Showing off his muscles as well as some newly-learned Chinese phrases, the Hollywood star is clearly becoming more and more at home with the Chinese market, according to Chinese media reports.

Following Skyscraper on the weekend box office chart is Chinese hit film Dying to Survive with 183 million yuan. The film focuses on the import of generic drugs from India to China. Premiering in the Chinese mainland on July 5, the critically-acclaimed black comedy has sparked heated discussions in China surrounding the price of anticancer drugs. Now sitting at a total of 2.7 billion yuan to rank third on the annual chart, the film is very likely to break 3 billion yuan soon.

Grabbing 74 million yuan, Jiang Wen's film Hidden Man slipped from second place to No.3 on the chart this week. Set in the 1930s, the action drama follows a young Chinese martial arts practitioner who is trained in the US as a secret agent and comes back to China to take revenge on the men who murdered his teacher 15 years before.