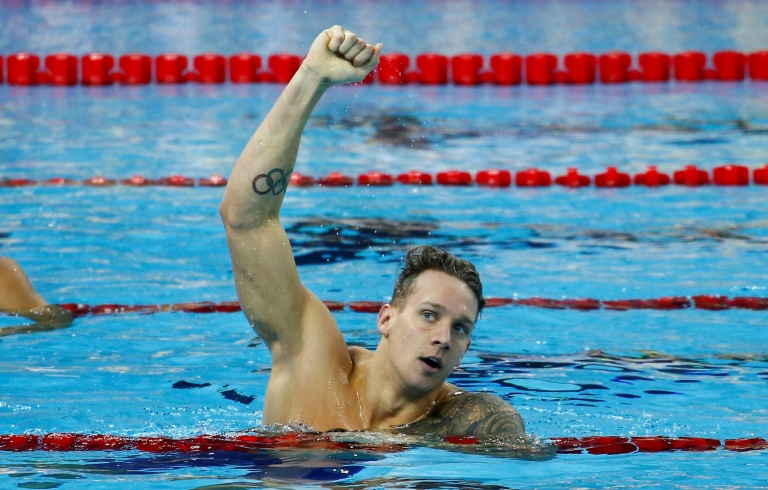 Caeleb Dressel of the USA recorded a thrilling victory in the 100m freestyle at the short course World Championships (Photo: AFP)

The 22-year-old Dressel has drawn lofty comparisons with American swim legend Michael Phelps but he left it to the last few strokes to pinch a thrilling victory in a US record 45.62secs in the Chinese city of Hangzhou.

Dressel does not like the Phelps comparisons, which came about last year after he became only the second swimmer after his decorated compatriot to win seven golds at a single long course world championships.

Dressel did not have it all his own way in Hangzhou, however, having to settle for silver in the 50m freestyle -- behind Russian rival Morozov -- and in the 100m butterfly.

He got his revenge on Sunday, the last day of competition, recovering from third place at the 50m mark to bring the United States their 13th gold medal and confirm their dominance in the 25m pool.

Dressel said that he was "sloppy" at times during the championship, even though he goes home with nine medals.

"I feel like I got better as the meet went on because that (the 100m freestyle) was faster than the first day of the meet so I think I was getting better every day," said the Florida native.

"The speed was not quite there, but like I said, I think I’m in really good shape."

Annie Lazor made it a 14th gold for Team USA by winning the women's 200m breaststroke and it was soon 15 thanks to Kelsi Dahlia in the women's 100m butterfly.

Dressel then produced a lightning third leg in the 4x100m medley relay to haul the US men to another gold -- America's 16th of the meeting -- with Russia in silver.

The Russians got their own back on their old foes in the men's 200m backstroke as Evgeny Rylov grabbed the lead late on to stun Ryan Murphy.

Rylov clocked a winning time of 1:47.02, 0.32 secs ahead of Murphy, the reigning double Olympic champion.

Cameron van der Burgh, the 30-year-old South African, signed off in style with victory in the men's 50m breaststroke.

It was a second gold to go with the one he won in the 100m breaststroke, after which he had announced that he would be retiring from swimming following the Hangzhou showpiece.

The Americans got Sunday's session off to a bang by triumphing in the women's 4x50m freestyle in a championships-record 1:34.03.

And they ended it in much the same way, their women's 4x100m medley relay team forcing another championships-record time for a 17th and final gold medal.

Russia were the nearest challengers to the US, winning six golds overall.