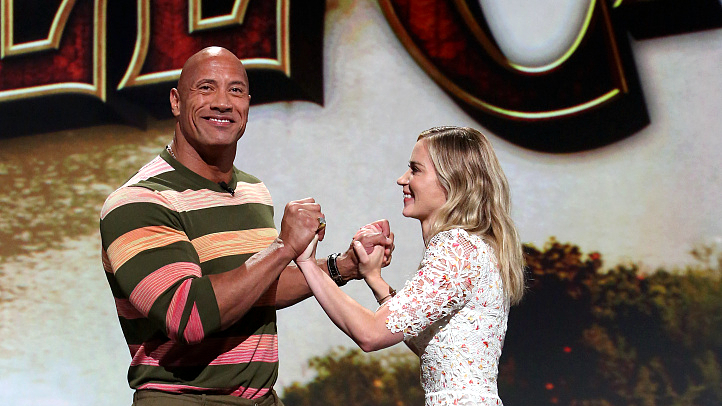 The movie is the ninth installment in the space saga started 40 years ago by George Lucas. It debuts in theaters in December.

“It’s kind of hard for me to understand the story is ending, but what an ending!” Anthony Daniels, who plays C-3PO, said onstage surrounded by cast members and droids R2-D2 and BB-8.

The color of Rey’s lightsaber was a surprise because red is typically used in the galaxy far, far away only by characters on the Dark Side. Ridley offered little explanation.

“It’s the clearest indication that there’s a big old emotional story arc happening,” the actress said in an interview.

Disney is dominating movie box offices this year, generating more than 8 billion US dollars in ticket sales from “Avengers: Endgame,” “The Lion King” and other mega-hits.

Saturday’s presentation looked to the future and featured a parade of Hollywood’s biggest stars.

Dwayne Johnson made his entrance on a makeshift boat to promote “Jungle Cruise,” an action-adventure movie based on the Disney theme park ride. Johnson said the film was modeled after films such as the “Indiana Jones” series and “Romancing the Stone.”

Like those movies, “Jungle Cruise” tells the story “heroic men kicking ass and saving the girl,” Johnson dead-panned, prompting co-star Emily Blunt to come out in protest and introduce clips of her character jumping out a window and needing no assistance.

In addition, Disney revealed scenes from Marvel movie “Black Widow” and a live-action re-telling of “Mulan.”

Angelina Jolie came on stage to talk about “Maleficent: Mistress of Evil,” and announced “Game of Thrones” star Kit Harington was joining the cast of superhero flick “The Eternals,” which also stars Jolie.

"Spider-Man" actor Tom Holland drew a raucous cheer as he appeared to promote new Pixar film "Onward," just days after it emerged his web-slinging superhero could disappear from the Disney-owned Marvel movie universe due to a row between rival studios.

"Everyone listen, it's been a crazy week. I want you to know that I'm grateful from the bottom of my heart and I love you 3000," he said, borrowing a phrase from the Marvel films' "Iron Man" character, in his first public comment on the split.

Extensive footage from "Onward," set in a fantasy world where magic has been replaced with humdrum, modern-day realities, showed brothers Ian (Holland) and Barley (Chris Pratt) on a botched quest to bring back their dead father with an obscure spell.

It was one of two Pixar originals on display, with Jamie Foxx and Tina Fey announced as the lead voices of metaphysical jazz adventure "Soul."

Prominent musicians including Jon Batiste and Nine Inch Nails' Trent Reznor and Atticus Ross will feature in the film, where souls are trained at an otherworldly "You Seminar" before being dispatched to Earth.

From Disney's own animated studio, the first footage was shown of fantasy "Raya and the Last Dragon," which sees a young girl seeking the help of a dragon to fend off sinister forces invading a fictional, Southeast Asian-inspired world.

The filmmakers said they had toured Thailand, Cambodia, Laos and Vietnam during research for the film, which will feature Awkwafina as the voice of a shape-shifting dragon.

Marvel Studios boss Kevin Feige followed up his detailed Comic-Con presentation last month on upcoming superhero movies by confirming Saturday that a "Black Panther" sequel will be released on May 2022.

Returning director Ryan Coogler appeared on stage, but teased the crowd by refusing to share any details of the sequel to the only Marvel superhero film to earn an Academy Award nomination for best picture.

Elsewhere in the most successful film franchise of all time, it was announced that "Game of Thrones" star Kit Harington will join a star-studded lineup for "The Eternals," due out in November next year.

The presentation was rounded off with footage from "Frozen II," the highly anticipated sequel to Disney's 2013 musical animation.

Original songwriters Kristen Anderson-Lopez and Bobby Lopez, who penned Oscar-winning smash hit "Let It Go," will return for the film, which explores heroine Elsa's past.