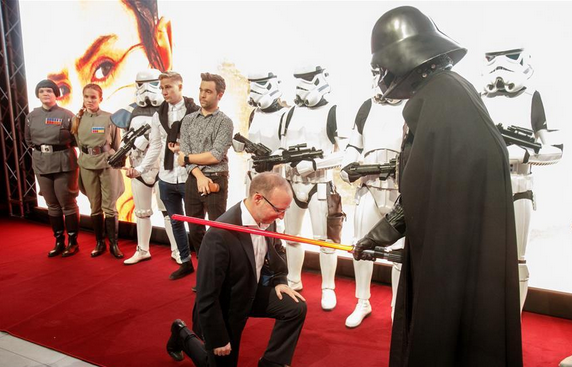 LOS ANGELES, Dec. 22 (Xinhua) -- Disney and Lucasfilm's "Star Wars: The Rise of Skywalker" dominated the weekend's box office with force, debuting with a massive 175.5 million U.S. dollars in North America for a global cume of 373.5 million dollars, according to studio figures collected by measurement firm Comscore.

The ticket sales of "Star Wars: The Rise of Skywalker" in opening weekend is far behind its trilogy predecessors. "The Force Awakens" and "The Last Jedi" brought in 248 million dollars and 220 million dollars in opening weekend in North America respectively. But the debut of the latest Star Wars film is still the third biggest of 2019 in North America, after only "Avengers: Endgame" and "The Lion King," and the 3rd biggest December opening ever.

It's also the 7th Disney release of the year to post an opening weekend over 100 million dollars in North America. Seemingly an unstoppable entertainment juggernaut, Disney has already powered past a world cume milestone of 10 billion U.S. dollars for 2019 with a record breaking six films being inducted into coveted Billion Dollar Club in a single year.

"'The Rise of Skywalker' had much to live up to with the previous two films setting an incredibly high bar in terms of both box-office and critical reviews," said Paul Dergarabedian, Senior Media Analyst at comScore.

"Though this film did not enjoy the opening weekend success of 'The Last Jedi' and 'The Force Awakens,' a 175.5-million-dollar North American debut and 373.5-million-dollar globally shows that people around the world still love the Star Wars brand, characters and mythology and the potential is certainly there for the film to eventually earn 1 billion dollars worldwide," he told Xinhua.