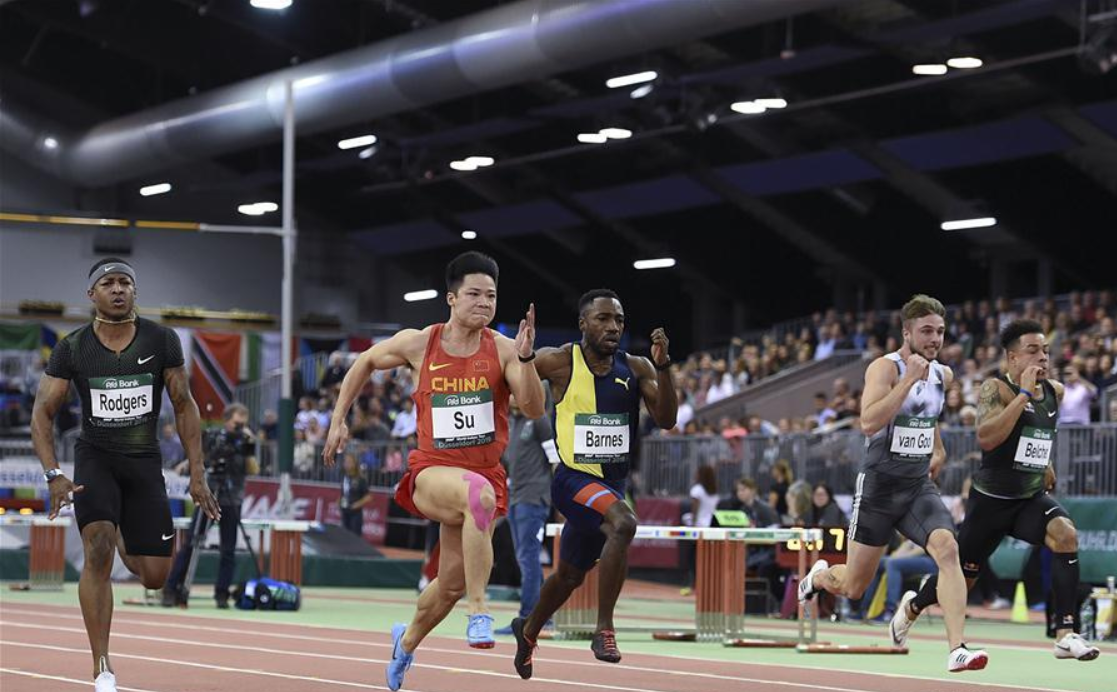 BEIJING, Feb. 24 (Xinhua) -- With three victories out of as many events, with the top two world leading 60-meter results under his belt, Su Bingtian's build up for the 2019 outdoor season has been remarkable.

With both the 100-meter Asian record and 60m continental indoor record to his name as well as numerous national and international titles to his name, the 'Su-per' fast Chinese sprinter has already set his eyes on a new target - becoming the first Asian to break through the 9.90-second barrier.

"For now my aim is to run under 9.90s," said Su, who believes that the Chinese 100m national record can be cut to around 9.85s one day in the foreseeable future, even if he might not be able to achieve such a goal himself.

"It would be difficult for me to go sub-9.90. But it is possible. I need to be in my best shape and also need to wait for the right time, the right place as well as the right weather conditions. This will be my primary goal in the next one or two years," the fastest man in the world's most populous country said.

There might be great difficulties ahead, but the determined Su is ready to give it his all.

Born in a small village in China's southeastern province of Guangdong in 1989, the hometown of many of the country's top-level sprinters in different generations, Su showed a great talent, along with explosive and elastic strength, at an early age.

He was selected for the provincial team at the age of 17 and started to train under the guidance of his former coach Yuan Guoqiang, who set China's first national record in the digital timing era of 10.52.

As Yuan and Su are both from Guangdong and both speak Cantonese, a dialect Su tends to use when communicating with his family and local peers, the same cultural background and smooth communication led to a quick chemistry between the two. He improved his personal best by 0.31 seconds in three years since 2006 and won in 11 tournaments including the Asian Indoor Games and the East Asian Games in what was only his first year as a senior athlete in 2009.

He broke the national indoor record for the first time in 2011 and went on to smash the 13-year-long 100m national record by clocking 10.16s at the National Championships in April of that year. In the following year, Su became the first Chinese to reach the 100m semifinals at the Olympic Games in London.

The year of 2013 turned out to be a major setback for Su. Although he managed to better his PB to 10.06s, he lost his national record to Zhang Peimeng, who dashed to 10.00s in the semifinal round of the World Championships in Moscow to grab the limelight and went on to beat Su in the 100m at the National Games in September.

The rivalry between Zhang and him spurred Su to make a bold technique change after the 2014 season. He changed his way of starting by using his left foot, instead of the right foot he had used since the very beginning of his career.

The gamble paid off.

On May 30, 2015, Su sprinted to a national record of 9.99s at the IAAF Diamond League Eugene meeting, ending generations of wait to become the first Chinese to go sub-10 seconds.

Three months later, he clocked 9.99s once again. This time he accomplished the feat on his home soil in front of some 80,000 jubilant spectators in the country's iconic Bird's Nest stadium en route to becoming the first Asian sprinter ever to reach the 100m final at the IAAF World Championships.

Paced by the in-form Su, the Chinese 4x100m relay team also notched a landmark silver medal at the 2015 Worlds in Beijing. Since the relay final was staged on August 29, Su's 26th birthday, the Happy Birthday song rose from the packed stands turning the Chinese sprinters' victorious march around the track into a grand birthday party.

"It was the most memorable birthday of my life. I never thought I would hear so many people singing the birthday song to me. This is the moment of a lifetime," Su said.

Many assumed that the 2015 Worlds in Beijing were the peak of Su's career.

But three years later, the hard-working and self-disciplined Su got off to a fantastic season start to prove that he is only just beginning.

Even now, Su can still clearly remember the day when he waved goodbye to his new wife and left his hometown to start his winter training in preparation for the 2018 season.

"It was November 27, 2017. I just ended my honeymoon and flew back to Beijing all by myself," he recalled. "I went to Europe for the indoor season two months later and were not able to stay with my family during the Spring Festival."

The sweat shed in the winter was not in vain. Su clocked 6.55s in his first 60m race in Berlin and went on to clocked 6.47s one week later in Karlsruhe, beating his own Asian indoor record by 0.03s.

After another three days, he further improved it to 6.43 in Dusseldorf.

"To be honest, I did not expect such good form so early in the season. Before I flew to Europe, I only clocked 6.66s in my last test race. I enrolled in so many indoor races because I wanted to fine-tune my form before the World Indoor Championships," Su said.

He did save his best form for the Indoor Worlds.

In Birmingham, Su blazed to an Asian record of 6.42s to take the silver medal, becoming the first Chinese sprinter to snatch a world indoor medal in his fourth appearance in the bi-yearly event.

"I was always so close to a medal in recent championships and finally I got one," Su said. "Actually I thought that I could win a bronze. There is no difference between silver and bronze. Even a bronze could prove that Chinese sprinters have made a breakthrough in major world competitions."

On June 22, he trimmed 0.08s off his PB to claim the title at the IAAF World Challenge Meeting in Madrid in 9.91s, shattering the national record of 9.97s that was just set three days ago by his relay teammate Xie Zhenye, 200m gold medalist at the 2010 Youth Olympic Games, while tying the continental record set by Nigeria-born Qatari Femi Ogunode in 2016.

One week later, the soaring Chinese sprinted to 9.91s once again at the Paris leg of the IAAF Diamond League, and came close to that mark at August's Asian Games in Jakarta, where he clocked 9.92s to wrap up the bumper season of 2018.

"It is really a miraculous and amazing year for me, the most memorable one in my career," the 29-year-old said. "I achieved a series of good results, and most importantly, I made these results competing with the best sprinters in the world, which was quite a boost to my confidence."

A more confident Su only chose three indoor races to test the effect of his winter training this year and proved he is still at his peak.

Four days after his season-opening win in Athlone, Ireland, where he clocked 6.52s on February 13, he set a world leading time of 6.47s in Birmingham and took the top honors at the final stop of the 2019 IAAF World Indoor Tour in Dusseldorf, Germany on Wednesday.

"I am satisfied to break 6.50s twice this year and hopefully I can maintain the form in 100m track and enjoy an injury-free outdoor season," he said.

"I do not know whether I can break 9.90s this year. I can only say it is possible. But I believe that I can at least reach the same level as I did last year," the 29-year-old said.